Mehebub requested me to cook some Basanti pulao along with the Goalondo chicken curry last Sunday. While checking the stock I realized I had no cashew nuts at home and I decided to skip the Pulao.  It was Rosie who suggested me to make the Birista Pulao then! Upon overhearing our discussion Mehebub came into the kitchen and requested me to increase the amount of chicken! After all, he heard Birista Pulao!

I, though, said yes however I told him to cut the onion for the Pulao! For those who don't know; Birista Pulao is nothing but Bengali Onion Pulao. Needless to say, the dish calls for loads of finely chopped onion. I was not ready to take the pain of cutting the onion. Rosie, on the other hand, was managing Pasta and Coffee! By the way, have I told you about the newest addition to the family; Coffee Chatterjee Alam, Pasta's little sister? She is a beautiful Golden Retriever puppy we adopted a month back.

Coming back to the pilaf, I actually was happy as this dish calls for very few ingredients. Moreover, with this, I can document another Bangali Muslim recipe on my blog!

I am not stereotyping the dish however, I have had it in several Bengali Muslim households. I have not seen my MIL to cook Misti pulao much as a main. In fact, they serve Zarda Pulao as dessert.

I first savored this dish at my in-law's place. At my in-law's place, they do not like Misti pulao much as well. They mostly cook several types of savory pulao and Birista Pulao is one of those. In fact, this dish is quite common in Bengali Muslim households irrespective of their socio-economic condition. I have had this at Sabina's marriage as well. By the way, Sabina is the ex-nanny of Pasta. Debjanir Rannaghar is having a few recipes for her as well.

Mehebub loves Birista Pulao a lot and especially if served with a spicy side of meat. Pasta also loves it. She takes it as part of her lunch box even.

Birista is nothing but deep-fried onion crisps. This dish, needless to say, is known as Piyaj Pulao as well. However, the term Birista Polao is more apt as the recipe calls for Onion crisps specifically. Short-grain rice is ideal for this dish. Though Maa prefers to use Badshabhog however, I use either Tulaipanji or Gobindobhog. You can use any flavorful short-grain rice to make it. I do not like using Basmati to make this dish and Rosie also confirmed the same. According to her, Birista Pulao is earthy and hence calls for normal rice instead of "Biriyani rice" (read Basmati).

I must tell you, Rosie helped me to curate this recipe. She herself is a Bengali Muslim from a suburb. Rosie is actually Sabina's sister and is an amazing cook. She told me if a family cannot afford Biryani as part of the marriage feast; they opt for the Birista Pulao. I remembered the amazing pulao I savored with chicken during her sister's marriage. Bliss it was.

Mehebub on the other hand while having lunch shared his memories during the Ramakrishna Mission days. Maa used to bring home-cooked food for him while he was in the hostel. 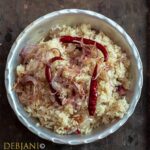 Birista Pulao aka Beresta Pulao is an easy savory pulao prepared with birista aka onion crisps. 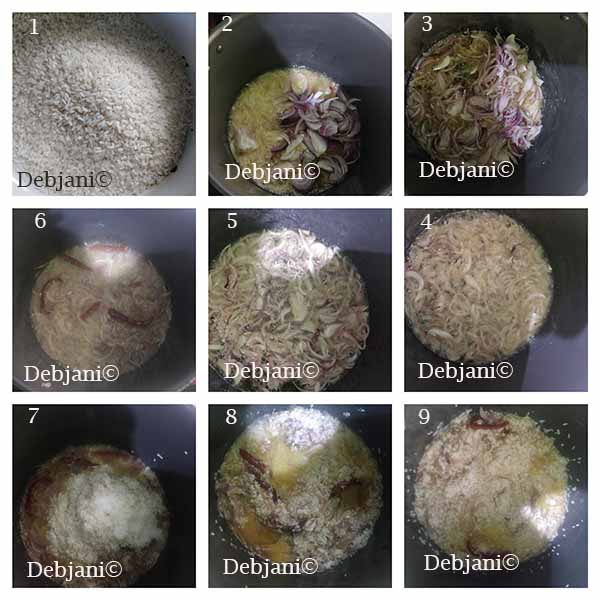 Have you tried the Birista Pulao recipe from Debjanir Rannaghar!

Here's the Birista Pulao Pin for your Pinterest Board!