Jump to Recipe·Print Recipe
I have been to Bangladesh a few days back and spent around seven days in Dhaka as well as in the nearby areas. Though it was an official trip, however, I have had sufficient me-time as well. The evenings were free and I had a day and halt to explore the city. I went to the local famous joints and tried several delicacies such as Kacchi Biryani, Beef Tehari, Morog Pulao, Dhakai Chicken Roast, Kala Bhuna and several more. I had been to Star Kebabs, Fakruddin and also Nanna's hotel to savor the famous Bangladeshi delicacies. Then I visited the Nilkhet book market as well and picked Bangladeshi cookbooks. Now that I am back and quite settled after Mehebub's operation I though to come up with a few Bangladeshi recipes. To start with, I will be sharing the recipe of Morog Pulao. 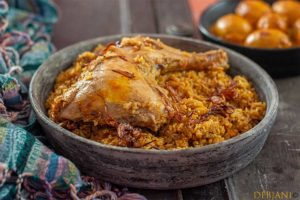 Puran dhaka is known for the food amongst other things. Once I was done with the Jamdani Saree shopping, I went to Hazi Nanna to try the Pulao. This age-old joint is especially famous for the Chicken Pulao. Opened back in 1963, at this moment they have several branches in Dhaka.

It is not that I have not had Morog Pulao before. I had it several times and in fact, I cook it at home quite often. However, what I had in Dhaka was way better.  I tried the dish in more than two joints and found the Dhakai Pulao is subtle, loaded with flavors and needs slow-cooking. I ended on talking to a few people from Dhaka to know the intricacies and they shared happily. Starting from a Baburchi to a chef to a homemaker, all were amazing all through and shared their experiences with me. 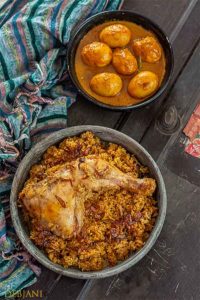 My friend's mother told me that this Puran Dhaka favorite is cooked quite regularly as part of the marriage feast and in other occasions.
One thing I must mention, this pulao though cooked with meat is completely different from Chicken Biryani. The name is Morog Pulao because to cook this cock meat is used and is considered that "Morog" meat is more flavorful than "Murgi". I gather this information from the joint where I had the Pulao
The Rice is short-grain, flavorful and different from Gobondobhog Rice. When asked, I was informed that Chinigura Rice is ideal for making this pulao. An acquaintance chef Safayatur Rahaman Mithun has gifted me the rice and I had a brief chat with him about Bangladeshi food. Mithun told me that they do not use spices such as Cumin or coriander much as we do in India. I realized how true the statement was when I made the Morog Pulao at home. Minimum spices, slow-cooking and the end result was brilliant. 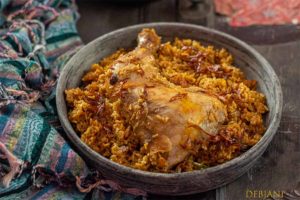 As you cannot get chinigura here, going by the texture of Chinigura, Mogra is almost a near variety but no way Gobindobhog is. Believe me, the rice makes the pulao different. 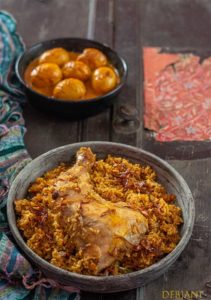 Well, when I went through the cookbooks I purchased I was confused. The books are having more than one recipe for the same dish. I then decided to go by the Pulao I tasted in Dhaka and not to overdo anything. Hence, to call it Morog Pulao or Saahi Morog  Pulao, the choice is yours. A few things to remember are:

To make the Garam Masala:

To make the Garam Masala:

To make the Pulao:

The meat to rice ragtio in this dish is 4:1
One whole chicken to be cut into four pieces and slow-cooking is must. You may refer to the picture for the exact cut.
Instead of oil only ghee can also be used or you can skil ghee completely.
The key is to cook the rice with the gravy of the chicken to make it flavorful.

Here's the Sahi Morog Polao Recipe Pin for your Pinterest Board! 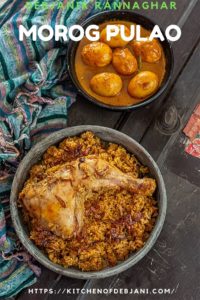