"Debjani why there is no meat in the Tehri and only veggies?" Mehebub asked while having the Vegetable Tehri last night! Probably he was trying to start the conversation 😉 given I saw him helping himself with the repeated serving of the Tehri. I mean this is what ideal husbands do ain't it especially after tolerating the wife for more than 7 years 😀 .

Well, me being his not-so-ideal wife replied "because this is Awadhi Vegetable Tehri, not Bangladeshi Tehari! By the way, Why do you ask? Don't you like it!"

He probably guessed I was not much happy with the question (which I was not) and replied: "I love it for sure but just want to know the difference wife. What is the difference between the UP Tehri and Bangladeshi Tahari? Is it same as vegetable Biryani?" he asked further.

I answered him while feeding Pasta and obviously while eating myself as much as I know about the dish. Well, let me not describe the conversation instead just the details 🙂 .

A perfect delight for winter, I love veggie-loaded Tehri or Tahiri. However, there is one question that often confuses me; is Vegetable Tehri the vegetarian answer to Biryani? Well, obviously considering the richness of the dish, the flavors Tehri is very similar to Biriyani or Pulao but there are differences as well. The use of mustard oil makes it different from typical Biryani and so does the use of local vegetables!

Coming back to my Tehri Memory, my Delhi days were full of this particular dish. Our landlady used to make killer Tahiri, yes that is what she used to call it. Though I have had Vegetable Tahiri or Tehari several times in Delhi especially during Winters, however, I first had the Awadhi version of Tehri during my trip to Lucknow back in 2011. I was there for 4 days and after having Awadhi Biryani for 5 consecutive Lunch and dinners I was looking for something different.

However, I ended up having dinner at a colleague's place and there was Awadhi vegetarian Tehri prepared by his mother! Needless to say, the taste was to die for however I found at that time a few differences between the Awadhi version and the Tehri available in Delhi.

The Tehri I had there in Lucknow was prepared with Mustard Oil and Potato and peas were the only vegetables used. When I asked Auntie informed me that Tehri is prepared with locally available vegetables and other veggies such as Cauliflower, Beans, or carrots are later included. This was what I told him and then our dinner ended with homemade Gurer Rosogolla.

The recipe I follow is the amalgamation of the Lucknow version and the Tehri I had in Delhi. I strictly use Mustard Oil but prefer to add several veggies instead of only Potato and peas. No mint in my Tehri but a few spoonfuls of Sour Curd to give extra flavor.

Tehari is immensely loved by my family and I cook it quite often in winter. The use of several veggies and rice makes Vegetable Tehari a full-pot meal.

This is how I make vegetable Tehri at home. By the way how about sharing how you make it? I would love to know that. 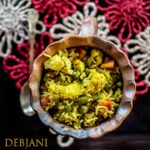 Vegetable Tehri is very similar to Pulao but there are differences as well. The use of mustard oil makes it different and so does the use of veggies! 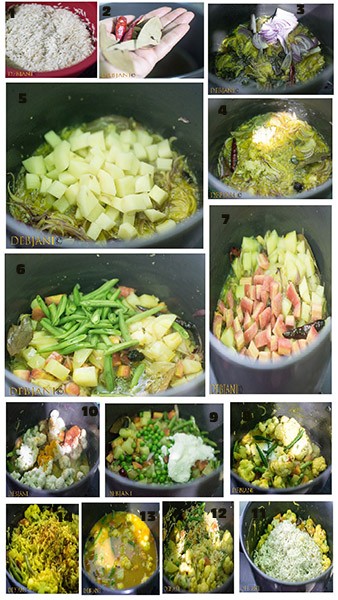