Narkel Doodh Pulao, a subtle and flavorful pulao recipe is finally here at Debanir Rannaghar. I cook it quite often. In fact, I prefer Bengali coconut Pulao aka Narkel Dudher Pulao over Basanti Pulao. This is because of the flavor of coconut milk for sure. The short-grain Gobindobhog Rice is cooked along with coconut milk, ghee-fried coconut, and also nuts, and the end result is a flavorful Bengali Mishti Pulao.

I follow the recipe I have learned from Dida. I never have seen her using packaged coconut milk to make different delicacies such as Narkel Pulao or Chicngri Malaicurry. In fact, if I have time, I also prefer to use freshly extracted coconut milk while making coconut-based dishes. In this recipe of Narkel Doodh Pulao, the rice is cooked with coconut milk. Needless to say, the end result is amazing. The smell of coconut milk, the lightly sweetened flavor matched with the spices used make this Bengali Misti Pulao unputdownable. I must mention, please use good quality ghee while making this pulao. It will enhance the flavor.

Side dishes to serve with Narkel Pulao

As the Pulao is on the sweeter side, I prefer to serve it with a spicy side such as Kosha Mangsho or aloo Gosht or Mangshor Jhol. If I have to serve a fish side dish, I prefer Bhetki Begum Bahar or Macher Kalia. However, from the Vegetarian spread, my favorites are Aloor Dum or Chanar Dalna. I generally do not cook any coconut-based curry with Bengali Coconut Milk Pulao.

If you know the tricks of using a handi to make Jhurjhure pulao, go for it. However, if you are not confident with the traditional process of using handi or dekchi while cooking pulao, use a pressure cooker or a rice cooker. It is easier to get the perfect texture of pulao if cooked in a pressure cooker or rice cooker. I will share three processes here so that you can use them based on your preference. 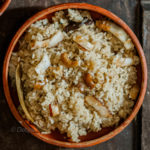 Cooking Pulao in a Handi

Cooking Pulao in a Pressure cooker

Cooking Pulao in a Rice cooker

While serving, top coconut pulao with fried chunks of coconut.

Have you tried the Narkel Doodh Pulao recipe from Debjanir Rannaghar!

Here's the Bengali Coconut milk Pulao Recipe Pin for your Pinterest Board!