It was Saturday evening and I was curdling Milk to prepare Chana for Chanar Dalna for dinner. I was having my evening coffee with my landlady concurrently as well! During our normal chitchat, Aunty casually asked me “So you are preparing Paneer at home!” Since she is also from the eastern part of the country, there are similarities in our respective languages. I told her on a lighter note “Aunty it is Chana, not Paneer and I have a plan to prepare the signature Bengali Dish Chanar Dalna today” 🙂 . Aunty asked me “what is the difference! It is just the Bong word and you are using it instead of Paneer!”

Difference between Chana and Paneer

After taking another sip of the coffee she asked (and this time with concern) “don’t you think you need to teach Pasta more of Hindi than Bengali and that is what I did with my kids when they were young. They know their Mother tongue but they are more competent in Hindi and obviously in English which’s the first language in most of the schools. I saw Pasta can recognize her body parts and even other small words both in Hindi and Bengali but in the future, it will be a problem for her in school. What if she gets confused between two languages and especially when you are residing in the Hindi-speaking state!” However, we were not been able to discuss further since Uncle returned from work and Aunty went to her flat.

But I didn’t stop thinking about Auntie’s concern that there is a chance that Pasta may get confused within Hindi and Bengali! However, I was done with the curdling process and started with the special process of discarding the water from Paneer…. Chana … It took me around 30 minutes to complete the dish. I then served Pasta's dinner; 1 Radhaballabhi along with a small bowl full of Chanar Dalna.

Chanar Dalna is not cooked with Kabuli Chana!

While having dinner that night I was discussing the incident with Mehebub. I told him that I was not able to tell Pasta that “have Paneer but I told her to have Chaanar Dalna.” Hubby was laughing like anything and then he spoke...

"Palak Paneer will always be Palak Paneer but not Palak Chana and it is the same for Chanar Dalna! If a child can learn two languages simultaneously without any confusion then the third one should not be a problem too. I think there is no harm to know both the popular language as well as a native language. At least we can try to let her understand both the languages and then it is going to be her choice of what to opt and how to opt.  There is nothing to do with this dish, please! Can I have some more Chanar Dalna! 😆 "

Our discussion ended there and now it is time to share some details about Chaanar Dalna Recipe!

Chanar Dalna is a signature Bengali dish prepared with Cottage Cheese or CHANA. For this dish, I prefer to follow my mother’s recipe. Simple light but tasty gravy with Chana and potato. We used to have it every 2nd Saturday as part of our no onion no garlic dinner. To date, Maa prepares Chanar Dalna as part of the Bhog of Jagadhatri  Puja.

My mother uses a paste of Ginger and Cumin while preparing Chanar Dalna. The same recipe is followed by the Caterer while preparing the food for the entire family on Jagadhatri Puja. In Kolkata, Chana is available in the shops. However, in Gurgaon, we always need to prepare it at home. I personally don’t like to replace Chana with Store-bought Paneer while making this dish. At times I add coconut milk to it to make the gravy richer.

Chanar Dalna is a popular Bengali side dish prepared with Fresh Chana and Potato with added Onion and Garlic. 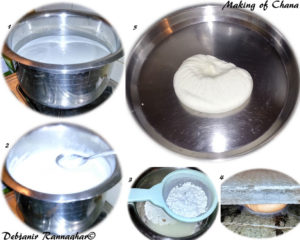 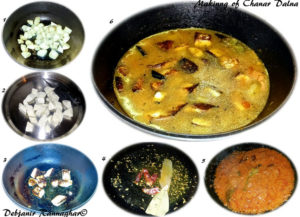 Here's the Pinterest friendly Chennar Dalna picture for you to save in your board!