It is been a long I posted a Paneer recipe. Believe me or not the last post on Paneer I have written was back in March 2017. It was the recipe of Quinoa Pulao with Spice-infused Paneer! It does not mean I have stopped cooking Paneer at home. I actually cook Paneer at least once a week for my daughter. She loves Paneer in any form! It is just that I have not captured or written those recipes here. That is the reason I have decided to come up with a Paneer recipe which Pasta loves and Mehebub hates and I eat without any complaints! Well, I am talking about Palak Paneer aka Saag Paneer.

Palak Paneer does not require an introduction. The medley of Palak aka Spinach and Paneer is indeed an amazing North Indian delicacy. I make it quite often at home. Palak Paneer serves several purposes at least at my place. Pasta does not like veggies much and she tries to throw away every single piece of veggie I serve to her except Shukto. However, She loves dishes like Palak Paneer or Sarson Ka saag where the green is cooked after making a paste. I prefer to give Palak Paneer provided the dish does not only have the goodness of Spinach but is also complemented with Paneer. It basically is a wholesome vegetarian dish.

However, serving Palak Paneer to Mehebub is a different case altogether. He simply hates it. Whenever I make Palak Paneer I ended up making something else for him. He, in fact, does not believe his own daughter loves Palak Paneer. Every time I cook it he ended up saying that Pasta is not at all like him but she is a smaller version of her mother 😛 .

The Recipe I follow for Palak Paneer is a slow-cooled one and the end result is Pistachio colored Palak Paneer instead of a Leafy green colored one!

Here I must mention; that there are several recipes for Palak Paneer available. I use the recipe I learned from the neighboring Auntie when we used to stay in Gurgaon. I have seen several people nagging about sustaining the typical leafy green color of Palak aka Spinach. However, Auntie's Shag Paneer was not typical leafy green instead it was almost the color of pistachios. According to her, this dish calls for slow cooking of the Spinach paste for the ultimate taste and the more you cook the spinach the more the chance of not sustaining the color. In addition to that, I have seen her using a good amount of fresh cream while making it which is another reason for the color. 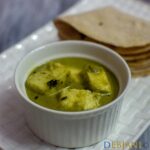 Palak Paneer is a wholesome Indian ve3geterian side dish prepared with the paste of Spinach and Paneer. 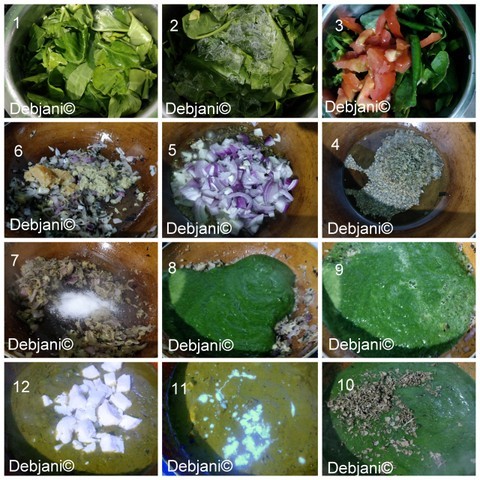 Have you tried the Shag Paneer recipe from Debjanir Rannaghar!