"Cara do you know how to make Ilish Macher Korma? I mean the authentic one!"

"Why do you ask? BTW I know how to make the Ilish Macher Korma though I can not comment on the authenticity! You know, there is nothing called authentic, food goes through the evaluation as well! At least that is what I feel"

"Got it, Cara! Actually, I had it last week while having the Bengali lunch out with friends; so just thought of having it at home!""BTW why are you calling me Cara, all of a sudden! Your Italian sucks! Errrrr"

"BTW why are you calling me Cara, all of a sudden! Your Italian sucks! Errrrr"

"Hmmm and your English sucks and that makes us a team"

"Okay, can we have some Debjani-made Ilish Macher Korma Wifie! Also, tell me one thing why do you always make Ilish with Shorshe bata or Doi; what the fascination is all about"

"Because I am a ghoti; what more can you expect other than Ilisher Shorshe Bhapa! Ilish with Onion Garlic is typically not my thing! Well, you don;t understand. I have never seen your mother cooking Ilish; Your place is full of vegetarian and Choto Mach (small fresh water fish); not that I am complaining. She, after all, is a great cook and learned the best Postor Halwa from her!

"Okay,  so the MIL got a compliment from you! Anyway, I love Ilish and can we please have the Ilish Macher Korma!"

"By the way Mehebub I actually liked the Cara thing!"

Okay, it just was part of the typical domestic conversation which didn't end there! However, I ended on cooking the Ilish Macher Korma when Mehebub ended on coming home with a 1.5 Kg Ilish mach from Lake Market! It is not that I was willing to make it as I always crave for Ilish bhapa or Doi Ilish or Ilisher Jhal but at times you need to cook Man's favorite as well! After all, he was calling me "Cara" that too after 7 years of marriage!

Coming to the Ilish Macher Korma, this is not a typical Indianised dish prepared with Hilsa! In fact, as much as I know this dish is originally from Bangladesh however, a reader wrote on my Insta post that this is not a Bangladeshi way of cooking either! I was quite surprised upon reading that however, I don't have any more reference on this!

Ilish Macher Korma is a rich preparation of Hilsa, where it is cooked in a gravy of Onion, Garlic, Ginger.

Even little Cashew nut paste and Garam Masala are also used which obviously a bit unique. Ilish has its' own taste and I prefer to use moderate spices to keep the original flavor of Ilish intact. I prefer to use big size Ilish to make this dish as bigger the Ilish tastier it is and aromatic as well.

I found Pasta enjoying the gravy probably because it was a bit on the sweeter side.  Mehebub told me that enjoyed the Debjani-made Ilish Macher Korma and that too again with a "Cara"!
I suppose I should now share the recipe so that you can try my version of Ilish Macher Korma. Do try it with a spoonful (or maybe more) of Steamed rice ( or should I say Gorom Bhat) and let me know how it comes out!

Here's how I make Ilish Macher Korma at Debjanir Rannaghar!

The big the size of the fish from which the pieces have been taken, the tastier is the dish.
You may increase or decrease the spices as per taste.
Ghee can be skipped for a low-calorie version

Have you tried the Ilish Macher Korma Recipe from Debjanir Rannaghar!

Do let me know how it came out. Also, I would love to see a picture of the same which you can share here on dolonchttrj@gmail.com. In Instagram, you can use my hashtag #debjanirrannaghar or can tag me at @foodofdebjani.

Here's the Ilish Korma Pin for your Pinterest Board! 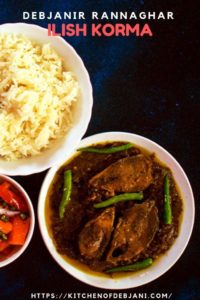