I clicked the pictures for this post almost one year back. In fact, I have not cooked Sada Ilish aka Ilish Panikhola yet this year. I am waiting for the Ilish to enter the markets after the breeding season. Not that Ilish is not available however, we try not to purchase Ilish during the breeding season.

It was Mehebub who reminded me of Ilisher Pani Khola while having dinner last night. He actually was craving the Bengali Hilsa Stew. Yes, you read it right; Hilsa Stew. You will understand upon reading the recipe why I am referring to stew. As I already have the pictures, I thought to update the blog with the recipe.

I first had Sada Ilish long back at a friend's place who was from the same University as I am. Kakima, (her mother) had her ancestors in Barishal, Bangladesh. Then, back in 2006-07, I was not aware of any dish of Ilish apart from Ilish Beguner Jhol which can be considered light! To me, then, Ilish was about the rich gravies; mostly prepared with Mustard, coconut, or curd but not a stew-like dish. Needless to say, when she served the pale light Ilish curry I was not much impressed! However, I ended up asking for two more servings of the gravy and rice after having it!

When asked, Kakima told me that a particular dish was Sada Ilisher Jhol or Ilisher Pani Khola. The name Ilish Pani Khola was quite funny (to me) though I understood why "Sada." Sada stands for white and in this Ilish preparation the light gravy was pale; almost white. It was then I asked for the recipe and Kakima shared.

Mehebub had it for the first time when we were in Gurgaon. He thoroughly enjoyed having the light fish curry. In fact, he prefers Ilish Pani Khola over Ilish Bhapa or Doi Iliish.

The recipe of Ilish Pani Khola through easy, however, requires tedious onion mixing. The recipe calls for very basic ingredients and is light as compared to other Ilish Mach recipes.

Here's how I make Ilish Pani Khola at Debjanir Rannnaghar! 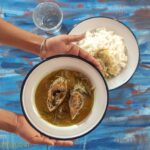 Ilish Pani Khola aka Sada Ilish is a light curry prepared with Ilish mach and also almost no spices apart from salt and green chili. 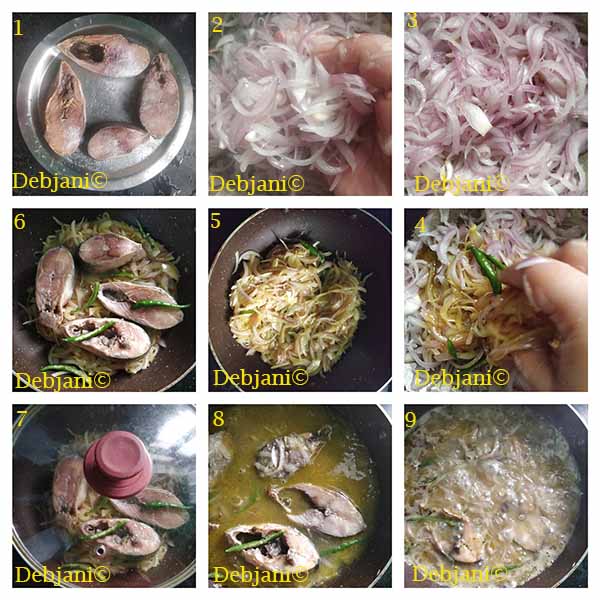 Have you tried the Bengali Ilisher Pani Khola or Sada Ilish recipe from Debjanir Rannaghar!

Here's the Ilish Panikhola Pin for your Pinterest Board!