It could have been a regular tasting, however, it was not! The Gateway Hotel EM Bypass Kolkata's Ilish festival is full of surprises this year. This year their Hilsa menu is specially curated by Bengali actress Madhabi Mukherjee! Two dishes of her, Ilish Macher Matha diye Badhakopi and Anaroshi Ilish are part of 2018's Rupoli Itikotha Hilsa Festival along with some of the amazingly cooked dishes by Chef Deep Mitra Thakur and team! 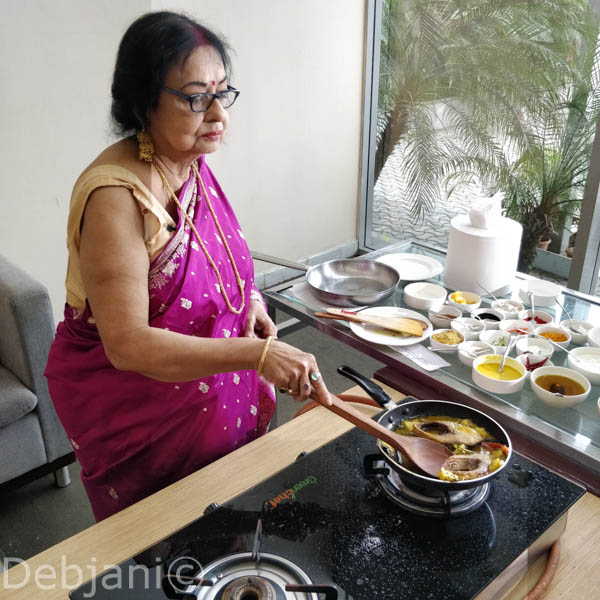 It was the time of board meeting at the office and I was not sure whether to go for the event or not! Then there was baba and his horrifying remark " Please go dolon and meet charulata and also come up with a picture. Do something productive!" I was about to ask my father what exactly he meant to say but decided to keep quiet! I was running late! It took me 30 minutes from my office (sector 5) to reach The Gateway Hotel EM Bypass, Kolkata and I probably requested the Cab driver 50 times to hurry! How could I not! After all, I was about to meet none other than Madhabi Mukherjee and about to savor Ilish dishes cooked by her! Upon reaching the hotel I saw her cooking Ilish Macher Matha diye Badhakopi as well as Anaroshi Ilish!

I found a big bunch of guests talking to her and also found her talking about her Bangladesh days as well as about Ilish Mach! I was quiet! In fact, I was just witnessing her cooking with the support of home chef Sukanya. Still beautiful and poised, she was cooking with ease! 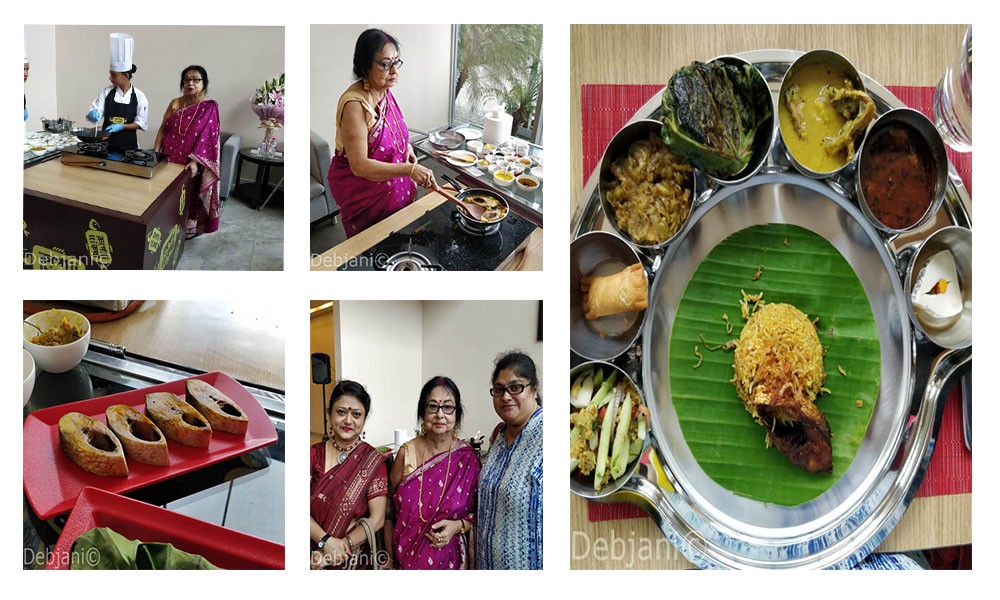 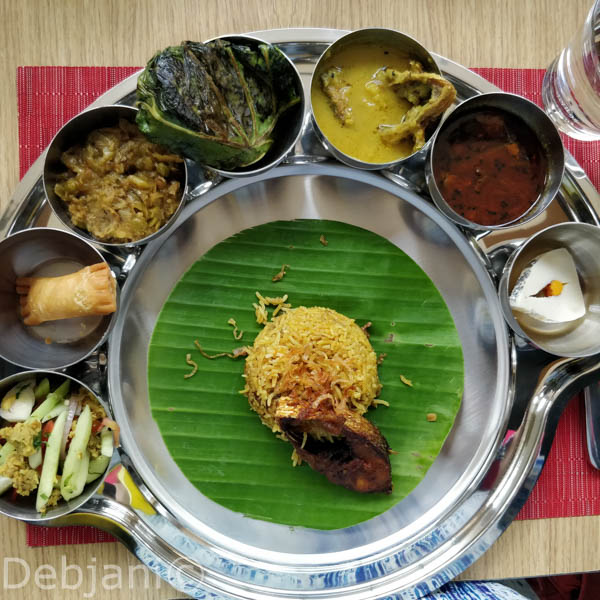 You may ask, why I am emphasizing only on the Ilish Macher Matha diye Badhakopi but not Anaroshi Ilish! The reason my friend is, I always prefer the dishes cooked with fish head or tail instead of the dishes cooked with the fillet (or body). I believe it takes a lot to use the almost discarded parts (not by the Bengali's though) while cooking.

Needless to say, I was happy with the Ilish Pithe and Ilish Salad beside other dishes we had as part of the thali. Kochu Patay Mora Narkeli Ilish indeed was a surprise. At the same time, nobody (including people having their base in Bangladesh 😉 ) were able to identify Kochu Pata (colocasia leaf). I must mention the Ilish Pulao as well and last but not the least Ilish Peti Sandesh. For me, the Thali is actually a good deal considering the portion size and variety of items and not to mention strong cooking skill! 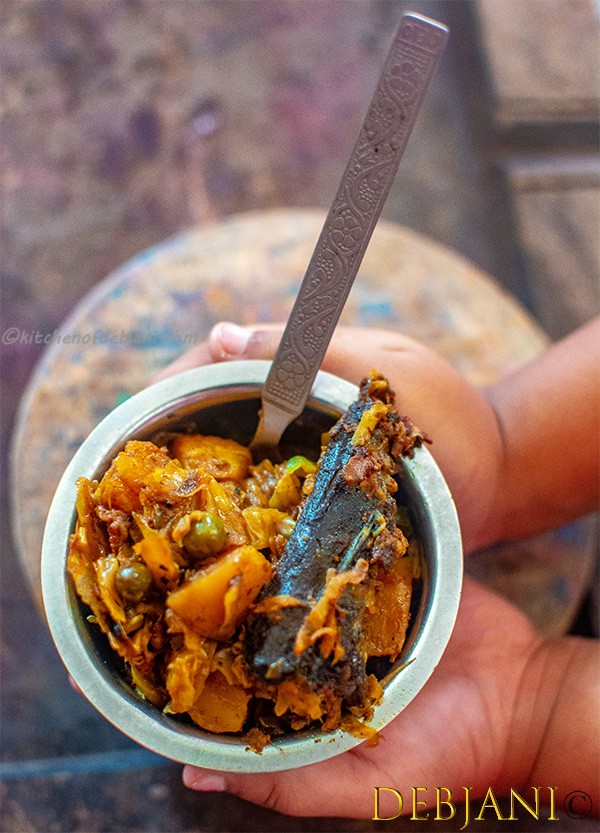 I was quite busy that day to eat and ended on clicking a very few pictures. However, I decided to cook one dish upon returning home and requested them to share the recipe of Ilish Macher Matha diye Badhakopi. As a matter of fact, I cooked the humble Ilish Macher Matha diye Badhakopi at home and everybody enjoyed it thoroughly.  Moreover, Pasta decided to be the hand model for me and here is what I clicked.

Coming to the dish, Ilish Macher Matha diye Badhakopi, is nothing but Macher Matha Diye Badhakopi cooked with Potato as well as Peas. Coupled with regular spices and tempering, it is very easy to make. Furthermore, Madhabi di was talking about slow cooking, which actually is advisable for any dish prepared with Cabbage or Badhakopi. 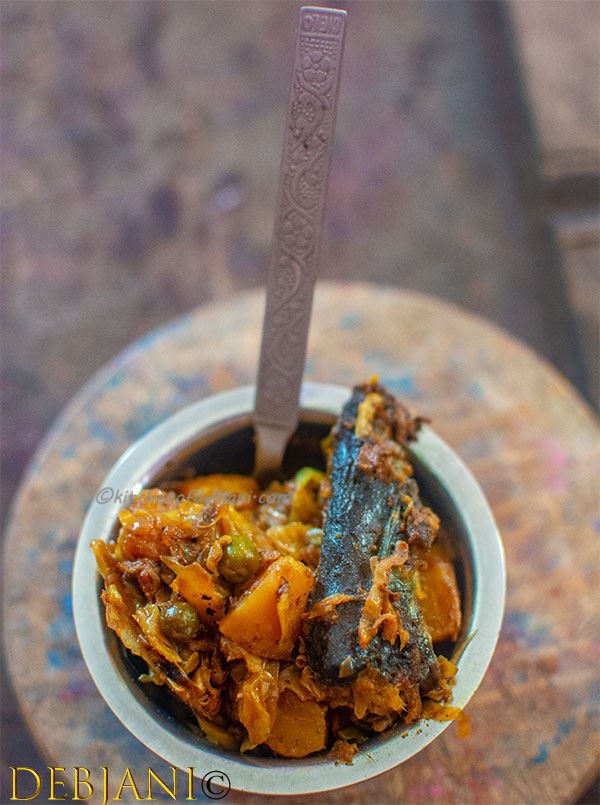 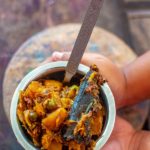 Have you tried Ilish Macher Matha diye Badhakopi Recipe from Debjanir Rannaghar or visited Gateway hotel during the Festival?

Do let me know how it came out. Also, I would love to see a picture of the same which you can share here on dolonchttrj@gmail.com. Similarly, on Instagram, you can use my hashtag #debjanirrannaghar or can tag me at @foodofdebjani.

Disclaimer: I was invited by the management of The Gateway Hotel EM Bypass Kolkata for the Rupoli Itikotha Festival.