A simple, comforting vegetarian dish, in fact, a dish that contains all the easily available vegetables (well, in India), Avial or Aviyal is what intrigued me for the last few days. Not that, I was not aware of what Avial is or how it tastes. I have been to Kerala more than 4 times and till last year was quite regular in the southern part of the country for official assignments. Naturally tasted Aviyal several times. In fact, I make it quite regularly at home. We love the comforting taste of Aviyal. Prepared with several veggies, flavored lightly with minimum spices, and cooked with Coconut. It goes perfectly with our portion of rice. I actually cook it at times instead of Shukto at times given I found the dish strikingly similar to the Bengali delicacy, especially the way the ingredients are used.

When I planned to pen down the recipe of Aviyal, I started gathering interesting facts naturally. The first thing that came to my mind was the similarities between the dishes I mentioned above. Both the dishes, Aviyal and Shukto are the amalgamation of several vegetables, both are comforting and curry-like, both are served with rice and both surprisingly are from the coastal area. Avial is a famous Keralian or Udupi side dish while Shukto is a famous side from Bengal. For that matter, it is worth sharing that Avial itself has several variations; there is Keralean Avial, then there is Udupi Aviyal, and also another version called Tamilian Brahmin style Avial. Though there is very little difference between the versions mentioned. All are having several vegetables and is a no onion no garlic preparation.

I found one more dimension while searching the history of the vegetarian delicacy, that Bhim, the 2nd Pandabh from "Mahabharat" had invented Avial. As the story goes, The Pandabhas and Draupadi were in exile for 13 years and they were in Virat dynasty in the last year of their Exile. They were there with a false identity to adhere to the terms of exile. Bhim took the pseudo-name Ballabh during the Pandabh's as well as Draupadi's stay at King Virat's residence during the "Virat Parbha". Bhim worked as the royal cook for one year and invented a dish which was having several vegetables and coconut in it which he named Avial.

Avial, a dish from Thiruvithankor!

There is one more story about the evaluation of Avial which says it was invented by the cooks from Thiruvithankor in Kerala who were responsible for making bulk food for an event at King's residence. To cover up the shortage of curry they ended up making a mix-veg which they named Aviyal! Whoever invented it, indeed came up with an amazing dish.

Avial is an integral part of Kerala cuisine

Coming to the present day, Avial is an integral part of Kerala cuisine and one of the main items served as part of traditional Sadya. Apart from Aviyal traditional Sadya is having Kerala Matta (rice), Parippu, Sambar, Kaalan, Olan, Koottukar, Erissery, Kichadi, Pachadi, Pulisseri, Injipuli, Thoran, Pappadam, Sharkara Upperi, Kaaya Varuthathu, Banana, Payasam, etc. You may check my post of mine on the Onam Sadya I have tasted at ITC Sonar.

As I already mentioned Avial is prepared using several vegetables and coconut is an integral part of this vegetable curry. I have used Potato, Carrot, Snake gourd, Drumstick, Beans, Raw plantain, Raw Mango Elephant foot yam, and a few chunks of Cucumber while making the Aviyal. You may add pumpkin or any other vegetable you prefer. Some people skip Curd too however, I like my Aviyal with Curd. Raw Mango again is optional. It gives a natural sourness to the dish. 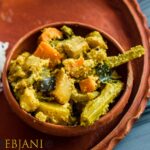 Avial is a famous Keralian or Udupi sidedish prepared with several vegetables.

To make the Paste: 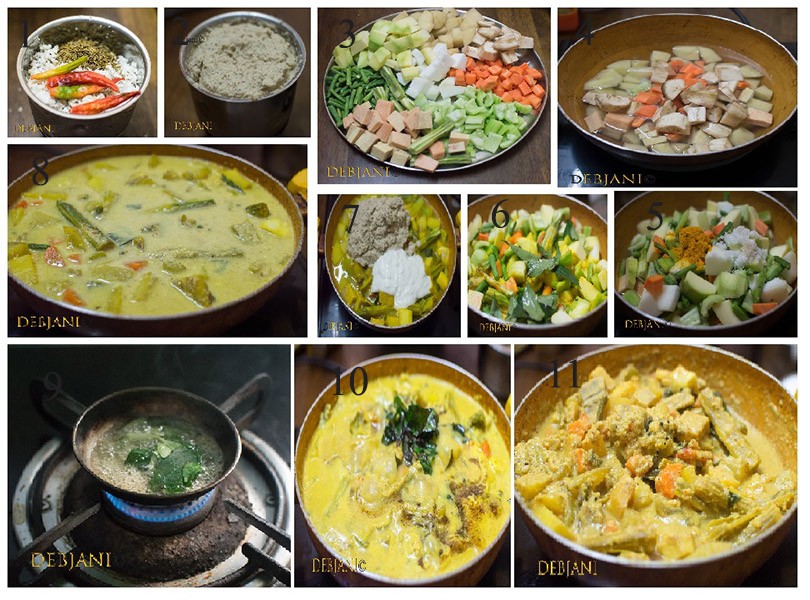