It was a lethargic evening and I was having a cup of Soth Indian Filter Coffee that I made for myself. Pasta came to me and snuggled and asked for a sip of the coffee. I have given it to her knowing how much she loves the taste of South Indian Filter Coffee. Then only it occurred to me I haven't told her the story related to Coffee and I told her while patting her back “Pasta momma is going to tell you a beautiful bedtime story tonight!" 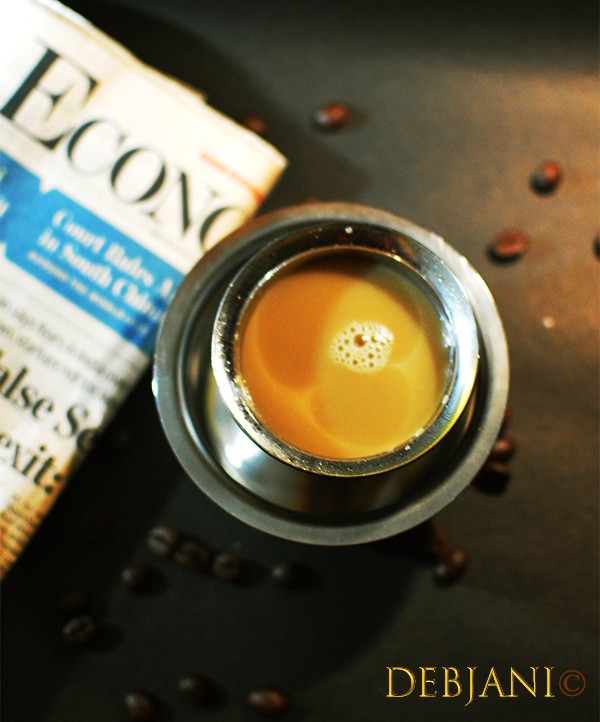 “Yes, darling but it is coffee, not Kopi or it is better to say the story of South Indian Coffee or South Indian Filter Kaapi”; and then Momma told the story to the little pumpkin. Though not something like a princess’ diary, however, for Pasta’s Mom (even for Pasta) the story was special; really special!

On this note let me share the story of 7 coffee beans and Sufi saint Baba Budan, the man who introduced Coffee to the Indians through his unique journey. It was said that Baba Budan visited Yemen back in the 17th Century while returning from Hajj Pilgrimage. He noticed a unique beverage that the Yemeni people used to drink. Then he found, people grinding some brownish beans after roasting which then converted into a hot beverage known as Qahwah. He tried the beverage and found it unique in every aspect and aware of the name of that bean; coffee it was. That particular place of Yemen was known as Mocha and was the hub of coffee. 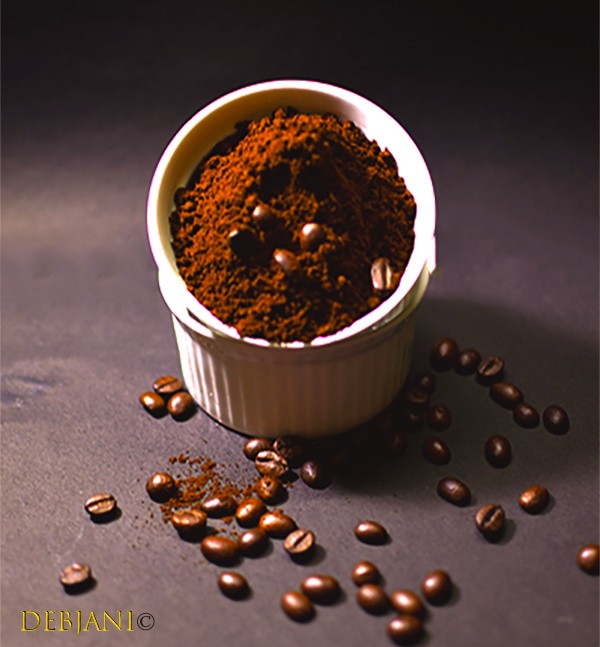 He was told that coffee beans were discovered by a Somali goatherd. He then decided to take coffee beans to his country (India). However, soon he found that Arabian people will not allow him to carry coffee beans. They were aggressive about their control over coffee. The only option left to him was washing but to carry roasted coffee which means no re-growing at all. However, he then decided to carry few coffee beans secretly to his country. It’s said that he had 7 coffee beans when he returned to his place at Chikmagalur, in Karnataka. Upon returning to India he planted those seven coffee beans therein Chikmagalur and the magic happened. The beans grew and as a result, his action we have our own coffee hub of the country, the southern part! Here ends the story of Baba Budan and 7 coffee beans and the journey of South Indian Coffee started with poise! 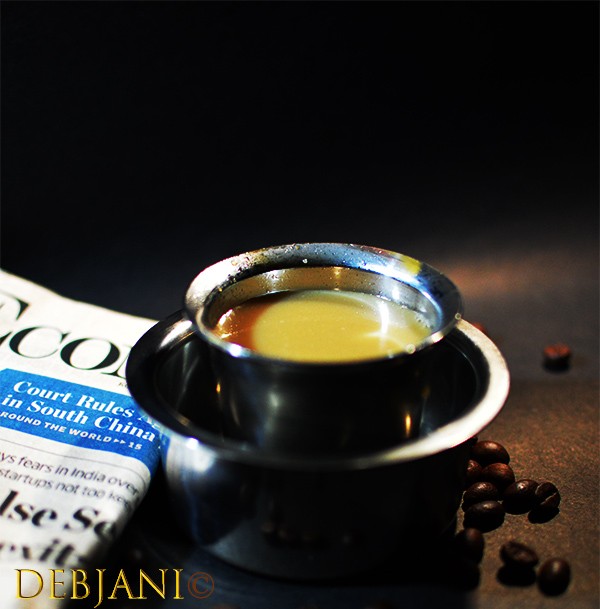 This post is planned for last 1 month. Believe me, I didn’t have anything to write about the South Indian Filter Coffee or Indian filter kaapi or maybe Mysore filter coffee or Kumbakonam degree coffee or Mylapore filter coffee or Madras kaapi whatever you call that small glass full of hot drink apart from my experience of having it several times in several places. Then I started reading about the origin. I found some very interesting notes including an awesome writing by R K Narayan. Being a true blue bong I am not from a family who drink coffee vigorously. In fact, during my childhood, we used to have coffee (typical instant one) only during the winters along with a huge portion of milk. However, I always prefer my coffee without milk. I tried filter coffee for the first time when I was in Bihar for a job assignment back in 2009.

I used to stay with a Bong family at Gaya as a paying guest. This was my first time living outside a metro city and that too a place which was considered then as part of India’s one of the popular Naxalite zone. I used to work as a United Nations Volunteer there. The place was completely unknown to me.  I had no friends there, neither any leisure option after work. It was the time when I started writing about food. However, coming back to coffee, my landlady was an avid coffee drinker. When she found I am a person of 6-7 cups of coffee a day; she introduced me to the world of filter coffee.

She used to order the coffee from South India. Alike me she also was a person of black coffee.  After that, I have tried different types and to be very frank the thing we used to drink there was not that good if I consider the taste today. Auntie told me about the use of Chicory as well. Chicory is a flowering plant whose root is dried and mixed with coffee powder. What Auntie told me that it is done to make the coffee cheap. I found that reasoning quite true after trying both the options then one point of time started searching for more details. There are actually several documents available. This one on Chicory is quite handy.

Now you may ask, why I am writing about so many things instead of South Indian Coffee for which the post is meant for! Well, actually you have to bear with me this time.  I have many things to share, so many things to write just for the sake of my portion of coffee. After all, R K Narayan wrote a full article about his love for Indian coffee. Refer My Dateless Diary: An American Journey.  I am nothing but tempted to quote-unquote him "Black or White? “Neither," I said haughtily. The server looked up rather puzzled. "What do you mean," he asked. "I want it neither black nor white but brown which ought to be the color of honest coffee- that's how we make it in South India". The entire article is full of every minute detail of South Indian Coffee, even the process of making it properly. 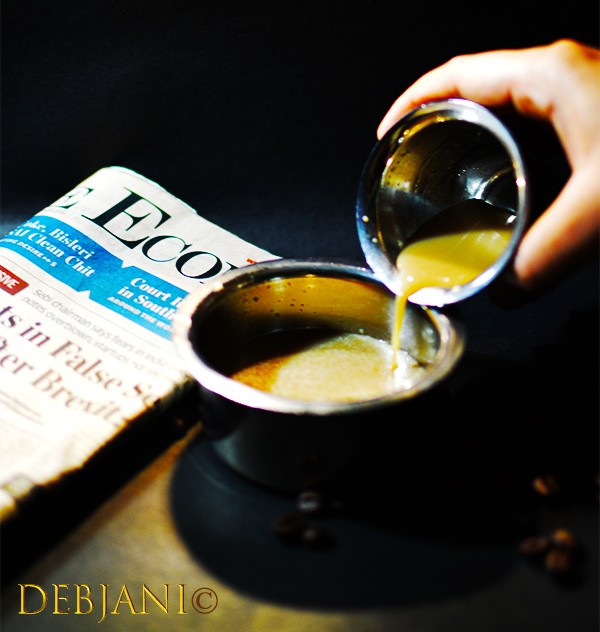 Finally coming to the recipe of South Indian Filter Coffee, I learned it from a South Indian Colleague of mine. Though I am not an avid fan of coffee with added cream. However, this particular variety is something different in it! The texture, not so fancy taste but the roughness within, something truly Indian. In my place, I have a basic French press that I am using probably since last 3-4 years to make my cup of espresso. However, a few months back I was gifted with an Indian press, a coffee glass, and a bowl along with a pack of coffee by a South Indian friend of mine and she taught me the process of making the South Indian filter Coffee as well.  As I mentioned I have had the South Indian Milky frothy coffee several times during my official trips in Chennai. Several times in Delhi as well. I found it quite good for a palate change from my espresso. However, I never made South Indian Filter Coffee at my place. After having the entire set gifted I sometimes make it change the taste, It works just perfect. 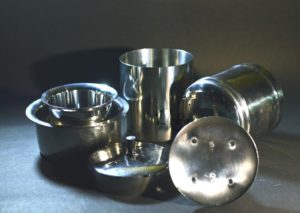 Finally coming to the recipe, yes you need your Indian coffee press to make a cup of perfect South Indian Coffee. This is neither a fancy thing not tricky to find. You can order it online as well (details are given below).  To make South Indian filter coffee you need medium roasted coffee beans; preferably Arabica and some people use Robusta as well. The ground should be fine. Addition of Chicory is quite common but I personally don’t like the use of Chicory. The South Indian brewer is a combination of two adjoined cups where the topmost one is having small holes and a disk with holes is a removable part of it. this is used to press the coffee and a lid is also provided to cap the filter.

The top can be connected to the bottom cup to brew the coffee. After loading the top (and placed on the bottom cup) with coffee powder the disk is used to press the coffee and then hot water to be poured over the coffee and the lid to be placed.  The coffee liquor then drips through the hole of the top cup to the bottom and that is how you should make South Indian Coffee Decoction. The Decoction is really strong and hence paired with full cream milk and sugar. A traditional Deborah or Debra (a set of a small tumbler and bowl) is something South Indians prefer for serving the coffee! 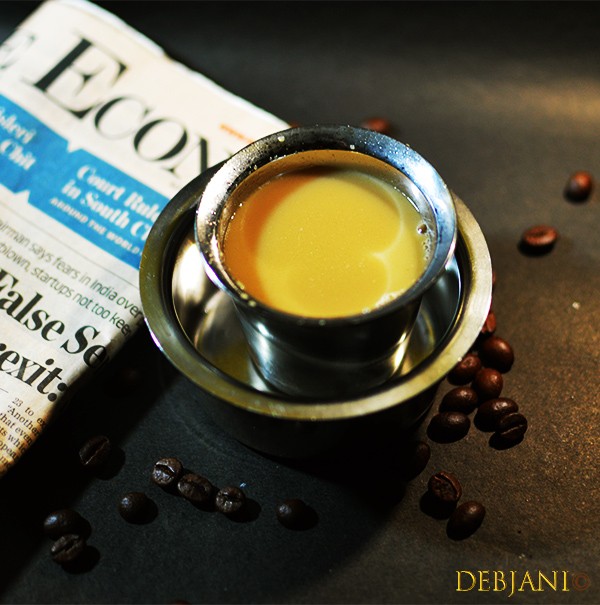 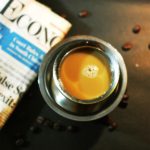 South Indian Filter Coffee or Kaapi is a coffee-based beverage prepared with coffee powder and milk. A traditional Indian coffee filter is used to prepare the decoction and the drink is served in a traditional glass and bowl set called Debara.

To make the Coffee Decoction: 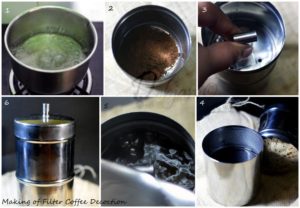 If you are not available with a Debara set just use a normal cup and a bowl to make the froth.
Adjust coffee, milk, and sugar according to your taste bud.