This blogpost on Neem Begun was not planned which you can understand by the quality of the pictures I have used. However, I thought to share the recipe of a few dishes including this I am cooking these days while we are isolated and at home to combat the outbreak of COVID-19. All the major cities in West Bengal are under lock-down and we are home-bound for the good. I called my house-help not to come and I promised to give her the full salary when this phase is over. 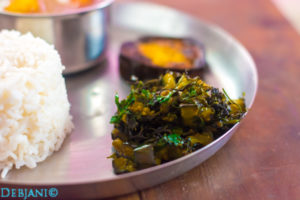 We are cooking once in a day and that too very basic meal which for sure is nutritious enough. This is to restrict over-purchase and to utilize what we are already having at home. One Eggplant is being used in making Neem Begun (stir-fried eggplant and Neem leaves) for us and a Begun Bhaja (fried Eggplant) for Pasta. I cooked Dimer Jhol which is excessively runny so that another curry or dal can be ignored.

Pasta is getting bored at home and not much willing to read or write. I have given her some cream to make ice cream with two conditions: she has to make it her own and she will wash the utensils as well. I have instructed her to have one spoonful ice cream each day.

These restrictions are not typically out of panic. In fact, when it comes to storing groceries, I overly store things. I travel a lot for work and hence, prefer keeping things at home. At least, so far. The outbreak followed by the staying at home phase is a learning for me. When I checked the stored materials I have, I was ashamed. I don't think in the future I will purchase things unnecessarily. 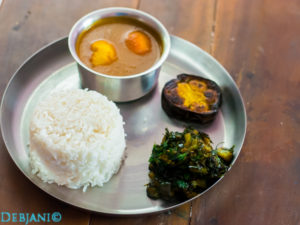 Benefits and Uses of Neem Leaves! 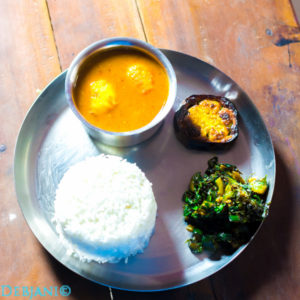 In India, specifically in Bengal, we use Neem leaves in cooking especially during the months of March-April. It is said that having neem reduces the chance of having pox. We mostly stirfry Neem with Eggplant which is known as Neem Begun. We make Titar Dal with it or at times we just fry it and serve with rice. Neem Aloo Bhate (Mashed Potato with Neem leaves) is another delicacy we cook with Neem leaves. 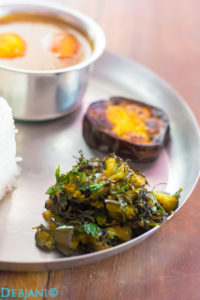 Neem Begun, a stirfry with Neem leaves and Eggplant!

The recipe of Neem Begun calls for very basic ingredients apart from the two veggies. You just need some salt, turmeric and mustard oil to make it. The Eggplant is cut into small cubes and then marinated with salt and also turmeric powder. The neem leaves and eggplant then stirfried with little mustard oil. The mixture of soft eggplant and crisp neem leaves go amazingly with steamed rice. In the Bengali households, Neem Begun is very common during the spring season as Neem is said to be work against chickenpox. This bitter delicacy is easy to make and for sure tasty enough. I  in general buy Neem leave a day back and keep them by dipping the stem in a glass full of water. 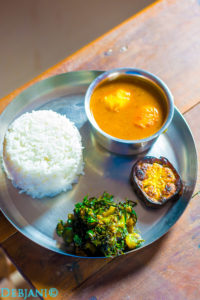 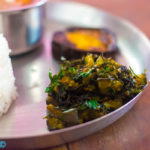 Have you tried the Nim Begun recipe from Debjanir Rannaghar!

Here's the Neem Begun Recipe Pin for your Pinterest Board! 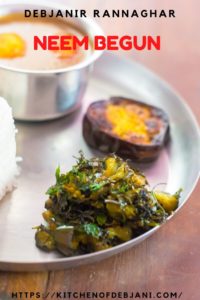