Jump to Recipe·Print Recipe
I think I have written about the only-veg Saturdays several times over here at Debjanir Rarraghar. How can I not by the way? Growing up in our Central Calcutta household,  I never ever liked the Saturdays loaded with Borir Jhal, Borar jhal, Dhokar Dalna, Begun Basanti, Thor Ghonto, Helenchar Bora, Thankuni pata bata, Polta Patar Bora, Borar Ambol, and many more! It took me years to savor the Bengali vegetarian dishes. I started liking those when I was away from home; when it was easy to cook non-veg. 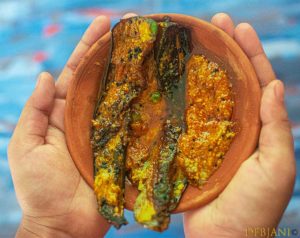 As you are already here on this particular post, you already know what this post is about. Yes, I am going to write about Begun Basanti. Oh, let me write like a bong; Begun Bashonti! Once I asked Maa about the weird nomenclature of this particular dish where Eggplant is cooked with a mixture of Mustard paste and Yogurt. Maa's answer was quite funny. Maa said "the Begun is quoted with Bashonti colored gravy that is why! Emagine the begun is wearing Bashonti Saree and eat it without any further fuss!" Let me tell you, the light yellow color is known as "Bashonti in Bengali! This color is synonymous with Saraswati pujo. 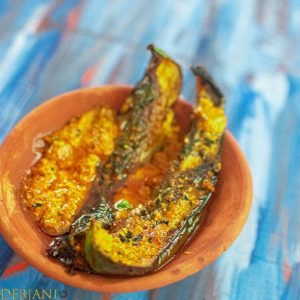 Talking about the homecooked Bagun Basanti, it was never been regular at home though Shorshe Begun was. Either on the Saturdays for the entire family or on any day for Mammam Shorshe Begun was regular. Mammam my aunt was a widow and she never had non-veg after Mejo Jethu's demise. In our place, everyday Vegetarian food has always been regular initially for Thakuma and then for Mammam as they opted for vegetarian food willingly. I never understand this ritual of Widow's having vegetarian aka satvik food. However, little I have faith in the custom I have seen ample vegetarian delicacies cooked at home. 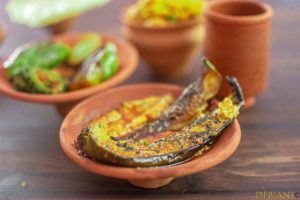 Begun Basanti was meant for special occasions back at home. The everyday Mustard paste was mixed with Tok Doi (Plain curd) for the added flavor and with the tempering of Hing and green chilies, Basanti was prepared. In the winter, few green peas were added and that was what made the Bagun Basanti special at home. I still follow the recipe I got from Chatterjee's. A thick, rich sweet and sour gravy cooked with mustard paste and yogurt with added green peas and the long fried eggplant cooked with this gravy. No dominating spices are to be added apart from regular, chili, turmeric, salt and also sugar. 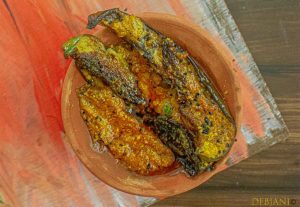 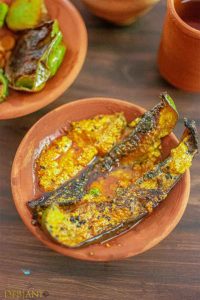 Have you tried the Begun Basanti recipe from Debjanir Rannaghar!

Here's the Bengali Begun Bashonti Recipe Pin for your Pinterest Board! 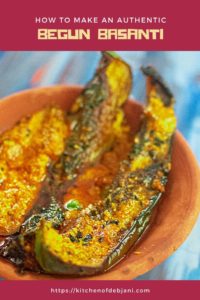