Niramish Ghughni is a famous Bengali dish cookied with Yellow Pea. Be it after Bijaya Dashami or any uninformed visit to her, Dida was always kind enough to cook the best Niramish Ghugni for me over the years with fried sliced Coconut. Neither dry nor runny, a bit messy and with a few peas intact, with the fainted smell of Ghee, Narkel diye Niramish Ghugni was something I always cherished. Ghugni or the famous Bengali style Yellow pea curry is something probably cherished best with Luchi by the Bongs. However, I do follow three different recipes while making Ghugni, or should I write Ghooghni.

Ghugni Chaat is another form where a few condiments added after cooking to make the Ghugni spicier and almost a Chaat. Coming to the different recipes I was talking about, I already have shared the recipe of Mangsher Ghooghni (Yellow pea Curry with minced mutton) here in Debjanir Rannaghar. Another form of Ghugni is, however,  the No Onion No Garlic one or the Niramish Ghugni, as we call it. As I already mentioned in my Mangsher Ghugni post, how this dish is an important part of the Bijaya Dashami Platter at my North Calcutta residence.

“Dida” used to make a thick version of the Ghugni with no added onion and garlic but with potato chunks and fried coconut strips. After Dida, “Boromashi” took the responsibility to keep the legacy on. Till date whenever I visit Mamarbari, two dishes are mandatorily served, Narkel diye Niramish Ghugni and Niramish Sukno Aloor Dum (No onion no garlic dried Dum Aloo). This particular version is on the rich and thicker side if compared with the Mangsher Ghugni or the runny Ghugni that is served with Luchi in Bengali Mistir Dokan or the roadside stalls.  I will share the Roadside Ghugni recipe some other time but this post is meant for the Narkel diye Niramish Ghugni. Recipe courtesy is none other than my late grandmother from my mother’s side, Dida. Dida had a great influence on my cooking, especially when it comes to vegetarian delicacies.

I prefer the Narkel diye Niramish Ghugni, served with hot Luchi and obviously with some other side dishes such as Begun Bhaja, Aloo Phulkopir Dalna etc. In fact, I made the Niramish Ghughni a few days back and I was tempted to write about the Narkel diye Niramish Ghugni naturally. While writing the post, I traveled back to the memory lane. My childhood, spending lovely days at Mamarbari during the winters or summer break every year, maybe the best phase of my life.

We, the cousins used to visit dida in Howrah and after having our lavish dinner (which mostly used to be a vegetarian affair) our nights were fun-filled with Chitchat and listening to golden oldies.  We happened to have a BPL tape recorder for that venture which is, however, a different story altogether. The days have gone and I have only the memory left and the recipe of Narkel diye Niramish Ghugni, as I learned from Dida. 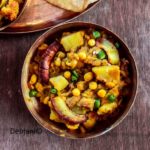 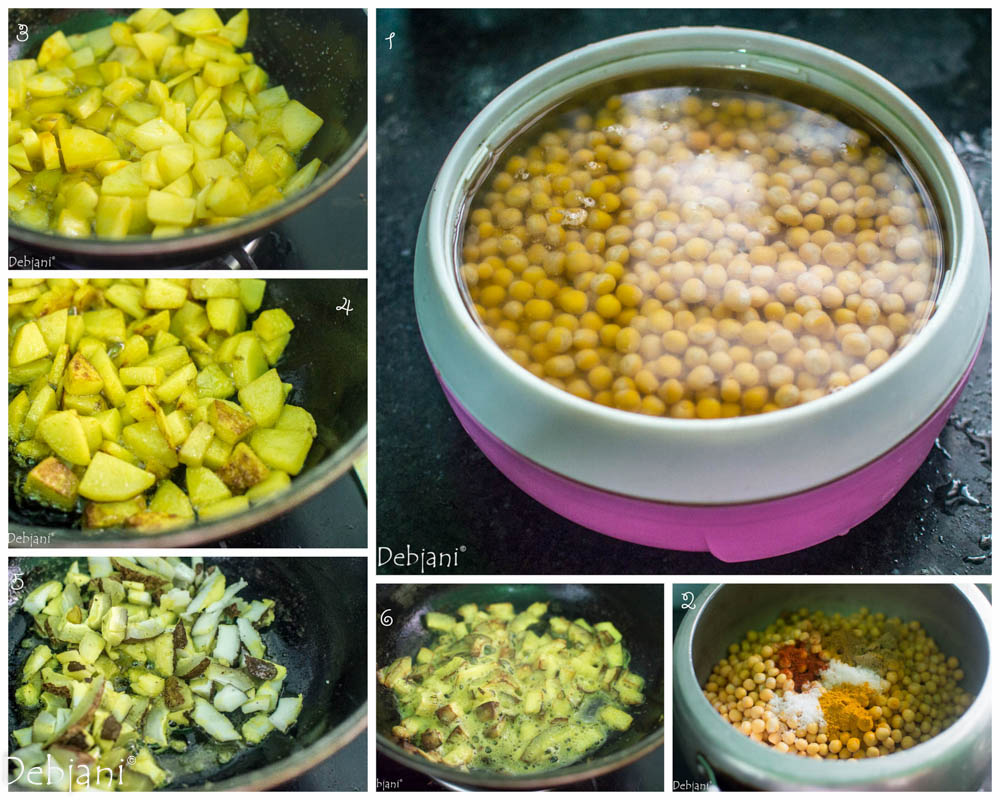 Have you tried the Narkel diye Niramish Ghugni Recipe from Debjanir Rannaghar!

Do let me know how it came out. Also, I would love to see a picture of the same which you can share here on dolonchttrj@gmail.com. In Instagram, you can use my hashtag #debjanirrannaghar or can tag me at @foodofdebjani.