Bengali Sheemer Jhal aka Shorshe Sheem is a tangy vegetarian and vegan Bengali side dish cooked with broad beans. Yes, you read it right! This is a Bengali Vegan delicacy!

Now that winter is here; Sheem aka Broad Beans are available in abundance in Kolkata. I love this particular winter vegetable a lot and especially when cooked with Mustard paste! Needless to say, I am purchasing them every alternate day to make either Sheemer Jhal or Sheem Bata.

I think my ghoti root is to be blamed for my obsession with Jhal of any kind. By Jhal, we Bengalis refer to the curry-based Bengali dishes prepared with an overdose of Mustard Paste. Bengalis and to be specifically the Ghoti clan (who are having their origin in West Bengal) love their portion of Jhal along with Gorom Bhat and I am no exception. Bengali Macher Jhal is widely popular and whenever we talk about Jhal we mostly refer to the fish curry. However, there are several Jhal preparations available that are completely vegetarian. With this post, I am going to share one such vegetarian Jhal recipe which is nothing but Sheemer Jhal.

Before going further with the recipe I must thank a friend who indirectly boosted me to come up with this post.

It was a Facebook post about how much she hates Sheem. She does not like Sheem in any form and she is quite sure that Sheem cannot be used in making a great side! I was almost horrified reading the post! What about Sheemer Jhal or Sheem Bata or Sheem Paturi and chorchori prepared with Sheem. Have not she had those! What a miss! Then I thought why have I not written about any veg or lentil-based Jhal! Not that I don't make those at home! If hers was a miss; mine was irresponsibility!

On this note, I am going to share the recipe of Shorshe Sheem aka Sheemer Jhal.

Talking about Jhal without mentioning the typical Saturday Niramish lunches we used to have while growing up would be a crime. Here I must mention Mammam as well. At my north Calcutta residence, Jhal was a regular side. Our usual lunch spread was always having a few non-vegetarian dishes, as well as vegetarian dishes, and one or other kind of jhal, was always there. Saturday lunches were strictly vegetarian and on the rest of the days, a separate spread was prepared for Mammam (my late aunt and an amazing cook). She stopped having non-vegetarian food after my uncle's death. My uncle died before my birth and hence I never have seen mammam eating non-veg!

She was a great cook and several recipes of mine are directly from her kitchen. I follow several tips of her while cooking Bengali food. Mammam was a pro in making a different kind of Jhal. Along with the Macher Jhal for the rest of the family; one substitute was always there as part of our family lunch. Be it Sheemer Jhal, or Alur Jhal, or Alu Dantar Jhal and also Alu borir Jhal or Borar Jhal and actually several more.

I always liked the vegetarian Jhal along with rice. Mammam used to cook the Jhal herself and for me, it was way better than the jhal cooked by Mukti dada, our cook then.

The recipes for making different types of jhal are quite the same as most of the jhal are prepared with mustard paste. Tomato is a later addition, however, I think is a wise one. Tomato makes the Jhal tangier and complements the flavor of Mustard paste. Jhal calls for both mustard paste and also mustard oil. You can substitute mustard oil with other oils but it gives an amazing pungent flavor to the dish. Here I must mention, Sheemer Jhal is not only a vegetarian no onion no garlic delicacy but it is a vegan dish as well! 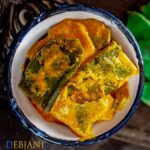 Bengali Sheemer Jhal is an easy side prepared with Sheem aka broad beans and mustard paste. 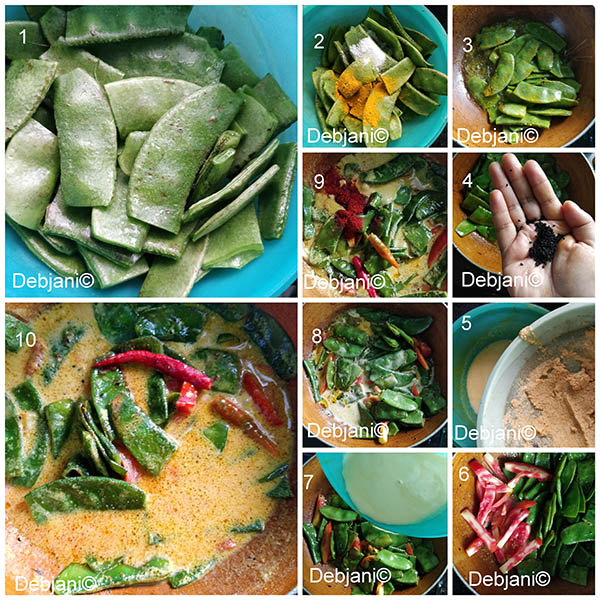