"Hey, look Mehebub over there! Machwala dada is having Dim Bhora Parshe Mach! Let's pick some. I will make Shorshe Bata diye Parshe Macher Jhal. It is been Long when we have had it with steamed rice." this was me to Mehebub upon seeing fresh Mullet aka Parshe mach at Patuli floating market a few days back. Mehebub did not oppose and that was not surprising. He, after all, loves fresh Parshe that too filled with Roe.

Pasta, on the other hand, cherishes Parshe mach as well, however, she is not allowed to eat Parshe mach on her own. I still am not confident about Pasta's capability of handling smaller fishes. Parshe is one such fish. She is allowed to have it whenever I am at home for lunch or dinner so that I can debone the fish for her to eat! For that matter, Pasta, in fact, loves freshwater small fishes. Here I must mention; she just like her Dimmi (my mother) loves Macher Jhal prepared with any fish! Macher Jhal basically is a gravy based fish dish where the gravy is prepared with Mustard paste. I cannot imagine my mother not having Jhal in any form (either with fish or veggies) at least twice a week!

Talking about the Jhal prepared with veggies, I just now have realized I have not written the recipes of Bori Alur Jhal, or Danta Alur Jhal or Borar Jhal so far! Needless to say, I am going to post the recipes soon here.

Coming back to the Shorshe Bata diye Parshe Macher Jhal; this is nothing but fresh mullet cooked with a paste of mustard seed. The recipe is quite easy and calls for very few ingredients apart from the fish. I prefer to make the mustard paste with a mixture of white and black mustard seeds. You can, however, use either type to make the paste. You can even use mustard powder also instead of the paste. Apart from that, Mustard oil is a must while making this dish. The pungency of Mustard oil makes this dish more flavorful. A few green chilies, tomato and nigella seed, and also salt are what you need to make Shorshe Parshe. 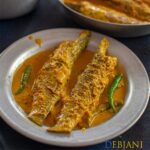 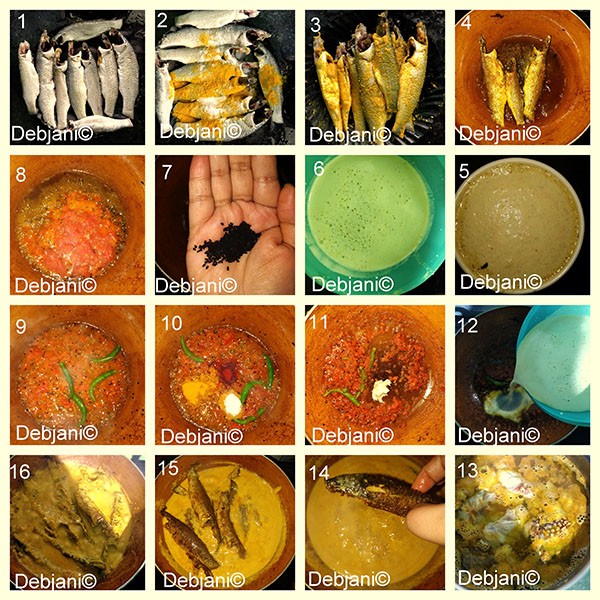 Here's the Parshe Macher Jhal Pin for your Pinterest Board!