How can Biye Barir Macher Kalia be humble! It cannot be; period. Though I refer "humble" every single dish I cook but not this one! This is not the simple whitish light Kalia but the rich and evaluated form of the same dish. Definitely, the richness speaks for itself and so does the name, Macher Kalia.

Here I must mention, we do cook a completely different version of Qalia (humble one, for that matter) known as Sada macher Qalia. I learned that recipe from my mother in law. According to her Sada Macher Qalia is a comfort dish prepared with choice of veggies and fish and is not the typical Red colored Macher Kalia. Sada Macher Qalia recipe is featured on Curries of India (a Living Foodz show) a few days back. It was almost similar to our Macher Jhol.

This probably is the beauty of the way we live and eat in India. A dish cooked differently in North-India and in the eastern part of the country. Even within Eastern India the "Hindu" type is the red curry while the Muslim version is having both the versions, light (sada macher kalia) and the rich one. I will for sure share the Sada Macher Kalia recipe here.

Kalia! what does it mean?

Though I don't know the meaning of Kalia, however, I know the difference between Kalia, jhol and jhal. According to the writer of the famous Bengali cookbook Amish o Niramish Ahar; Prajna Sundari Devi; Kalia calls for big chunks of veggies and is a curry. This can be both vegetarian and non-vegetarian. Also, she mentioned the importance of "Koshano" which is also known as "Bhunoing" (read frying). Basically, typical Bengali Kalia calls for shallow-frying the spices for long before making the curry. 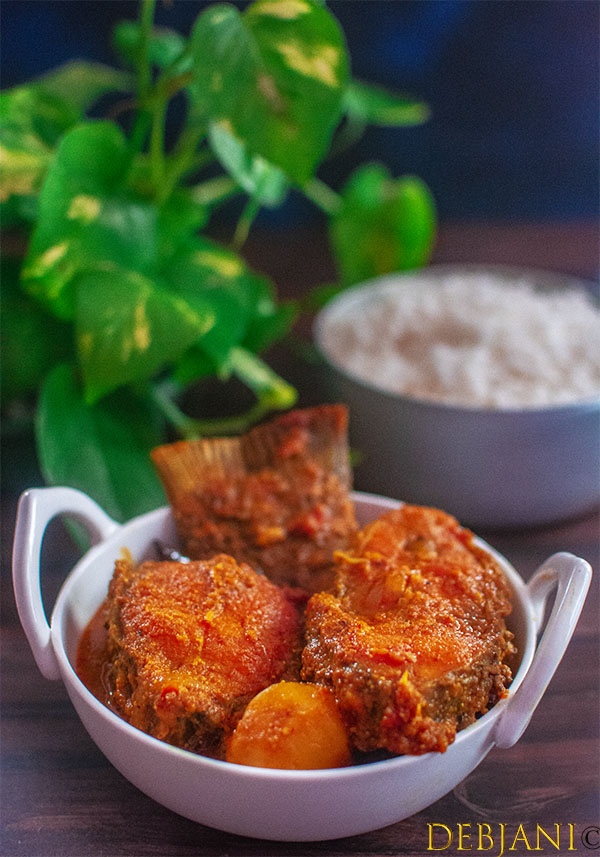 However, Bengali Kalia and North-Indian delicacy Qalia are not same. Basically, it is a rich gravy based dish. Bengali Kalia if cooked with Fish, also known as Macher Kalia is always paired with Potato or at times other vegetables. In fact, we do add potato while cooking mangsher kalia. Mangsher Kalia is nothing but meat Kalia however completely different from Meat Qalia i.e. available outside West Bengal and especially in North India. 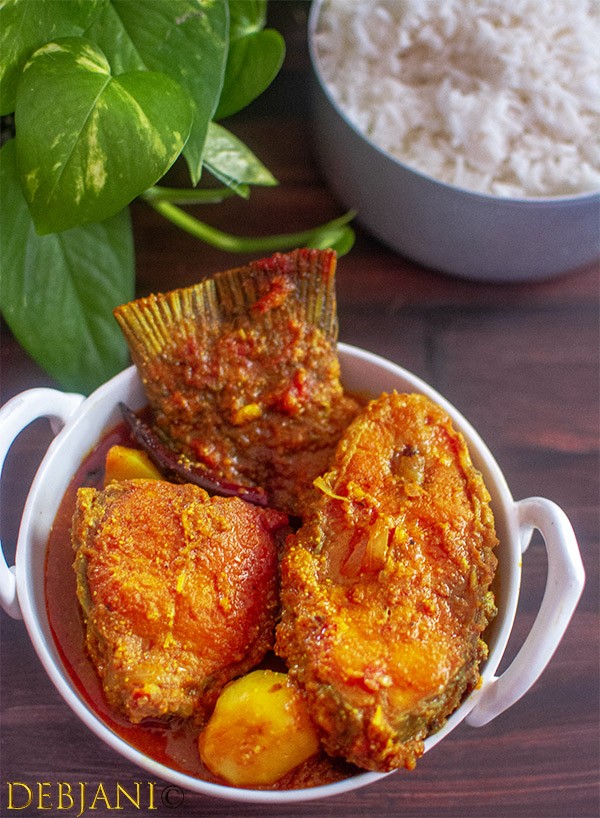 Needless to say, I am talking about a rich festive dish quite popular and is also cooked as part of the Bengali marriage spread. Growing up in North Calcutta I have had this curry several times during the marriages or other programmes. In my family, the lunch spread on the day of a particular occasion was mostly cooked by a Rannar Thakur. I am specifically talking about the lunch spread. He cooked for us for more than 40 years.

The Macher Kalia I am referring here is a rich gravy-based dish cooked with big fish chunks along with the potato chunks. Superbly aromatic and the silkiness of the gravy that "Pahari Kaka" used to cook was nothing but bliss. I have seen him cooking the Katla Macher Kalia several times. I actually noted down every single detail and till date I follow his recipe. The recipe never disappointed me. Kaka had a fascination for Katla mach and so do I.  I prefer Katla fish over Rohu. However, this dish can be prepared with other big fishes as well. 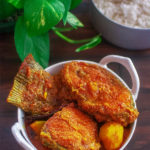 Macher Kalia is a famous curry based Bengali dish prepared with fish chunks and potato.

I have used Katla fish. You can, however, use Rohu or Bhetki.
Adjust chili powder as per taste.
Raisin gives a sweet taste to the dish. You can skip that if you wish.
The same is applicable to sugar as well.
You can increase or decrease both oil and ghee based on preference.

Have you tried the Macher Kalia Recipe from Debjanir Rannaghar!

I would love to see a picture of the same which you can share here on dolonchttrj@gmail.com. Meanwhile, on Instagram, you can use my hashtag #debjanirrannaghar and in addition, you can tag me at @foodofdebjani.