Unappealing look, prepared with the parts of the fish mostly people discard, Macher Teler Chorchori is the plain Jane of Bengali Cuisine for sure. Then you know, life is not only about to look and so is food. One of the underrated dishes, you need to savor Macher Teler Chorchori to understand the inner beauty (read the taste).  While clicking the bowl full of Macher Teler Chorchori, I was almost irritated given I was not able to click something appealing. Then it came to my mind, I don't need to, the dish even without the vibrant look is capable enough to share the story of taste.

Macher Tel stands for the combination of fish fat, fish liver, and the intestine. Well, the parts we discard generally aren't it but not the Bengalis though.  We not only make Maacher Tel er Chorchori which is basically a mishmash of fish-fat and potatoes and eggplant but some other dishes also. We at times, fry it and serve it with plain rice and make fritters (Macher Tel er Bora) as well.

They say it is good to have Macher tel to limit the triglyceride problem given the combination of fish fat, fish liver, and the intestine is Omega 3 fatty acid-rich. However, I am not a specialist and hence, this needs to be checked. 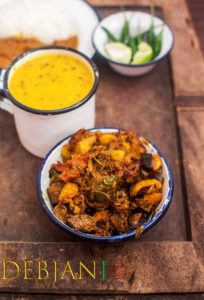 Probably the way I grew up in a joint family, till date I don't discard the Macher Tel either whenever I purchase whole fish. Throwing the food was never an option then and not even now. I prefer my portion of  Maacher Teler Chorchori with plain rice however, Mehebub likes it with Roti.

The recipe of  Macher Teler Chorchori calls for around 200g of fish fat, fish liver, and the intestine from any big fish. Here, I have used the parts of Bhetki Maach aka Local Barramundi. Though any fish can be used, however, Bhetki Maach makes the mishmash more flavorful, needless to say. Potato and Eggplant are the veggies I use apart from Onion, ginger, and garlic. In fact, these are the things I have seen my family using while making the fish fat, fish liver, and the  Macher Teler Chorchori and I follow the family heirloom recipe while making this. 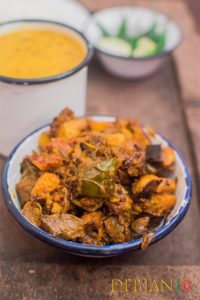 Here's how I cook Macher Teler Chorchori at Debjanir Rannaghar!

Macher Teler Chorchori aka Fish Fat, Fish liver and fish intestine mishmash with Potatoes and Eggplant is a Bengali delicacy.

I don't add any spices apart from Chili, turmeric, and salt. You may, however, add little Garam Masala while making the Macher Teler Chorchori. However, I feel the dish calls for domination by the fishy aroma, not the spices.

Have you tried the Macher Teler Chorchori Recipe from Debjanir Rannachar!

Do let me know how it came out. Also, I would love to see a picture of the same which you can share here on dolonchttrj@gmail.com. On Instagram you can use my hashtag #debjanirrannaghar or you, in addition, you can tag me at @foodofdebjani.