"Dada please pack one Mutton Tikia and two Rumali Roti. I want extra gravy too"; It was the regular order by the teenage girl I was fifteen years back. With the pocket money I used to receive, One Tikia, Two Roti followed by one Khirkodom or 100g Bonde were all I could afford for the evening snack that too once a week. Tikia had always been love, however, the gravy was lust! Palm-sized, rough outer-crust ( if I at all call it outer-crust); Tikia aka the Mutton Tikia was the School-time mate to me! I used to come back from the tuition classes with an earthen pot (bhnar) half-full with the Kebab like thing, dripping in Oil (or Vanaspati) along with a few Rumali Roti. Who have thought that there are people possess the same emotion for the meaty Tikia and especially for the gravy! Then there's Tanmay's Tweet 🙂 . In fact, his tweet was like a kick. It reminded the entire School and college time, the limited pocket money and the days of having the first few roti's with just the "Tikiar Jhol" (the gravy).

I asked him to translate it. Considering the typical Bhodrolok he is; I knew he will do that without being irritated. Not that I could not translate but the emotion is something that requires the special touch. Here's what the tweet meant in English:

During my college days, when spending each rupee implied a thorough ROI calculation, Saima's Mutton Tikia was the real deal. Would easily have minimum five Rumali Rotis to go with a plate of Tikia. 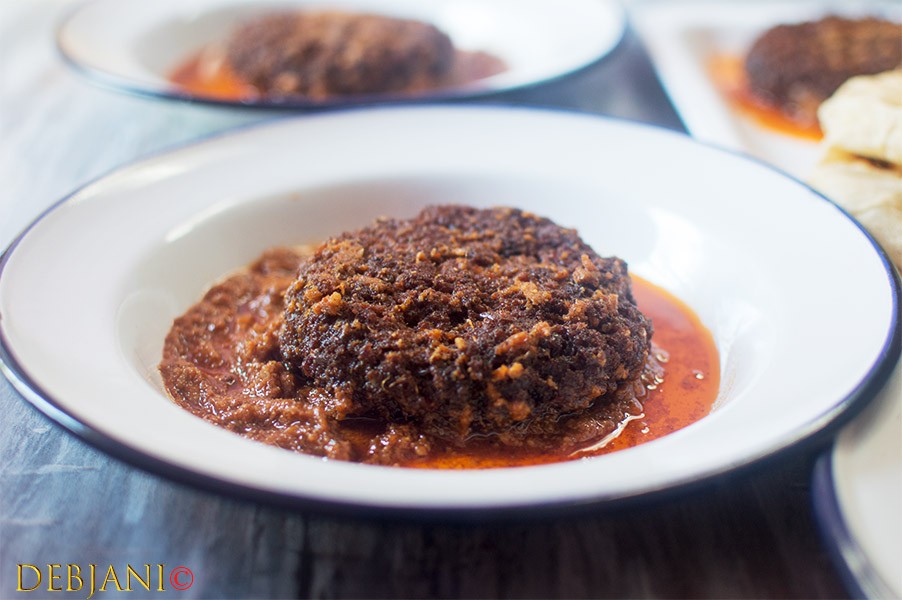 Coming to the favorites, mine is a small joint at the crossing of Surya Sen Street (Guest Snack Bar) which according to me sells Kolkata's best Mutton Tikia. You may differ though, after all, there are known joints like Saima or Zeeshan for selling Tikia. Mehebub for that matter differs and he is in favor of Saima's Tikia and so is my friend Tanmay.

Last night, I and Mehebub were discussing Tikia. Mehebub asked me to define Tikia given one who has not tasted it may confuse it with the sophisticated Shammi Kebab. 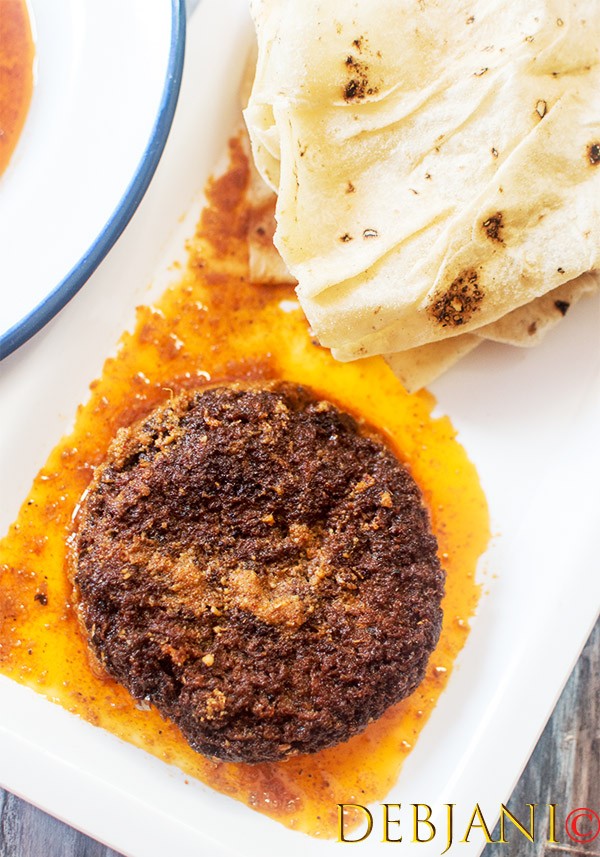 I was making the Tikia when the question came. I replied; "Tikia is like the Alpha male from the Mills and boon. Rough yet soft; it can kick your taste-bud yet it is subtle and soft. The gravy itself has a story to tell and that is different from the flattened meat disk. The rough outer layer will never show what lies within; the softness."

He almost chocked the vodka he was sipping! "Debjani don't tell me you still read those shits! Mills and Boon! Really!

"Hmm and I still love the Mutton Tikia and I still prefer to finish the thick gravy first with the roti and then I enjoy the soft Tikia. Don't judge husband! You must understand the difference between having sex and making love!"

"Woman for the sake of your readers, a normal definition if you please!" my man requested and I obliged ;)! 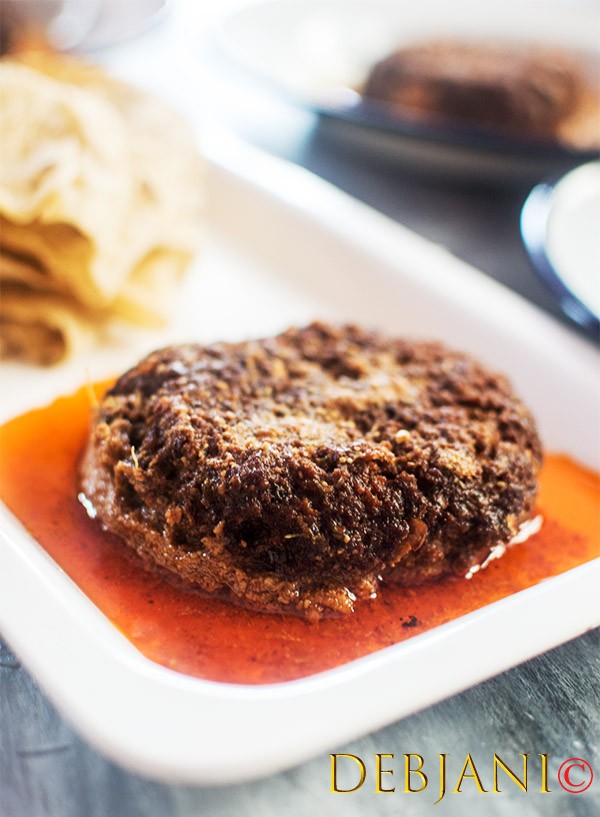 Flattened Meaty disk lightly very very lightly (mark the emphasis on "very) in a thick gravy is what Mutton Tikia for you. Not as sophisticated as Kebab, yet a known and signature meat delicacy from Kolkata. Almost a similar form is available in Bangladesh as well and they call it Tikia Kabab. Even the Murshidabadi Muslims are known for a similar dish. However, in both cases, they don't toss it in gravy and that makes Kolkata's Mutton Tikia different. The outer crust of Tikia is rough while the disk is super-soft as a whole. The meat inside is buttery soft and is subtly spiced and is characterized by the use of Chatu/ Sattu. 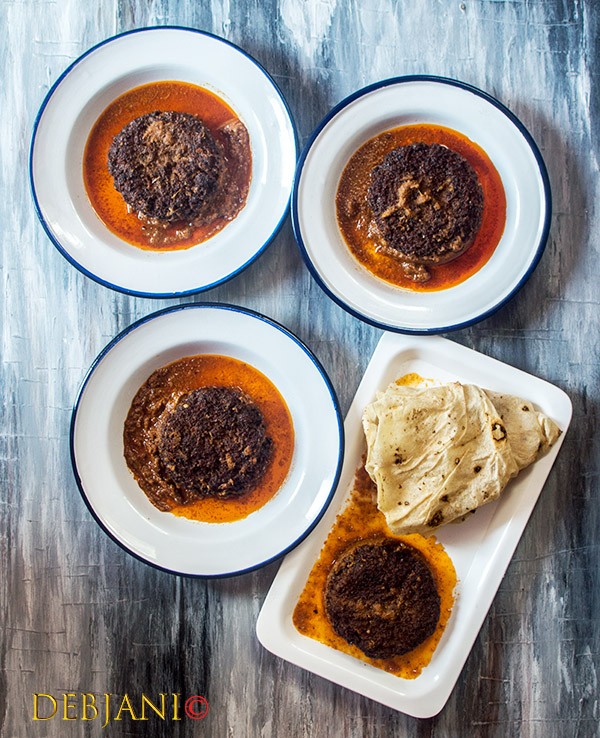 Coming to the recipe of Kolkata's Mutton Tikia, it calls for Mince Meat and Cholar Dal (Bengal Gram) along with Chatu (Bengal Gram Flour) along with a few spices. The gravy is a thick one and is prepared with a dash of Chatu again. Here's is how you make it and in case you don't want to Make Mutton Tikia at home, you can order it from the nearby locations through Swiggy.

Mutton Tikia is a famous meaty kebab from Kolkata comes with gravy.

To make the Gravy:

To Make the Gravy and finishing the dish:

Mawa is optional however makes the gravy rich.
The gravy calls for extra oil. You may reduce as per taste.
Instead of Chatu/ Sattu, Besan will not work! If not available make a coarse powder of Bengal gram, Pigeon Peas (Arhar Dal/ tur Dal) and chickpeas. Take all the lentils in equal quantity.
Use a flat pan While tossing the Tikia with the gravy.
The delicate Tikia calls for attention else you get the soft kebab intact and that is, believeme, very unfortunate!.

Have you tried the Kolkata's Mutton Tikia Recipe from Debjanir Rannachar or have similar memories!

Do let me know how it came out if you tried it at home. Also, I would love to see a picture of the same which you can share here on dolonchttrj@gmail.com. On Instagram you can use my hashtag #debjanirrannaghar or you, in addition, you can tag me at @foodofdebjani.

Here's the Gokul Pitha Recipe Pin for your Pinterest Board!