Mangsho cannot be niramish right? For sure, if you are a Bengali or you know the Bengali language, the term Niramish Mangsho is nothing but an oxymoron. After all, we call Enchor aka raw Jackfruit gach pantha, the vegetarian meat. Then why this name? Let us talk about the famous Kalipujor Bhoger Mangsho!

Well, in every dialect, there are a few phrases, which cannot be described by a word or a typical meaning. Niramish Mangsho is one such term. In Bengali cuisine, anything cooked without onion and garlic (and in few cases, without a few more ingredients) is termed Niramish. As this particular meat curry is cooked without onion and garlic, we often refer to it as Niramish.

While we cook bhog in Bengal, we do not add onion and garlic to it. We serve meat as well as fish to our goddesses (Devi Durga or Kali). This bhog is not cooked with onion and garlic. The meat we cook for bhog is called Bhoger Mangsho. You often see this Mangsho being prepared on Durgasthami or the day after Deepavali.

A Bengali delight, Bhoger Mangsho or Niramish Mangsho is indeed a special dish to me. Growing up in a North Kolkata house with 28 members, I am fortunate enough to witness different flavors of Bengali culture and rituals. Not that I adopted everything but yes I experienced everything and ended up making some set for me to follow. Kali puja has always been special to us and it has never been Diwali to celebrate in our part of the city during that time. I have seen my father fasting for the entire day (and night) of Kalipujo and I somehow felt spirited having seen him.  I also started doing the Kalipujo fast with Baba when I was a teenager.

On the other hand, my mother’s maiden side; to be precise my grandmother’s family is originally from a village of Jharkhand, known as Maluti. I used to visit that tiny village with Maa almost every year during Kalipujo. The place is nearby (well almost) to the famous pilgrimage of Tarapith. Maluti is famous for the temple of “Devi Molikha”.  Surrounded by the plateau of Chota Nagpur, Maluti indeed is a place to explore the eternal beauty of nature. However, apart from the natural beauty, I was attacked by the festival of Kalipuja there every year.

Direct to the recipe!

As the place is influenced by the tribal community and the Santhal tribe to be specific, the Kali puja is also influenced by the tribal flavor as well. Eight significant Pujas including the Royal puja of Devi Molikha and not to mention one out of the eight pujas totally followed the tribal processes. Believe me, witnessing the puja of Ma Kali (for me specifically the Santhal Puja) was something that spirited me a lot all through my starting years and even today.

In addition to the other rituals, sacrificing livestock which is known as “Boli” used to be quite common during Kalipujo. Maluti is no exception to this and in fact, this is what is famous in many places including Kalighat. Having specially prepared sacrificed meat is a ritual on the consecutive day of puja. Having said that, the “Pujor Mangsho” or the meat (mainly mutton or lamb) that is considered the “Prasad” is never been prepared using Onion and Garlic. In fact, that makes Bhoger Mangsho or Niramish Mangsho unique.

I have not visited Maluti for years thanks to my busy life. However, I cherished listening to my mother every year about her experience being there. I can’t even imagine Maa not visiting Maluti during Kalipujo. Coming back to the Niramish Mangsho, I have had the Niramish Mangsho in a different form. However, the main thing to remember is not to prepare it using Onion and Garlic. As Onion is not part of the dish, to give it a distinct flavor use of Asafoetida or “Hing” is a must while preparing the Niramish Mangsho or Bhoger Mangsho this is what I learned from my Dida.

We cook this dish with very basic spices. I personally don’t even use Tomato in it. I do cook the Niramish Mangsho every year on the day after Kalipujo! This is probably my way of looking back to my childhood and cherishing the special aroma of the runny mutton curry.

I am cooking this dish for years and I have cooked it for the masses.  I must mention, I have modified the recipe over a period of time, mainly a few processes. This is why the written recipe and the video recipe for Niramish mangsho are different.  Here I must mention, in some families, Curd is not added while cooking bhog. However, we use it for general cooking.

Now on this note let us have the recipe of Niramish Mangsho the way I prepare it. For me, my Niramish Mangsho is incomplete without Aloo (potato chunks) and also Ghee tempered spices in it. Not to mention, carefully chosen mutton with a little addition of fat (say 10%).

Reminiscence of Kalipujo at Maluti, a tribal village & recipe of Niramish Mangsho or Bhoger Mangsho 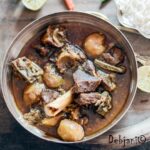 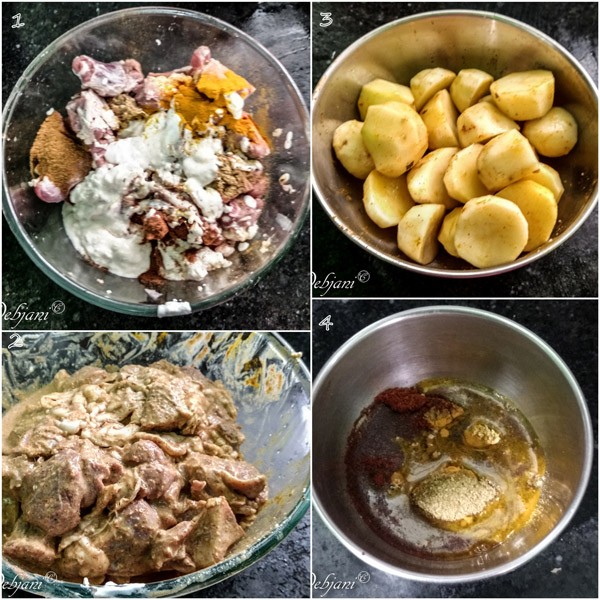 Here's the Perfect Niramish Mangsho Recipe Pin for your Pinterest Board!