"You don't know anything! Maa always refers to it as Kata Moshlar Mangsho, not Gota Moshlar Mangsho!" This was my worse half while managing the Marrowbone from Mangsho I cooked for his birthday.

The banter over the Bengali mutton curry was quite interesting however, I decided not to post the recipe then and there. I waited till Bhaiphota came up with the recipe. After all, Bhaiphota calls for some Meat curry; isn't it?

Birthdays are a homely affair at our abode apart from Pasta's birthday. It was Mehebub's birthday last week and like every year we celebrated but not elaborately. I cooked a few dishes at home for dinner and we had a peaceful brunch at Vintage Asia. Pasta decided not to accompany us for the brunch. Coming to the birthday dinner spread, I cooked Mehebub's favorite Gota Moshlar Mangsho along with Tinkona Porota followed by Crab Malaikari and Double Ka Meetha. Oh, I forgot to mention Chaler Payesh.

Cooked with the whole spices; this particular Bengali mutton curry has been quite regular at both the home; mine and mehebub's. However, both the family used different names for the same dish. In my place, it has always been known Gota Moshlar Mangsho. Whenever Mehebub had mutton or beef cooked with whole spices at home; he heard the name Kata Moshlar Mangsho.

From what I understand, it is nothing but the way we speak Bengali at home i.e. responsible for the different names. Bengali is a very versatile language and we speak it differently and with a different accents. The style and even the words we use vary from country to country (India and Bangladesh); state to state (West Bengal and Tripura); district to district ( Kolkata and other districts in West Bengal; each and every district in Bangladesh) and even area to area within a city (for example North Calcutta and South Calcutta). Coming back to my Mangsho; I found, the dish is known as Kata Moshlar Mangsho in Bangladesh too.

Before going further with the recipe; let me tell you this is not similar to Kosha Mangsho or Mangshor Jhol (also known as Bengali mutton curry). Gota Moshlar Mangsho is nothing but Meat cooked with whole spices. Here Gota Moshla stands for the whole spices and Mangsho is meat. You may, however, cook this with chicken or lamb, or beef as well. In fact, the recipe for Goalondo steamer curry is quite similar to this dish.

Amar Barir Mangsho; the homely mutton curry and tips from Bibhutibhushan Bandyopadhyay's Adorsho Hindu Hotel to get the perfect Mangsho!

It was quite regular at my home while growing up. One reason might be the fuss-free cooking process where you just need to marinate the meat chunks for hours followed by slow cooking. At my place, we never used a refrigerator while growing up as part of a joint family to store non vegetarian dishes or items:). The Fridge was meant to store water, milk, and a few vegetarian dishes. We could not store vegetables as veggies were always purchased in bulk for the 20+ membered family. Whichever meat curry called for marination time was meant for dinner. Baba or Jethu used to come back home with the "Bajarer Thole" (the shopping bag) full of Mangsho on Sunday morning which was then marinated with the required spices and kept in the kitchen. Maa or Mamoni or Rangama used to cook the meat in the evening for dinner.

Maa always referred Bibhutibhushan Bandyopadhyay's Adorsho Hindu Hotel while cooking Mangsho! This is a cult Bengali book and is all about the story of a  simple pice hotel and a hotelier. In one chapter, Bandyopadhyay talked about the process of bulk Mangsho cooking. Why not use cold water or water in room temperature while cooking Mangsho was the most useful information that I have gathered from a book which is not a cookbook! I thought to mention this book as part of my blog posts several times, however, was not able to do so. The Hindu hotel concept is superbly interesting and needless to say, is Bandyopadhyay's writing. A must-read for sure! 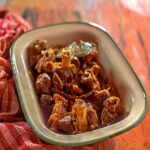 Gota Moshlar Mangsho is a Bengali meat curry where the meat (mostly mutton) is slow-cooked with whole spices for hours. 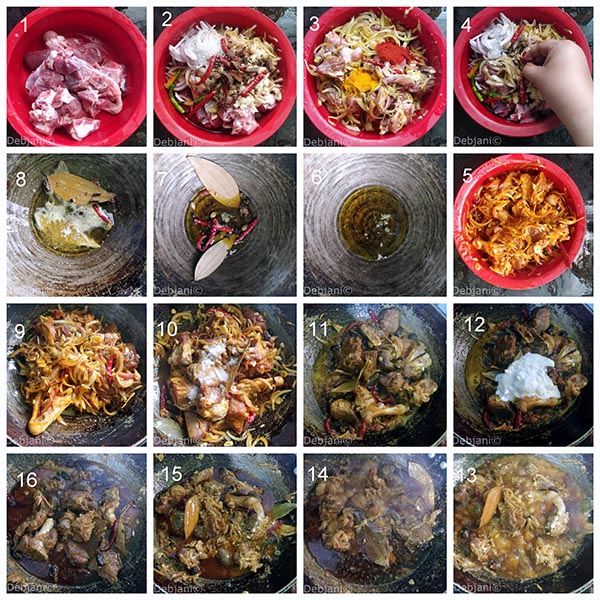