"Papa; Momma is making Chaler Payesh" I smiled listening to my five-year-old. She loves Chaler Payesh. Though at home we simply call this delicacy Payesh (without prefixing it with Rice or Chal). This was the day of Soptomi and I was cooking Payesh in bulk like every year. I was relaxed and cooking it with love and care. The dish after all calls for slow cooking.

Chaler Payesh and the name says it all if you are a Bengali. In fact, the emotion will be same if pronounced as Kheer or Payasam or Kiru or Payox or even Dudhpak or Rice Pudding.  A simple sweet delicacy prepared with Rice and Milk needs no introduction actually.

Here in this post, I am mainly talking about the dessert prepared with Rice and Milk but not other forms of Kheer. In fact, I am mainly talking about the Bengali version of this particular dish; Chaler Payesh. Being said that, we cook payesh with other ingredients along with milk as well such as Suji (Semolina), Seviyan or Semui (Vermicelli) and also vegetables and fruits. However, Chaler Payesh seems the mother of all the Payesh.

Coming to the origin of Chaler Payesh, the name Payesh derived from Sanskrit word Payasam which means Milk. If we go by the definition provided by Oxford dictionary "An Indian dessert consisting of rice or (in later use) vermicelli, boiled in milk or coconut milk, flavoured with cardamom, and often containing groundnuts."

In India, rice is our main staple and has its route way back even before European countries. Rice Kheer is being mentioned by the Ayurveda as well. The combination of Rice and Milk is nothing but good. This dish is part of "Bhog" at different temples for more than 1000 or more years. In fact, the use of spices (such as Bay leaf, cardamom) etc makes it different and unique if compared to the Rice Pudding. The auspicious occasions in India such as Annaprashana, Kheet Chatai or Akika are incomplete without Kheer or Payesh.

What else but Jonmodin (Birthday). The humble the event/ party was but Payesh was mandatory and it is till date. This, in fact, is quite common in Bengali households. Our birthdays are incomplete without Maa-made Payesh. My mother, needless to say, makes amazing Payesh. However, it was Mammam (my late aunt) who intrigued me with her Payesh making skills. I still remember her seating in the floor and cooking Payesh over "Matir Unun" (Traditional earthen stove). It used to take her long to complete the gourmet offering. In our house, it was first served to Thakur (Deities).

Her Payesh making tricks were unique and probably the best to my knowledge. According to her, Chaler Payesh must not look pale white! It should have a pinkish-white color. She actually was right now I realize! The milk if cooked for hours must not look white and that makes it special. Mammam used to use Batasha (eggless Maringue!) and Michiri/ Misri (Sugar Candy) instead of Sugar for added taste. Last but not the least she had a thing for not garnishing Payesh with uncooked raisin and nuts. Mammam used to say the more you slow cook the more is the chance of getting rich Payesh! You may wonder how it is possible to cook the Payesh for an hour (s) when the milk portion is constant! To know the trick you need to read the recipe 🙂 .

Here I must mention; I though have noticed people cooking Payesh and as they say, I cook it quite well, I don't love Payesh much! Yes, you read it right 🙂 unless it is Gurer Payesh (prepared with Jaggery). I have already mentioned, I do follow my Jethima's process while cooking Chaler Payesh, however, I do use Condensed Milk for added flavor and richness.

Chaler Payesh is a signature Bengali slow-cooked dessert prepared with Rice, Milk, and also Sugar or other sweetening agents. 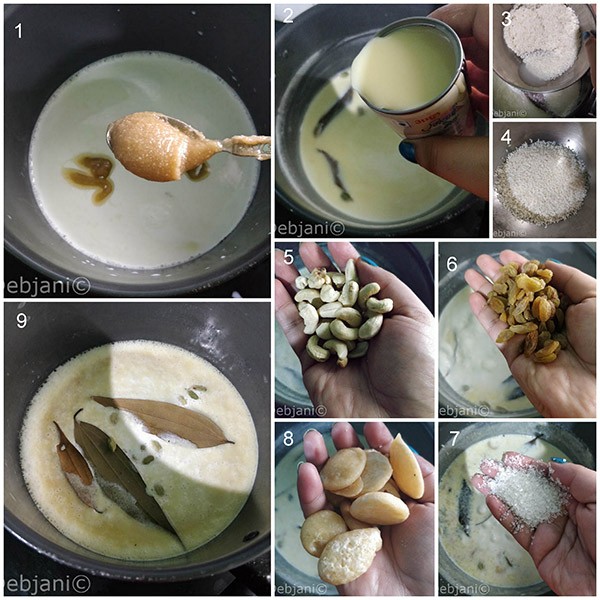 Ghee is optional however highly recommended as it makes the Payesh rich. Also, Ghee helps in preventing burning of the milk.
As I have used condensed milk which is sweet itself, I have reduced Sugar content. If you are not using it increase sugar based on requirement.
Batasha if not available can be replaced with a similar quantity of Sugar.
Water is the trick in this recipe. The more you boil the milk, the more is the taste. Water is added to increase the cooking time and it increases the flavor as well.