Narkel Chapa aka Narkel Sondesh needs no further introduction if you are a Bangali or connected to Bengali food culture in any manner. However, if you are not any of those, let me tell you this quincuncial Bengali Coconut Sondesh is something the people of Bengal must have tried once. Not that you cannot make this all through the year but having Narkol Tokti after "Bijoyar pronam" has its own charm.

After the hustle-bustle of Pujo we used to visit Dida mandatorily with a box of Misti from Bhim Chandra Nag on Ekadashi. Baba always had the preference for Dilkhosh sondesh over Roshogolla. However, this post is not about delkhosh (typical Ghoti pronunciation) sondesh but Narkel Tokti. Upon reaching Howrah'r bari, my first destination was Dida's kitchen. By then Choto Aloor Dum was also ready, and so was Niramish Ghugni. However, Dida used to wait for me as I loved to watch her making Narkol Chapa using the age-old mold. Without almost noticing the Bhaja Moshlar Gondho, I used to seat with her to see the making of Narkoler Sondesh.

Her process was detailed without missing a single step and needless to say the end result was heavenly. She would use a Bonti with scrapper (coconut scrapper) to grate the coconut. After that, she would use the Shil nora (Mortar and Pestle) to make a finer paste of the coconut. She used to say, "you must make a smooth paste of coconut, and then only you would get ideal Narkel Chapa!" Edible Camphor (Korpur) was a must-used ingredient. I personally feel it is camphor that makes all the difference. It adds another layer of flavor to this delicacy.

I never returned home without a Horlicks's Shishi full of Narkel Naru and Narkel Chapa. Then there was Narkel Chire, a delicacy I still try to avoid making. Maybe sometimes in the future, I would make the chire almost like her. Intrecate it was and one of the toughest Bengali desserts to make according to me. However, I make Narkol Naru and Narkol Chapa every year following Dida's recipes. She is no more with us and I still miss that perfect little lady who had an affection for Rumal (handkerchief) scented with Charlie Scent (perfume).

What exactly is Narkel Chapa

Narkel Chapa is a dessert prepared with coconut. It is a Bengali Sondesh which we make using coconut paste, preferably sugar (or jaggery) and a dash of camphor along with Khowa aka dried and reduced milk. Chapa stands for "pressed". A traditional earthen or wooden mold is used to give an impression on the top of the shondesh and hence, the name. 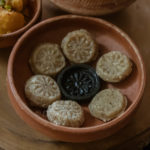 Narkel Chapa is a Bengali dessert prepared with coconut. We make it using coconut paste, sugar, and a dash of camphor along with Khowa.

Have you tried the Bengali Narkel Tokti aka Sondesh recipe from Debjanir Rannaghar!

Here's the Narkol Chapa Recipe Pin for your Pinterest Board!