Nalli Nihari is something that I cook every winter and yet I haven't written the recipe over the years. One of the main reasons was the pictures. I wasn't able to click the pictures over the years or whatever I captured I wasn't happy with those. I have eight sets of Nihari pictures available from 2017, 2018, and also from 2019. Even this year I captured the beauty of Nihari two times and I finally was satisfied with one set of pictures. It was weird that somehow, I wasn't able to capture the beauty of the winter special over the years. Now that I have the pictures, I think this is the right time to write down the recipe.

Nihari is a slow-cooked and flavored stew cooked with shank meat and marrow bones. Beef, Lamb, Mutton, and even chicken are widely used in making Nalli Nihari. Shank is mainly round thigh meat. The muscles of the upper thigh of the animals due to their bone structure are tough and dry and also full of marrow. This particular type of bone is the source of gelatin. Gelatin is a degraded form of collagen and hours of cooking release the collagen into the stew.

The Mughals introduced Nalli Nihari to the Indian subcontinent. Initially, Mutton Nihari was favored by the noble lot, however, over the years other types of meats such as beef, buff, etc. were introduced. In Pakistan, Nihari is mostly cooked with beef. These days, Chicken Nihari is equally popular. In India, you can see different versions of Nihari cooked with Beef, Mutton, or Chicken. Nihari even is available in the villages during the winter. I have had hearty Nihari in Birbhum during the winter from the streetside shops.

Traditionally Nihari is cooked with Ghee, a special mixture of spices, and obviously shank meat for around 8 hours. These days to cut calories people use oil instead of ghee or use a mixture of both. I prefer to use a mixture of both instead of skipping ghee completely. Ghee is having several medicinal properties and, in the winter, there is no harm in adding little ghee while cooking Nihari.

Though not 8 hours but I cook the meat for at least 6-7 hours. I start cooking it at 4 a.m. and finish cooking by 11 a.m. Nihari is derived from the Arabic word Naahar which stands for the morning. It is said that the Nawabs used to eat it as part of breakfast after the Fajr. I am not a religious person yet I prefer cooking it in the early morning. I somehow feel the early morning helps in making the Nihari subtle!

Homemade Nihari Masala- a must for this recipe

Talking about the process, I in general, do not add onion while cooking Nalli Nihari. I make the spice mix at home instead of purchasing the readymade Nihari Masala. Not that the store-bought spices are bad, however, I prefer certain blends and making the mix at home gives me that flexibility. In this post, I am sharing the recipe for Mutton Nihari as that is what I cook at home most.

We prefer eating beef Nihari from Sufia located at Zakaria Street and don't in general cook it at home. Chicken Nihari is not something I am very fond of. the dish after all calls for hours of cooking and that's what we can't do with chicken in general! However, for the sake of the readers, I will share the recipe soon. Some people add brain and chunks of mutton fat while cooking Nihari apart from the Marrowbone and I am one of those. I prefer to use a heavy-duty vessel with a lid to cook Nalli Nihari.

Here I am sharing the detailed process and the pictures of each step for slow-cooked Nalli Nihari. Hope these will help you to understand better the process of cooking Nihari at home.

Make the Nihari Masala by combining all the ingredients mentioned in the recipe card. You can store the nihari masala for future use as well.

A mixture of Shank pieces of mutton, lamb brain, and fat is a must for making perfect nalli nihari at home. See the recipe card for measurements.

Marinate the mutton chunks with salt, ginger and garlic, and nihari masala. See the recipe card for the process of making Nihari masala and for the measurements as well.

Fry the mutton chunks in a mixture of ghee and oil till it changes color. Check the recipe card for measurements as well as for the time needed.

Cook the mutton till it releases sufficient moisture

You need to add boiling water and slow-cook the mutton for hours to cook the perfect mutton nihari. See the recipe card for details.

Add Slurry (check the recipe card for the slurry-making process) to make the gravy rich for Nalli Nihari.

When the Nihari is almost ready add the remaining Nihari Masala.

Top it with the oil separated in the earlier step, onion crisps, lemon juice, and julienned ginger while serving

You can see the texture of the Mutton Nihari. I cooked it for 6 hours. Check the recipe card for minute details.

A large Vessel with a proper lid is a must while you are cooking Nihari at home. I prefer using a heavy duty one. 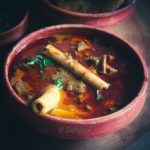 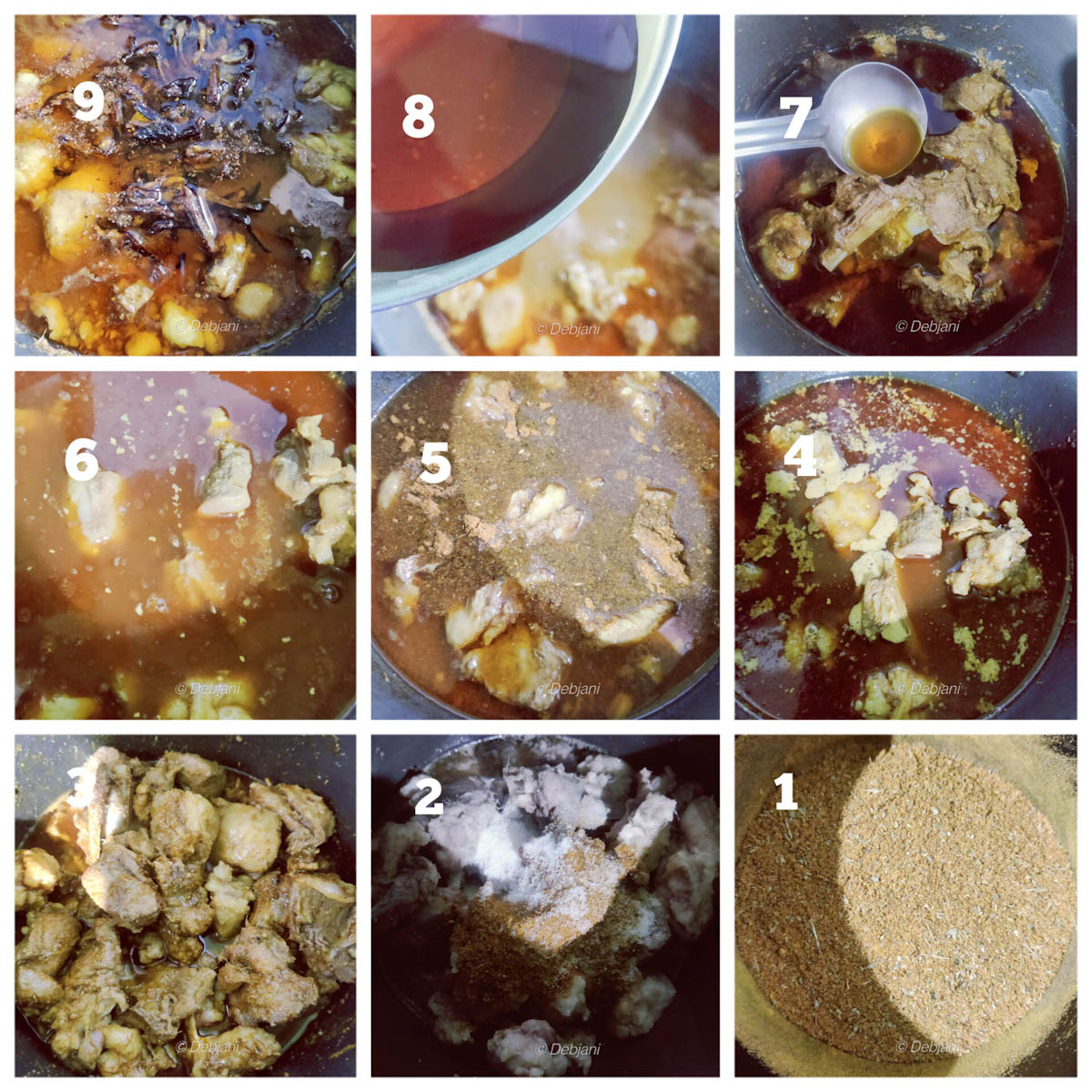 Have you tried the Gosht Nihari recipe from Debjanir Rannaghar!

Here's the Mutton Nihari Pin for your Pinterest Board!