Shahi Paneer Korma a.k.a Safed Paneer is prepared with Poppy Seed and Cashew Nut paste and I found it closer to Bengali Mughlai food. Use of these two ingredients along with Curd is quite common both in West Bengal and Bangladesh especially in the Bong style Mughlai food.  Moreover, a pinch of Sugar is the heart of this dish which is again a characteristic of Bengali food. My Chordibhai often prepares it and called it Bengali Paneer Korma a.k.a Bengali Paneer er Tarkari! 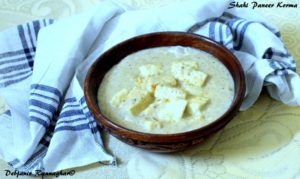 Coming to my recipe, it is a mix and match of Tarla Dalal’s Paneer in White Gravy, and Sanjeev Kapur’s White Gravy with a predominant Bengali touch of mine! I make Paneer mostly on the Saturday’s since we are Saturday vegetarians 😛 . My little one loves this mild Paneer dish a lot with her portion of ½ Roti or Bengali Triangular Paratha! 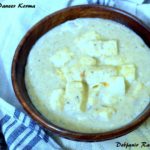 A Little preparation before Cooking!

Shahi Paneer Korma a.k.a Mughlai Paneer Korma can be served with Roti, Paratha and even with Pulao, however, I prefer to serve it with Triangular Paratha. 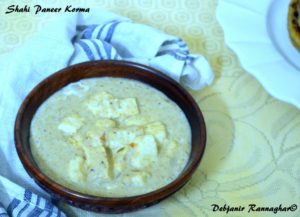