Living in a city for years and then leaving the city suddenly is weird, ain't it? This is exactly what happened to us presently. Hubby recently has opted for an overseas assignment and I and Pasta am shifting to Kolkata now. We just have decided to celebrate our Sunday with some bong delicacy before leaving our small apartment! I ended up making some Bhetki Macher Paturi which is a family favorite.

We visited C R Park last Saturday to pick some fish as we do at least once a month. However, our Saturday visit was a bit special this time. It was our last visit there before shifting our base to Kolkata next week. I love to purchase fish from C R Park market though Mehebub feels things are much more expensive there and he is right! A single Kola Pata (banana leaf) costs us 50 bucks! Along with Bhetki, I took some Kajori Maach which is a bit rare fish these days! I made Bhetki  Macher Paturi which is a family favorite.

Coming to my Bhetki Macher Paturi; this is one of my favorite fish preparation. Fish Paturi is a signature Bengali fish dish where Bhetki Maach along with a paste of Mustard and Coconut wrapped in banana leaf. It is then steamed on a slow flame and the end result is melting in mouth Bhetki Macher Paturi.

The recipe for this quintessential Bengali dish varies very little in different Bong families. However, there are a few tricks that I learned from the Rannar Thakur (traditional Bengali professional cook) who prepared this dish during our Housewarming party in Kolkata. He told me that 2 stage marination played an important role in making makhoner moto norom (as soft as butter) Bhetki Macher Paturi! Level one is to marinate fish chunks with lemon juice and salt for 1 hour. I modified normal lemon juice with Gondhoraj Lebu (lime) for a prominent taste. Level two is to marinate the fish chunks with the paste of Mustard-Coconut and some spices for around 6 hours or preferably overnight.

Paturi, the Process, and variations!

This dish can be prepared either in a flat pan. Else a Microwave oven can also be used to cook it, however, I prefer to use a pan to slow cook Paturi. Though commonly Banana leaf is used to wrap fish chunks for making Paturi.  However, Gourd leaves or Lau Pata also give an amazing result. If Paturi is prepared using Gourd leaves then those leaves or Saag is also eaten along with the fish chunk. I took some Gourd leaves yesterday from Market and wrapped half of the fish in Banana Leaves and the rest in guard leaves. Surprisingly, the taste was different in two variations of Paturi!

Here's how I make Bhetki Macher Paturi at Debjanir Rannaghar! 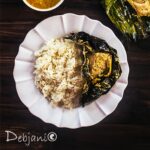 Bhetki Macher Paturi is a signature Bengali fish delicacy. In this recipe, Indian Barramundi (Bhetki Mach) is marinated with selected spices and then wrapped in leaves, and steamed to perfection. Then? Well.. you need rice to savor the fish! That's all! 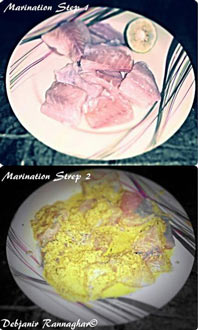 Making of the Fish Parcel or Macher Paturi: 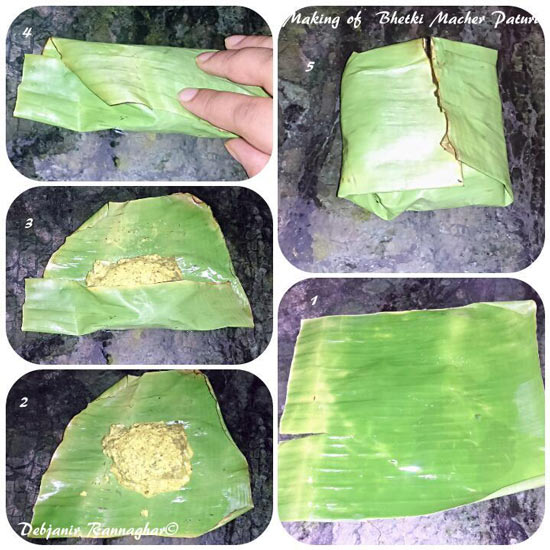 Have you tried the Bengali Bhetki Paturi recipe from Debjanir Rannaghar!

Here's the Bhetki Macher Paturi Pin for your Pinterest Board!