"May you please cut a few potatoes I also need a few Piajkoli. Please pick from the flower vase and cut it into long strips and Rosie defrost a few Tangra Mach too!" I disconnected the call after letting my house help know what I needed to cook Piajkoli ar Aloo diye Tangra Macher Jhol.

Life of a working mom who is a food writer!

Rosie did not ask what spices I need as she is well aware of how I cook Piajkoli ar Aloo diye Tangra Macher Jhol. I use a few fresh Garlic pods, some green chilies, and a mandatory tempering of Kalojire to make this dish. Last but not least, if available I use some coriander leaves too. In short, this is basically a very simple and comforting light fish curry I am talking about.

She knew it when I called I was driving the car and was returning from the office. This was another reason she talked little. She never approves of me using the phone while driving in Kolkata traffic though she is aware that I use a Bluetooth speaker. One thing I must say, this girl who works as a nanny for Pasta and also my right hand at home is nothing but a family member.

Talking about the ride, I was not in a good mood that day while returning from work. Mostly I and Mehebub travel together, however, he had some other work to finish after the office, and hence I was returning alone.

My family members know my bad mood is actually a bad thing to deal with and Rosie probably sensed that. It was a demanding day at work and I was for some reason feeling blue!

Upon returning home I found Pasta was doing her homework while sipping the hot chocolate. Rosie was sitting with her. In fact, I did not talk much to Pasta. I just hugged her and had a small cup full of Hot Chocolate. Then I changed and switch on the geyser and entered the kitchen. There I found every single thing I needed to cook Piajkoli ar Aloo diye Tangra Macher Jhol was ready. The fishes were fresh and from freshwater which we picked from the Patuli Footing market a day before only.

I started rubbing salt and turmeric powder into the cleaned whole fish and started heating the mustard oil. The pungent aroma of Mustard oil was enough to relax my mind. Then I started frying the fish followed by the Potato wedges along with a little salt and turmeric powder. Then there was the fresh Piajkoli. By the way, Piajkoli is nothing but Onion Stalks; a seasonal veggie available mostly in the winter.

Once I was done with the frying part, I tempered the oil with Kalojire/ Kalonji. I have added some garlic and tomatoes. Within 15 minutes or so I have completed cooking the Piajkoli ar Aloo diye Tangra Macher Jhol. By the time I finished the dish, I was smiling. I took a hot shower and told Pasta to close her copy. We both decided to listen to some light music after switching the light off. Mehebub returned at around 10 p.m. and Rosie by then made some steamed rice for dinner.

Dinner, needless to say, was comforting with piping hot Rice and Piajkoli ar Aloo diye Tangra Macher Jhol and loads of discussion about our future travel plan. Pasta was tired by then and decided to go to bed while I and Mehebub decided to talk about our respective days. Rosie, on the other hand, started making arrangements for the next day; Pasta's school; our offices, and so on!

The regular days at my place are like this only. Comforting, yet simple! Now that I am done with all the story-telling; I must share the recipe for the dish I was talking about. A seasonal delicacy, a light fish curry prepared with Tangra Mach (whole catfish); Piajkoli (Onion stalks); Aloo (Potato) and tempered with Kalojire Piajkoli ar Aloo diye Tangra Macher Jhol is easy to make and bliss when served with Gorom Bhat.

By the way, in the first paragraph, I mentioned that I told Rosie to pick Onion Stalks from Flower Vase. The reason being I use a Flower vase with little water to keep the Piajkoli. This is to keep those fresh and also to use as a decorative piece in my little kitchen which you know as Debjanir Rannaghar. 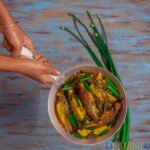 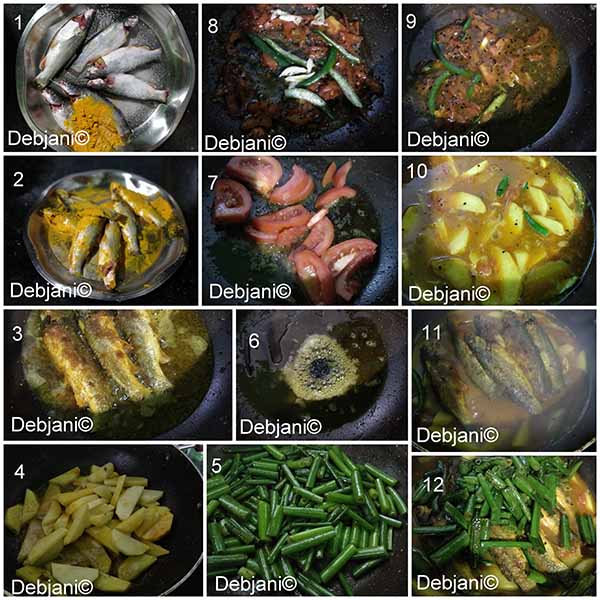