I overheard Maa and Jethima (Aunt) talking about Gota Sheddho last week when I was at my Kolkata residence! I was sipping my morning cup of coffee and enjoying their chitchat. A dish I have grown up eating with that too once a year! Have you heard about this Bengali thick Veggie and Lentil Soup before? This is a must-have at my place and I have seen my mother and aunts cooking it every year on the night of Saraswati Puja.

I left Kolkata in 2009 and shifted to Bihar and then again I shifted to Delhi after my marriage.  I was not been there in Kolkata for Saraswati Pooja to date. To be very frank I have not tried my hands all these years with this particular delicacy.

The Story of Gota Sheddho

"You should spread love and share Gota Seddho", Yes, that’s what I remember about this dull, brownish, Lentil Veggie Cold Soup, Gota Sheddho. So very simple and cooked with almost no spices however it tastes amazing at least to my taste bud!  This dish is always special to me for the simplicity that it has. For me, it’s an exceptional Bengali dish with the use of almost “No Spices”.  This, however, is not a typical character of Bengali Cuisine.

Gota means “Whole” while Sheddho depicts “Boiled”. Traditionally this dish is prepared with  Six types of Veggies (Potato, Sweet Potato, Baby Eggplant, Peas with the pod, Hyacinth Beans and Baby Spinach) and each of the veggies has to be used in a quantity of six along with   Green Moong Dal. Some people use Black Urad Dal instead of the Green Moong Dal, however, the latter is considered non-vegetarian by several families and hence they opted for the former one.

Gota Shiddho is a Traditional Bengali thick Soup prepared in the winter or specifically on the night of Saraswati Puja or Basant Panchami and after giving whole night's rest the dish is served on the next day which is known as Shitol (cold) Shashthi (6th Day).

Bengali Mothers worship the Goddess of Fertility “Ma Shashthi” on the day of Shitol Shashthi to protect their offspring from any harm that may arise! They don't opt for anything hot on the day of Shitol Shoshti and that is the reason the cooking is done on the previous day along with some more Bengali delicacies. Conventionally Shitol Shashthi is the day of giving a break to the “Shil Nora” or the “Shil Batta” the traditional Indian Grinder hence Shil Nora is also worshiped on the same day that is why Bongs eat food prepared last night on that day. Another tradition is to share the food; especially the bowl full of Gota Sheddho amongst the nearby family members, friends, and even neighbors.

It is believed that Gota Sheddho is a Pox preventive food (especially for Smallpox). I don’t know how far it is true. Even I am not sure what doctors say about this myth however, this is what aged Bengalis believe! To me, this is the epitome of Comfort Food. 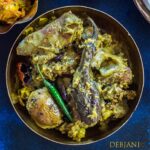 Gota Sheddho is a Traditional Bengali thick Lentil Soup prepared with lots of Veggies in the winter or specifically on the night of Saraswati Puja. 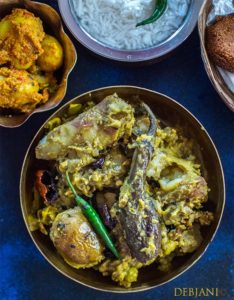 Heat 1 Tbsp. of Mustard Oil in a Wok and temper the oil with Dry Red Chili and salt. Add this to Gota Sheddho. this step is optional.

On the Next day serve Gota Sheddho as it.  Sprinkle Salt and drizzle a drops  Mustard oil as well. Add chopped Green chilies and a piece of Lemon to make it more flavorful. Serve it cold with plain rice (preferably prepared last night known as Panta Bhat).

Apart from Gota Shiddho below dishes are parts of the platter:

Gota Shiddho Recipe Pin for You