Jump to Recipe·Print Recipe
Maa can I have the rice with only Begun Borir Ambol? I don't want anything else but the Ambol!"
"No way! You have tonsillitis! I will not allow you to have the Ambol. It is cooked with Tamarind!"
Looking back, I realize Maa never allowed me to have Ambol without a fight! While Ambol was a regular occurrence at home. Mammam never had Non-veg after Mejo Jethu's death and hence, an elaborate vegetarian spread cooked without onion and garlic was regular at home.  Bori Beguner Ambol has been popular amongst others. She had a preference for Ambole over Chutney and I personally do like Ambol as well.

Ambol has never been part of a celebratory menu at home, instead, it has been cooked whenever there's a need for a big fat dose of comfort! The veggies, the body, the earthy flavor of jaggery and most importantly the runny soup makes is soul food. 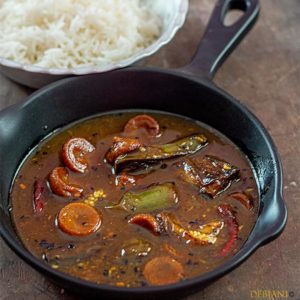 Ambol is a type of runny condiment cooked with vegetables with no added animal protein or portion. Sambol, on the other hand, is a non-vegetarian condiment. Ambol stands for Amlo which means acidic.
At my place, it was mostly Ambol as it was difficult to make a vegetarian and a non-vegetarian version of the same dish at times. 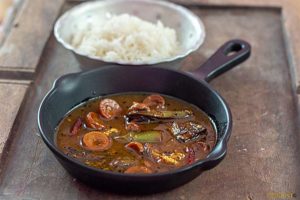 I do not remember having Begun Borir Tok at home. Ours was the Panch Phoron tempered, runny sour curry cooked with rectangular Eggplant and Biulir Dal er Bori. Gur aka Jaggery was a must. Bori  Beguner Tok is a regular at Mehebub's place where my Maa-in-law cooks cubed eggplant with less amount of Bori and do not use Panch Phoron as tempering. Taste-wise both are good and different as well! Nah, I never had a chutney cooked with Bori or Begun. 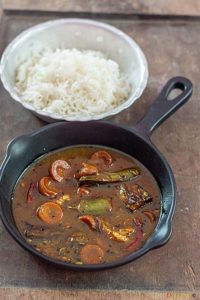 Both Bori and Begun were readily available and so was Jaggery. This probably the reason the Ambol was a regular occurrence at home. At times, when Bori or Begun was not available we used to had Postor Ambol. I will share that recipe as well. 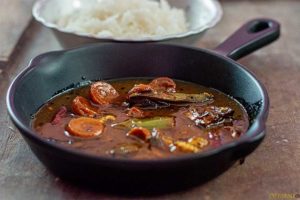 Though Maa used to fight with me over the ambol however, till date I have a fetish for Ambol. These days, after a tiring day at the office, I prefer a spoonful of rice with humble ambol and nothing else. I follow the family recipe without a single change. The Ambol I cook is runny, tangy; flavored with panch phoron, with a few chunks of fried bori and fried rectangular begun as well. Whenever I cook this; I keep a few chunks of fried aubergine separate for Pasta. Little one, after all, loves Begun Bhaja! 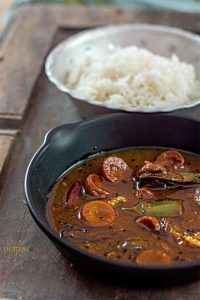 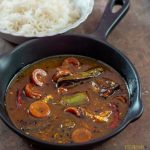 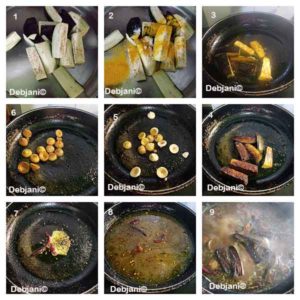 You can substitute Jaggery with Sugar.
You may get Bori in any Bengali shot if you are not in Bengal. Else you can make it at home

Here's the Begun Bori er Ambol Recipe Pin for your Pinterest Board! 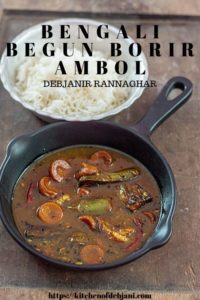