How can I not post the recipe of the Nepali Aloo Dum when around 12 people asked for the same the day before yesterday? A spicy, tangy Potato side Nepali dum Aloo or Darjeeling style Aloo Dum is pure bliss. This happened when I posted a picture of our Christmas family lunch. The Nepali Aloo Dom was part of the deshi lunch I made. The platter was having Bengali Ghee Bhat,  Roti, Deshi Murgir Dum, Nepali Aloo Dum, Tomato Aamsotto Khejur Chutney, and Gajar Ka Halwa.

By the way, I learned the recipe from Doma Wang, a friend who runs The Blue Poppy, a Kolkata-based popular Tibetian, and Chinese casual dining. Doma Di is from the hills and hence has amazing knowledge about the food from the hilly areas including Nepal.

I first had this simple potato delicacy in Darjeeling. In fact, the Dum aloo actually is an easily available dish in that part of the country. The recipe actually hailed from Nepal, the neighboring country. I was planning to make it at home for a long and was searching for the recipe too. I found a few recipes while searching the net, however, was not sure which one to go with. Finally, I contacted Doma Di. "Doma Di can you please share the recipe for Nepali Alu Dum"; I wrote without a second thought to Doma Wang a few days back.

I somehow knew that she is going to help me and exactly the same happened. She shared the recipe gladly. Spicy, flavored with garlic, reddish color, and tempered with Panch Phoron, this is what Nepali Dum Aloo is to me. The rustic flavors, in fact completely different from other forms of Dum Aloo, makes Nepali Aloo Dum special for sure. The recipe she shared is a simple potato preparation dominated by the flavor of garlic and almost no spices apart from Chili; this aloo Dum is completely different from the Bengali version of the same dish. Following her recipe, I cooked the Nepali Aloo Dum around 3 times though posted it for the first time on Christmas.

The recipe I am sharing is almost similar to whatever I learned from Doma di with very little modification. For Example, I have used baby potatoes; and two types of chilies while her recipe was with normal potatoes and one type of chili.

How do you like your portion of Aloo Dum; is it the North Indian Dum Aloo or Bengali vegetarian version of the same or the Bengali Aloor Dum with chorbi (Mutton fat) or the simple Nepali Alu Dum? Oh, how can I forget the Kashmiri Aloo Dum! Well, I love my portion of Aloo (and Aloor Dum) and I cook it quite often at home. 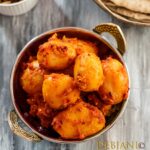 A very easy recipe for Nepali Dum Aloo or Darjeeling style Dum Aloo; a potato-based spicy side dish from Nepal 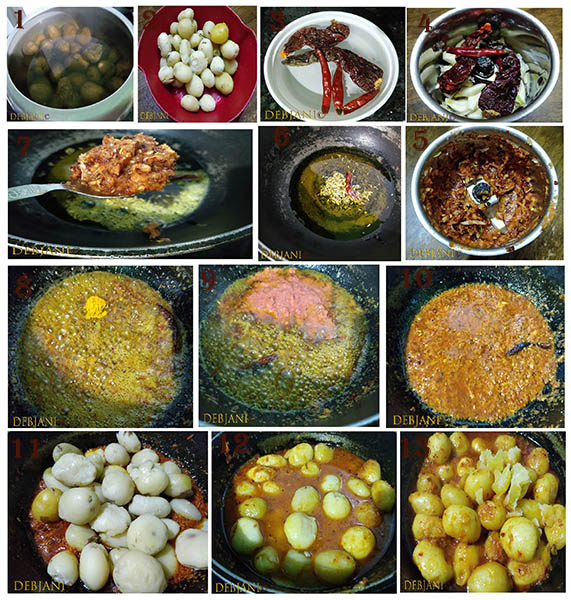 Cooking Tips by Debjani:
Panch Phoron: a mixture of Fennel Seed, Mustard Seed, Cumin Seed, Fenugreek Seed and Nigella Seed.
You can increase or decrease the quantity of Chili depending on how hot you want your Nepali Dum Aloo or Darjeeling style Dum Aloo to be.
I don't add any spice powder apart from Turmeric and Chili while making this dish.
Tomato Puree can be replaced with chopped Tomato.
If not available Whole Kashmiri Chili can be replaced with normal Red Chili.

Here goes the Christmas meal picture with Nepali Aloo Dom I was referring to in the first paragraph!

Have you tried the Nepali Aloo Dum Recipe from Debjanir Rannaghar!

Do let me know how it came out. Also, I would love to see a picture of the same which you can share here on dolonchttrj@gmail.com or on Instagram you can use my hashtag #debjanirrannaghar or can tag me at @foodofdebjani.