Again half a dozen over ripe Bananas! Hmmm that’s what I found in my fridge after returning from our Ajmer Trip last week! After seeing the bunch of bananas hubby commented on a flat note “ohh again we will be having Banana Bread with Tea!”….Well I was also thinking the same and he knows it well that I am not going to throw the bananas! 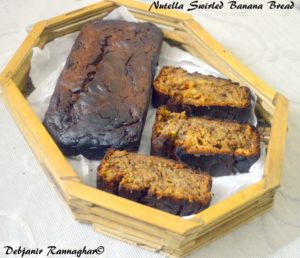 I started preparing for the Banana Bread after returning from office on the same day and when done with the preparation, I decided to add something extra to make the regular Banana Bread a bit special… On that thought, I started checking both my fridge and store and found a small bottle of Nutella! Eureka! And what else!!! Well nothing but two loaf of Nutella Swirled Banana Bread! 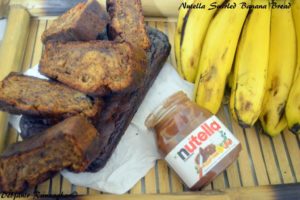 Nutella requires no intro I guess…. This heavenly Choco- Hazel Nut spread has the capacity to make any dish extra special ... extra tasty... So no more chitchat but the recipe of the super taste Nutella Swirled Banana Bread….. The recipe is almost similar to my regular Banana Bread Recipe with very little alteration to the ingredients..  Apart from this, I just have added some Nutella to it to make the bread tastier. 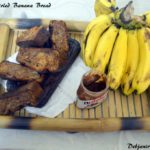 Here’s the Recipe link of Normal Banana Bread that I shared previously!