"You mean the best Dimer Halwa in the world," I asked with a smile.

"Well yes! Dimer Halwa is all about my "chotobela"; growing up in Ramakrishna Mission. Waiting for Maa to come with a Tiffin box full of the Dimer Halwa! Having it while discussing my week with her. She used to come by bus to meet me! For her, it was a journey of more than 2 hours every week! Or going home during the vacation while studying at Jadavpur University and having this bliss! Yes, She makes the world's best Halwa!" Mehebub Said.

Dimer Halua, a recipe by my MIL!

A dish, I for the first time had in my in-laws' place and was never able to re-create! Actually, she makes it better than me 🙂 . Don't think that we are having a lovey-dovey relationship loaded with the koochikoo! Nah! We are typical Mother-in-law and Daughter-in-law. Never ever satisfied with the other and happily unsatisfied with the behavior of the man we both share. However, that does not mean I don't appreciate her and especially her cooking skills. I guess she also shares the same emotion.

I was horrified when I heard they make Halwa with Egg at my in-laws'! My first reaction was "Ohh I am not going to have it!" I was not at all enthusiastic to savour the Dimer Halwa. In fact, I was not sure! I was thinking, how can one eat Ande ka Halwa! What about the typical eggy smell? In fact, why not make a simple omelette or scrambled egg instead of the Dimer Halwa?

However, after having the first bite, I immediately asked for the second serving of the Dimer Halwa. Then I had it and had it and had it! This probably is one of the perks of being married to a person who belongs to another religion! We come to know about the beauty of the other religion, their food, their culture, everything. This dish, Dimer Halwa aka Egg Halwa ( Aande ka Halwa) is an heirloom recipe I learned from my MIL!

What is Egg Halwa or Dimer Halwa?

Dimer Halwa Egg Halwa or Ande ka Halwa is a very popular non-vegetarian Halwa. This is one of my MIL's signature dishes. Husbandman thinks his mother makes the world's best Dimer Halwa and me in a way believe him just for this one delicacy 😛 . I  follow my Mom-in-law's recipe line by line as I am also a fan of this yummy dessert. This dish is a must in  “Shab e Barat” at our place and also during Ramadan for the iftar meal. My MIL makes different types of Halwa on this occasion including Dimer Halwa. however, I being lazy to the power infinite ended with just one item – the tastiest one – Dimer Halwa. 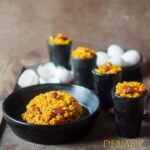 Dimer Halwa or Egg Halwa is an Indian Sweet dish or Halwa prepared with Egg. This is an heirloom recipe from my in-laws' side 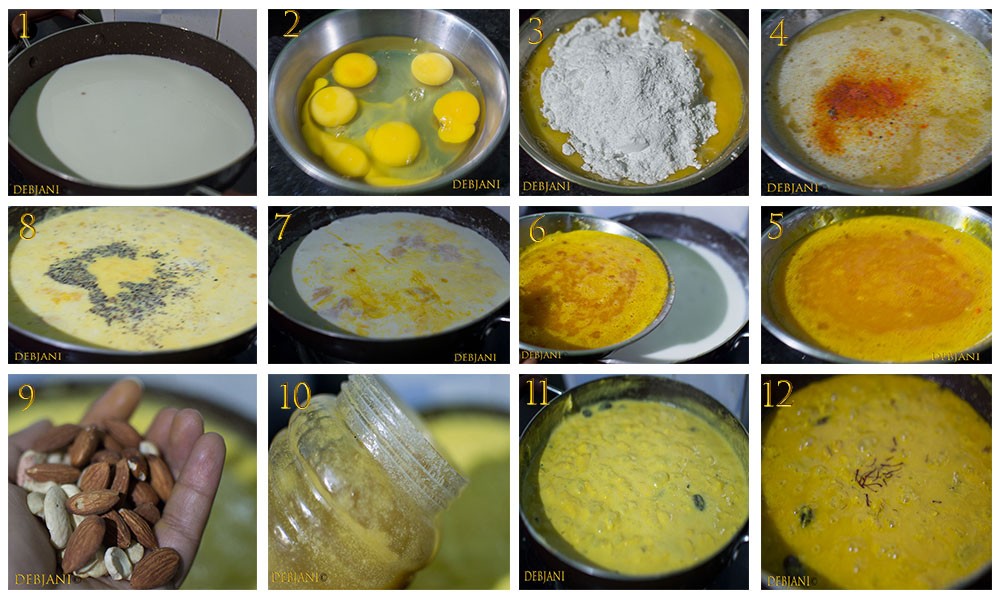 You may increase or decrease the amount of ghee based on the requirement.
Instead of full-fat milk, you can use skimmed milk.
Sugar proportion can also be increased or decreased.
You may skip the food color.
I prefer to use whole dry fruits instead of chopped dry fruits. You may use chopped dry fruits as well.
To make the Halwa richer, you may add some Mawa/ condensed milk as well.