My memory of Chicken Bharta always took me back to my college days or more specifically, the period when I completed my BSc and was struggling with the Master's course. That was for the first time I left a metro city to study Rural Management and was based in a suburb of West Bengal, Kalyani. I used to back to the city on the weekend devastatingly. The weekends used to be fun with time for me, with Sudipta and Sumit Sir, my partners in several crimes. The former is a college bestie while the latter is my “Sakha” with whom I have the relation of something alike Draupadi and Sri Krishna. The three musketeers used to visit our favorite small joints whenever I / Sudipta needed to pay for the food and the bigger one whenever it was Sumit Sir's turn to pay the bill.

The combination of Chicken chunks, Egg, and Indian rich gravy is deadly for me each time I taste the Chicken Bharta. I am not a big chicken fan until the chicken is the "Desi Chicken" with the earthiness loaded but there are a few dishes, I have cherished all through and Chicken Bharta is obviously one of those. The Chicken Bharta or Chicken Bhorta probably took the essences from the North Indian "Bharta" and Bangladesh "Bhorta" to make itself the best of its kind with its origin in Kolkata. Yes, the city of joy has its special version of Chicken Bharta which is influenced by both North Indian and Bangladeshi cuisine.

A true blue Kolkata-style Chicken Bharta is an earthy delicacy. Boneless chicken chunks cooked with  Indian spices, and Egg. the end result is amazing. The thick gravy is dominated by the tempering that is done with Kasuri Methi, Punjabi Garam Masala, and a bit of Tandoori Masala. All thanks to the Punjabi community in Kolkata, we cherish this beautiful dish. Some people prefer to use boneless chicken chunks while some use chicken strips, while I use a combination of both to make the Chicken Bharta.

Here's the recipe for restaurant-style Chicken Bharta from Debjanir Rannaghar! 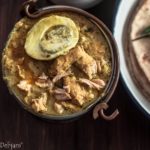 Kolkata Style Chicken Bharta, where chicken strips are cooked in a rich gravy and served with boiled egg Tandoori Chicken Masala is optional however, it gives amazing flavor to the bharta.

Have you tried the Chicken Bharta Recipe from Debjanir Rannaghar!

Do let me know how it came out. Also, I would love to see a picture of the same which you can share here on dolonchttrj@gmail.com, or on Instagram, you can use my hashtag #debjanirrannaghar or can tag me at @foodofdebjani.