Pasta turned 6th on 2nd September.  This year we have decided to not to have a party at home and the little one did not complain about the same! She was even okay with the fact that her mumma cannot take a leave on that day! Her demands were restricted to "Frozen" theme game, play dough, slime, and a sandcastle set along with homemade Bashi Pork Kosha followed by Chingri Bhapa, Ilish Bhaja and also Payesh. Following her demand, I cooked the meat and Payesh a day before though! Surprised, are you? 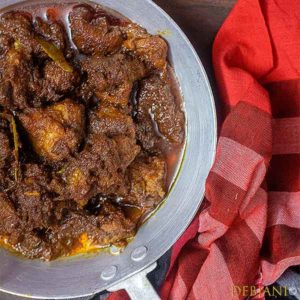 I was seriously laughing while she told us about the list! a pint-sized lady who understands the beauty of বাসী খাবার is for sure rare! Mehebub though was not surprised as according to him, his daughter at times behaves just like her mother!

Is বাসী (Bashi) Stale or Leftover?

What do you think? If you ask me Bashi (বাসী) is neither stale or leftover. It actually is beyond the definition that you get in the dictionary. Bashi is a Bengali word which means something is not fresh. Or even food that has been cooked and then given time to rest can also be considered bashi. 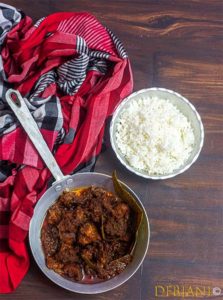 Bashi Pork Kosha and I how I got the recipe!

Talking about the Pork Kosha, the recipe is not typically mine. I have followed the recipe of the kosha pork which I had at a Picnic I attended last year. The picnic was executed by Calcutta Porkadicts, a pork enthusiast group from the city of the joy. Whenever they come up with a meetup, the food is dominated by pork. The picnic which they named Porknic was no exception. It was the pork Kosha which I liked most. 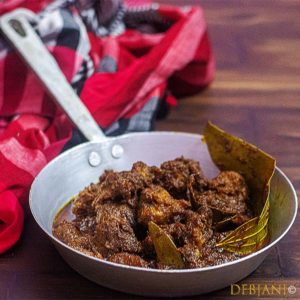 I have attended very few events organized by them and for that matter by any group. I am not a person who prefers networking much and hence meetups are not something I look into 🙂 . However, Porknic was a different case altogether. I enjoyed the first one in 2017 and decided to be there at the 2018 event as well. Thank god I was there! The Bashi Pork Kosha was worth of my pain of talking to people and also to manage the real pain of socializing.

Now that my unworthy networking power is been discussed it is time to talk about the kosha shuorer mangsho. After savoring more than three serving of the pork Kosha I decided to ask Bitan for the recipe! Bitan is the Chef and co-owner of Macazzo, a Kolkata-based Cafe. According to Pasta, they make Kolkata's best Bacon cheese fries 🙂 . He actually shared the recipe a few months back and I have made it at home several times after that. Here I must mention, I have made a few changes in the recipe that Bitan shared. The recipe that you are going to read is a mixture of what Bitan shared and my improvisation. 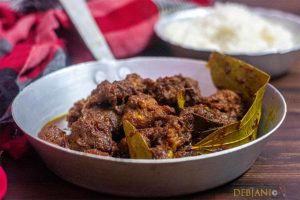 Is it necessary to make the Kosha Pork Bashi before having it!

Trust me on this! Cook the Pork Kosha and store it overnight. On the next day re-heat over a pan for around 10 minutes and have it. The resting for sure enhances the flavors.  Talking about the recipe it is almost similar to Kosha Mangsho. The key is slow cooking with the spices. 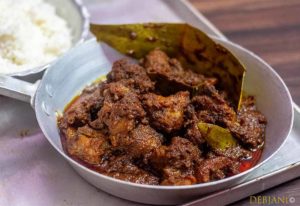 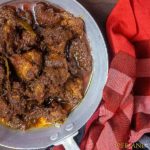 Pork Kosha is a Bengali delicacy where pork chunks are slow-cooked to the perfection with the spices.

Slow cooking makes the dish perfect.
I have adjusted the spices based on my preference.
Kashmiri red chili powder is optional however, it gives a nice color to the dish and also balances the hotness.

Here's the Pork Kosha Pin for your Pinterest Board! 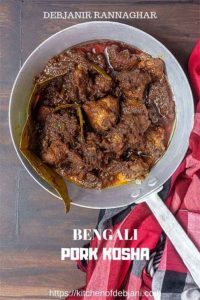