"Baba I tried Kamala bhog and failed again!" I called my father after the 2nd attempt at making one of my favorite Bengali desserts.

Baba asked probably knowing my answer, "what did you do?"

"I just made it like Roshogolla and I failed. While boiling the cheese balls, it just scattered."

"What do you mean by you just made it like Roshogolla? You are talking about Kamalabhog, right? I hope you remember the difference! Dolon you have grown up seeing the haluikor making it at home and me even"

It was then I realized my mistake! I followed the recipe of my Gurer Roshogolla and tried to make Kamalabhog! We then talked for hours. Baba was talking about Thamma and her cooking skills. He was also remembering several occasions when we used to have "Vien" at home to make Mishti.

Those who don't know, in the Bengali households, even a few years back, "Haluikor" aka the sweet makers were called during the occasions such as marriage to make desserts of a different kind. They used to come as a team. "Vien" was the common name for this system.

These days the system is almost obsolete. I don't see a team of cooks working at a marriage, living at the house, making sweets one by one following a chain! Their system was scientific and structured. They used to start with the making of Rosh aka Sheera or Suger Syrup. Three or four types of syrups were made starting with "ek tarer rosh" (single string); followed by "dui tarer rosh" (double string); "tin tar" (three strings) and "rongin rosh" (flavored and colored one). The last one was meant for Komola Bhog.

As I was saying their system was very structural back then, so I must share the details at least as much as I know. A meeting with the family to understand their need was a must. There were a few delicacies that were almost there in every marriage. Roshogolla, Rajbhog, Flavored  Rajbhog (Mostly Kamalabhog); Chumchum, Bonde, Pantua, Kalojam, Sondesh, Makha Sondesh, Soktyo Pak Biye Sondesh Dorbesh, and Doi along with Kuncho Nimki, Padma Niumki were common. Once the syrup was ready, the next process was to make Chana and Kheer using the milk.

The chana was then separated for each item. Roshogolla calls for Chana and light syrup while Rajbhog needs Semolina and stuffing along with the light syrup. Kamalabhog needed orange flavoring and also color along with the ingredients of Rajbhog!

Sondesh or Makha Sondesh needed a portion of the heavy syrup however, most of the heavy syrup was needed to make Pantua, the more fried version of it Kalojam, Bonde, and also Darbesh. I must mention Chumchum is also prepared with heavier syrup. The spare flour from Bonde and Darbesh was used in making the Nimki. Doi was of three types; Tok doi, Mishti doi for the marriage feast, and Kheer doi for Totto. Then there was Biye Sondesh. The big fat korapaker Sondesh meant for the totto. I think I haven't missed anything. Though Baba is going to read this post and hopefully after criticizing me is going to help me with some more details. By the way, I forgot Khirmohon, the one which is in between Roshogolla and Chumchum and filled with Kheer.

Now that I am done with the nostalgia-loaded details of Vien I must share about Kamalabhog. As I already have mentioned, Komolabhog is an orange-flavored Rajbhog. In this dessert, the cheese ball should not be spongy like Roshogolla. Ideally, it should be heavy and with a stuffing. The heaviness comes from Semolina aka Suji.  Commercially original orange is not used in making the mishti, instead, orange essence and food color are used.

I was initially trying to make the Komolabhog without adding semolina and also with orange instead of the essence and color. What I was getting was anything but Kamalabhog. Basically, I was following the recipe of Gurer Roshogolla! Baba told me to add suji and also to use essence and color and it worked. I must mention baba knows several intricacies about Bengali food and especially Mishti thanks to Thamma's influence. I have listed Baba's suggestions in the note section of the recipe. Though it took time, however, I really cannot complain about the recipe baba shared. In addition, the discussion was amazing for sure. It helped me a lot to draft this post. Though I know, I have written quite a lengthy one! 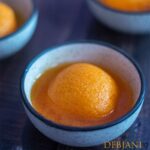 Kamalabhog is a signature Bengali orange flavored dessert which is a distant cousin of Roshogolla and first cousin of Rajbhog!

To make the Syrup:

To make the stuffing: 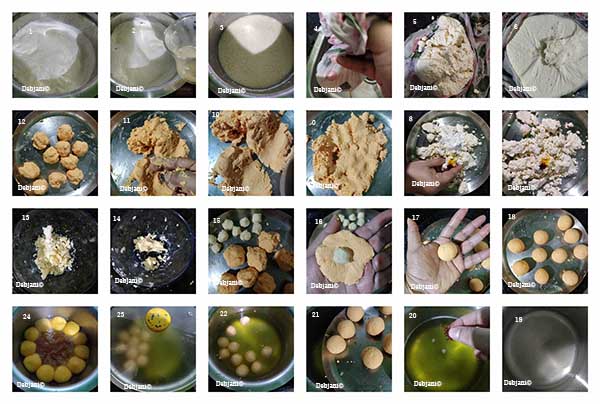 Here's the Kamala Bhog Pin for your Pinterest Board!