Magur Macher Rosha is a family favorite. I cook it whenever we pick fresh Magur mach from the market. I have a horrible experience eating Magurer Jhol all through childhood. This particular fish is considered to be good for growing kids. In my ancestral house, the kid clan had to eat a runny macher jhol aka fish curry quite regularly. I never liked the jhol ever, however, now I have started liking it once in a while. Rosha though is not jhol. Both I and Mehebub like rosha and I am not burdening Pasta with the Jire-Morich jhol as often as I had it.

Magur Macher Rosha is a quintessential Bengali Fish curry cooked with Asian Catfish aka Magur Mach. In Bengali cuisine, curries are named differently based on the spices used. In addition, based on the cut of the veggies as well. Rosha is a spicy curry where potato wedges are used. Rosha can be vegetarian or non-vegetarian. In the fish version of Rosha we add potatoes along with the basic Bengali spices.

A few things about Magur Mach aka Asian Catfish!

Magur Mach is a small freshwater indigenous fish and is popular in Eastern India as well as in Bangladesh. This fish is very nutritious and often served to Kids in Bengal which is cooked lightly with veggies that we refer to as Magur Macher Jhol. The recipe for light curry is different from Rosha and known as Jhol which I'll share soon. In Bengal, we mostly purchase live catfish which is termed as "Jiol Mach" in Bengali. Jiol stands live. The fish vendors mostly keep the live fish in a big container. They cut it when purchased and it is advisable to use live catfish instead of purchasing frozen or which is not live. 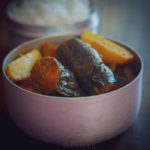 To make the spice mix:

I would love to see a picture if you are making it following my recipe which you can share here at dolonchttrj@gmail.com. You can use my hashtag #debjanirrannaghar and share it through Instagram as well. and in addition, you can tag me at @foodofdebjani.

Here's the Magur macher aloo diye Rosha Pin for your Pinterest Board!