"Maa, how do you get the recipe of Bhetki Macher Dum? I never thought of asking you though we are having it I don't even remember from when." I asked my mother after returning from Mumbai where I  had a pop-up with Madhushree at Mustard, the unsavoured Pujo pop-up. My initial plan was to cook Bhetki Begum Bahar however finally decided to go ahead with a family recipe of Bhetki Mach which is more subtle if compared to a typical Korma or Begum Bahar. This curry was well appreciated in my Mumbai Pop up and has been ordered beyond my expectations!

"Dolon do you at all love Bhetki Macher Dom?" Maa asked and I replied to her truthfully. I am having this dish for years. To me it is something so very my family-like and I have never given extra mileage to this dish. By the way, Maa never says Dum, she always says Dom like a typical Ghoti.

Bhetki Macher Dum and why it is a family recipe!

I have been eating this subtle curry with Bhetki Mach (tempered with Kalojire) for a long. Maa told me she first saw Boropishi cooking this after Maa's marriage. Boropishi (Baba's elder sister) used to be a great cook and was trained by a Khansamah during the 50s after her marriage. She was more than 20 years older than my father and married quite young. After marriage she was taught under a trained khansamah and to date is an amazing cook. She is presently in her 80s and does not cook these days.

I am well aware that Maa on and off has taken tips from Boropishi but never knew this recipe was her! We used to refer to this as "alada Bhetki macher jhol" whenever this was prepared at home. To us, it was a light curry almost "Dom" like yet cooked with fish!

Bhetki Macher Dom and why do the Chatterjee's call it Dom!

Let me tell you Bhetki Macher Dum has nothing to do with cooking on Dum! This is a typical Bengali dish from a Ghoti household where for some unknown reason we call it dom. I think it is because we use mustard oil, dry red chili, and Kalojire (Kalonji), and these spices are used in making Bengali Aloor Dum as well.  One thing I must mention here, we use a paste of boiled onion while making the Bhetkir Dum.

It is been a long I have been to Boropishi! I think it is time to go to her and let her know what I have done with her recipe!

Here's how I cook Bhetki Macher Dum at Debjanir Rannaghar! 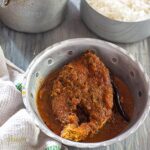 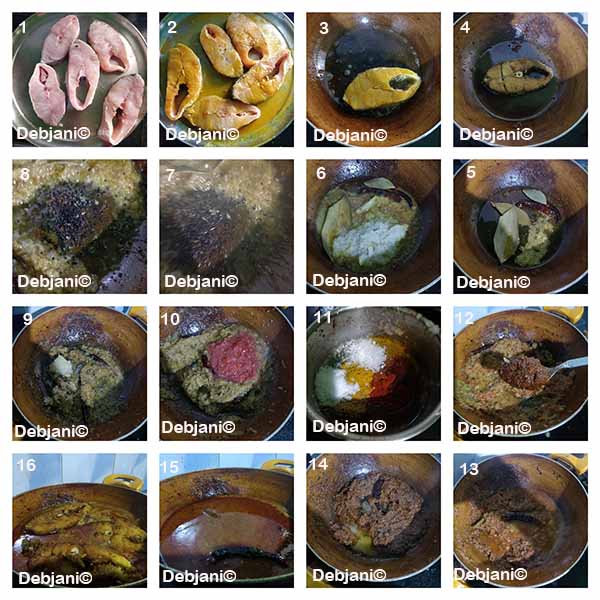 Here's the Bhetki Macher Dom Recipe Pin for your Pinterest Board!