Macher Rosha is neither a typical Bengali Macher Jhol nor Macher Kalia. This is a semi-dry fish preparation served with a tangy sauce cooked with onion and tomatoes and tempered with nigella seed aka Kalojire. In my place, we call this fish curry paka macher rosha. Paka Mach stands for big-size fish with a bigger bone. Mostly fish that are beyond 3kgs are considered Paka.

I prefer to make the gravy for this Bengali fish curry a bit on the thicker side. This is a personal choice. You can keep the curry runny as well. There's something called "makho makho" and "gorgore"  in Bengali cuisine and this is one such gorgore macher rosha! You can use Rui / Katla / Mrigel / kalbosh mach for this recipe. Pieces from big-sized fish work best for this recipe! Ask for paka mach.

It is a typical Bengali thing to cook Mach Bhat for a mundane Bengali meal and I am no exception. We as a family eat fish curry and rice at least four times a week and even more without any complaints. This is normal in a fish and rice-eating Bengali family. I or our house-help cook the general jhol, jhal, bhapa, doi mach or bhapa at home. While I cook, I prefer the elaborated dishes on weekdays. Macher Rosha is one such dish that can be cooked within 30 minutes.

You can find everything needed to whip up your very own homemade basic macher rosha. Most importantly, the ingredient list is beautifully short and basic.

Are Rui and Katla same fish?

No, they are not. In the local Bengali dialect, we refer to Rui, Katla, Mirgel, and Kalbosh as Pona Mach. They look almost identical yet they are different; both in look and taste-wise.

Any other ways to cook the Rui mach or Katla Mach or to be precise Pona Mach?

There are thousands of recipes for fish curry in Bengali cuisine Pona Mach I suppose. In some, we do fry the fishes and skip in some. The base of the gravy differs too. I will be sharing a list below.

Talking about Rasha; why this name?

Once someone told me rasha came from Rassedar which means a tangy gravy-based dish. Who knows! All I know in my family a tomato-based tangy thick curry is called Rasha. We use both fish and veggies such as pointed gourd or cauliflower in Rasha.

Yes, Rasha is supposed to be spicy though not loaded with different types of spices.

What should I serve with Kalojire diye Macher rosha?

Both plain rice and Roti go well with well-made macher Rosha. I do not like to serve it with Pulao or Paratha. 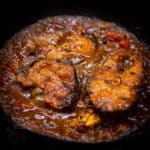 Kalojire diye Macher Rosha! Tangy Big Carp (Rohu or Katla) fish curry tempered with Nigella seed! Deep-fried fish is cooked with a tangy curry sauce and then served with steamy rice to soak it all up.

Here's the Perfect Bengali Kalojire diye Mach Recipe Pin for your Pinterest Board!