This recipe was in draft for more than one year! Though I make eggnog every year, however, before clicking a few decent pictures we got to finish the drink at home. Last week while returning from the office we picked a bottle of Bourbon as we were out of stock and then I decided to write the recipe without any fail. I am not a whiskey person unless it is used in any cocktail, I prefer gin or vodka over it, however, Mehebub loves whiskey. Coming to Bourbon, which is an American-origin whiskey, I prefer using it while making homemade egg-nog over other alcohol.

Eggnog is a family favorite. Here I must mention Eggnog can be both alcoholic and non-alcoholic. Pasta's portion obviously does not contain alcohol. she loves her eggnog a bit hot instead of chilled. It seems my six years old is already started enjoying the goodness of mulled drinks. On the other hand, Mehebub also enjoys it thoroughly. He loves anything and everything prepared with Egg and milk and Eggnog is no exception. In addition, the alcoholic version calls for either Whisky or Bourbon, or Brandy, and needless to say he enjoys his portion of all of those. On the other hand, I am a vodka person in general and don't like Whiskey or Bourbon much, however, I love Eggnog.

What's in a name!

Eggnog is an Egg-based rich milk punch that is served chilled. This drink is quite popular in Australia, the United States, and also Canada. In the said countries Eggnog is prepared commercially as well as at home. However, in India and especially in Kolkata we don't have many options for commercially prepared Egg-nog. The word Eggnog stands for froth like egg milk punch. It is said that this drink is originated from the medieval drink posset which was a hot milk-based drink. Posset was known to be a drink served to cure a cold. Later egg was added to it. Egg-nog was known to be a drink for the wealthy people considering the ingredients used. The word nog stands for "strong ale" and Egg-nog is a creamy rich drink.

Though the chilled version of Eggnog is more popular, however, it is served hot as well. Apart from that in  Venezuela and Trinidad, a cream-based liquor, Ponche Crema is prepared which is a distant cousin of Eggnog.

Eggnog or the milk punch is prepared with or without Alcohol. I make both versions at home; alcoholic for us and non-alcoholic for Pasta. When it comes to Alcohol;  bourbon, whiskey, brandy, cognac, sherry, rum, and grain; anything can be used. I, however, prefer to make it with either Bourbon or Whiskey or Brandy based on the availability of the particular variety at home. To be very frank we are not quite regular with Bourbon and hence I mostly use the other two.

Before going further with the recipe of Eggnog!

This recipe calls for raw eggs and so please make sure to purchase a good quality egg to make it. I mostly use free-range eggs while making this. Some people prefer not cooking the eggs while I prefer it to be cooked. The cooking of eggs is accepted widely to avoid any hazard which may be caused by raw eggs. 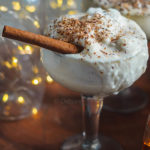 Eggnog is an egg-based drink (alcoholic or non-alcoholic) prepared during the winter. This is also known as egg punch

Have you tried the Egg Punch recipe from Debjanir Rannaghar!

Here's the Christmas special Egg nog Recipe Pin for your Pinterest Board!