I remember having Bread and Butter Pudding for the first time at Krishna Mashi's place. More than that I remember the entire process of making it. We didn't have an OTG while growing up. Needless to say, cake or pudding was not something we used to have on a regular basis. There was a round cake oven at home which was used during Christmas and I can't even remember Maa making Pudding.

My Bread and Butter Pudding experiences!

Krishna Mashi is my mother's 2nd sister. Meshomoshai was in railways and was posted at a small town in Odisha, Jharsoguda. Mashi along with the family lived there till Mesho's retirement. We used to visit them during the winter break. Their bungalow was nice with a beautiful garden and even a well nearby. I first had Bread and Butter Pudding at her place. Mashi's sister-in-law made it using a pressure cooker. I still remember the excitement of watching pudding making; the smell of vanilla, and most importantly, the fluffy and delicious pudding prepared with bread, butter, and milk. Even back then, the little me found the process comforting.

As much as I remember I had over-baked Bread and Butter Pudding for the first time at an Anglo-Indian friend's place.

I still found the process of making pudding therapeutic. The smell of vanilla soothes me. I love to wait and see the pudding in making and I love to beat and mix the ingredients with patience. Pasta too loves the entire process. Pasta with patience beats the ingredients. She helps me while making the custard. She lives to wait and watch the entire process.

What is Bread and Butter Pudding?

Bread and Butter Pudding is a British Pudding prepared with Stale Bread. The bread slices are buttered and then baked with egg custard and raisins. In India, this dish is also known as Anglo-Indian Pudding as it came into existence thanks to the Britishers and then mastered by the Anglo-Indian community.

It is not that you need to use stale bread intentionally however there is no need to discard stale bread if you have. As this pudding calls for very basic ingredients and tastes amazing. In fact, if you are a beginner in baking, this is the right thing to start with.

I make it quite often at home; whenever I have a few pieces of bread available and they are not good for making toast or sandwiches. Pasta loves it a lot.

Here's how I make Bread & Butter Pudding at Debjanir Rannaghar! 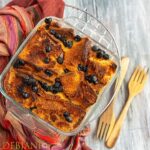 Bread and Butter Pudding is a British delicacy prepared with stale bread, butter and custard. In India, this dish is also known as Anglo-Indian Pudding 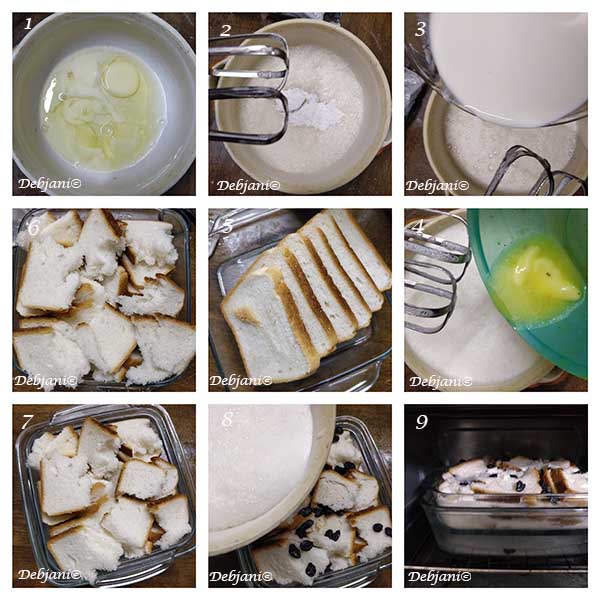 You may cut the bread edges however, I prefer to use those.
Instead of white bread, brown bread can also be used.
You can add ½ Tsp. of Cinnamon powder as well.
Increase or decrease the sugar based on preference.
Instead of an oven, you can use a pressure cooker to steam it.

Have you tried the Anglo-Indian Pudding recipe from Debjanir Rannaghar!

Here's the Anglo-Indian Bread & Butter Pudding Pin for your Pinterest Board!