Egg Tadka aka Dim Torka is a street-side special in West Bengal. The version without egg is equally good and we just call it Tadka or Torka here in Bengal. Another version that we eat is cooked with chunks of meat and depending on the type of meat used is called Mutton Tadka, Chicken Tadka, Beef Tadka, or simply Mangsher Tadka. With all these variations available I am elaborating specifically about my favorite of the lot, cooked with Egg.

Kolkata's street-style Dim Torka is a beautiful medley of cooked lentils (whole Green Moong beans or Torkar Dal mostly or whole Urad Dal or a mixture of both). I prefer using whole Green Moong beans or Torkar Dal instead of whole urad dal though. Let me tell you this Dhaba-style Egg Todka of West Bengal is completely different from the typical Tadka Dal. Though the word Todka aka Tadka is derived from tempering, however, the Torka we are familiar with here in Kolkata and other districts is not tempering but a type of Dal.

In the roadside restaurants/ Dhaba, Torka is one of the highest-selling items in Kolkata and probably all through West Bengal. the blissful, spicy Dal when cooked with eggs it turns into a heavenly side dish. With Egg or without, with meat or without, we prefer eating Torka with hot rotis and a portion of Salad.

It is almost as same as any middle-class kid growing up in Kolkata. Baba used to bring Egg Tadka at least twice a month or whenever Maa was not in the mood to cook an elaborate dinner. This was mostly after our joint family was divided. Before that, we (the kids) used to bring Torka while returning from the tuition classes to spice up the dinner. It was fun dividing one portion of Dim Torka into 4-5 members with no complaints.

Back then the shops used to provide the tadka in an earthen pot instead of aluminum foil. I still prefer tadka being served in an earthen pot. The pot absolves the extra moisture and leaves an amazing aroma.

Apart from bringing Tadka from the Dhaba, I have had homemade Tadka almost regularly at home. Never cooked with the readymade spice mix and as good as the Dhaba special Egg Tadka, I have learned from the best, our cook back then at home, Mukti Dada.

When there was no Dhaba that cooked decent Dim Torka!

What else can you expect when you live in Bihar for more than two years? I was not to expect perfect Dim Torka over there and hence I started cooking Egg Tadka or plain Tadka almost regularly. Initially, I used to use a ready mix of spices, however, at one point in time decided to make the spice mix on my own. The ritual of cooking Tadka continued when I shifted to Gurgaon after marriage as well. Though Tadka Masala was available at C R Park, however, by then I was a pro at making the spice mix on my own. C R Park though was helpful for another thing, Torkar Dal aka Green Moong beans. We used to pick a pack of 500g every month from there.

I love cooking Tadka at home. I love the flavor of the spices, especially Kasuri methi, and the entire process involved. Not that, I cook it often considering it is easy picking a portion of Tadka while returning from the office instead of cooking it. However, I cooked it on a regular basis during the lockdown and used an earthen pot the serve it. It was then I decided to write the recipe for this must-have which you should try if you haven't already. 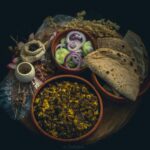 Dim Torka aka Kolkata street-style Egg Tadka is a spicy lentil and egg-based side dish and is immensely popular. Tadka is completely different from typical Tadka dal and found in the Dhabas of West Bengal

Have you tried the Restaurant-style Egg Tadka recipe from Debjanir Rannaghar!

Here's the Kolkata Dhaba-style Dim Torka Pin for your Pinterest Board!