After a hectic day at office I was not in a mood to cook a full course in Dinner instead was thinking of a pot meal that can fulfil my and Pasta’s appetite and I can have it in next morning’s breakfast 😉 ! On this thought I have decided to make some Pasta but not the typical Pasta in White Sauce which I mostly ended on! I took a packet of Spaghetti from my store and was about to take Chicken breast from the fridge for making basic Spaghetti in Red Sauce with a touch of Chicken but found few boneless Bhetki Fish chunks which I actually bought to prepare Mayonnaise Bhetki but Debjani’s cooking ventures are not typically planned

! What’s next 🙄 ! Nothing but experimenting with fish and Spaghetti and ended on a bowl full of Spaghetti with Grilled Fish in Red Sauce a.k.a Tomato Sauce! 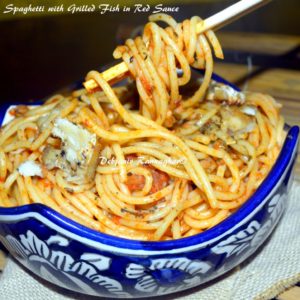 It took me less time to cook this pot meal and I have used Olive oil in it following the typical process of Italian cooking. Since I have opted for grilled fish instead of deep frying it has added health value to my dish. It is really easy to prepare Spaghetti with Grilled Fish in Red Sauce and this can not only served in lunch or dinner but a good choice for a heavy evening food or Jol khabar! 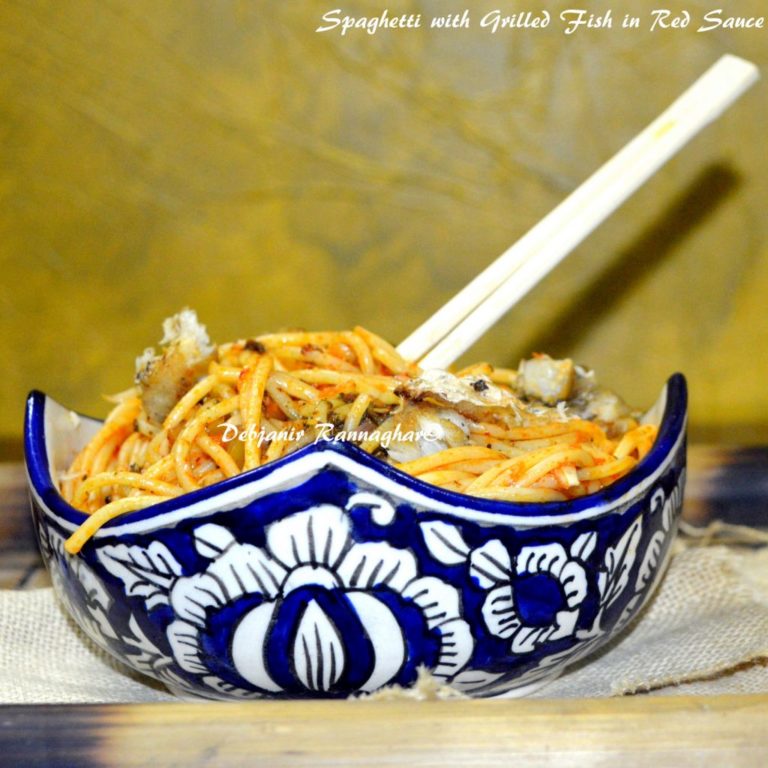 For Grilling the Fish:

For making the Red Sauce:

Making of the Red Sauce and Tossing Pasta:

More Chili Can be added while making the Sauce.
Instead of Dried herbs, fresh herbs can be added for extra flavor.
Instead of Pureed Tomato, chopped tomatoes can also be used

Recipes you may like from Debjanir Rannaghar apart from Spaghetti with Grilled Fish in Red Sauce:

More recipes you may enjoy