And my little pumpkin’s journey of listening to “Kumro Potash” started week before last week! It is truly said that time flies! She has completed two years in September and all set to join play school. However, she is not much fond of talking alike her super talkative mother and for me she is true copy of her father. I have tried with several poems including “Johny Johny”, Twinkle Twinkle” or “Ata gache Tota pakhi” but she did not reacted to any.  I was quite worried given she has not started speaking fluently and almost with a sour mind started reciting “Kumropotash” a famous Bengali Poem by late Sukumar Roy on the eve of Halloween and surprisingly she started reacting to it…”Momma Potaaaash” and proud mom with heights of enthusiasm completed the poem and ended on celebrating with Pumpkin Cupcake! Surprisingly it was Halloween on that day and My deshi “Kumropotash got mixed with the Halloween Pumpkin and served as Pumpkin Cupcake. 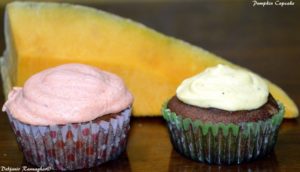 On this thought let me share some more details on both “Kumropotash” and Halloween. “Kumro Potash” is actually a famous children poem written by Sukumar Roy and is part of his celebrated creation “Abol Tabol” where Kumropotash is a “Pumpkin looking” creature. Abol Tabol is a set of   “Nonsense Poem” and for me Abol Tabol is something I want to elaborate further to my daughter to make her aware about the richness of Bengali Language. On the other hand, Halloween, is celebrated mostly in Western countries  to remember near and dear dead persons. One of the famous Halloween activities is to decorate Pumpkins!

Since both Kumropotash and Halloween Pumpkin met pasta on same day; I have decided to celebrate the day with Pumpkin Cupcake (read; a mother’s weird trick to add pumpkin to daughter’s diet). In general Pasta is not much fond of Pumpkin (this time, alike her mother) and her pathetic mother always try to find out wired ways of adding veggies to her diet. 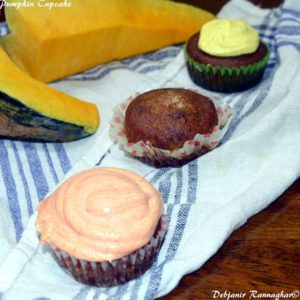 I was available with a big size Pumpkin last week and was well aware that in my absence (I am traveling this week) nobody is going to cook that in my place! Finally little effort (really little) and I ended on some super moist and amazingly flavourful Pumpkin Cupcakes with a topping of Cream cheese and grated Pumpkin and best part is pasta cherished the Pumpkin Cupcake! Pumpkin Cupcakes are both healthy and tasty and since added with a powder of Cinnamon, Ginger, Nutmeg and Clove, those emit a superb aroma upon baking. In addition, I have added some Cashew nut, Cherries and Tutti Frutti to my cupcakes. For frosting I took some Cream Cheese and mixed that with pulp of Pumpkin and then voila….

Pumpkin Cupcakes are both healthy and tasty and since added with a powder of Cinnamon, Ginger, Nutmeg and Clove, those emit a superb aroma upon baking.

To make the spice mix:

Making of the Spice Mix:

Preparing the Batter and the Process of Baking:

Making the Topping and finishing Cupcakes:

Let me end with legendary "Kumropotash"; a poem very close to my heart!