After preparing Tutti Frutti (click for recipe and further details) last week, I was searching for an opportunity to use those in cooking as well

and finally used those in  a  Tutti Frutti Cake on the afternoon of my birthday 🙂 ! No it was not my Birthday cake but a Return Cake for my little one who gifted me a Chocolate Truffle Cake this year… 😆 This year I took leave from work and was at home with Pasta… We had a typical Bong lunch with Bhat, Ghee and Aloo Shedho ....I fnally started with baking the Tutti Frutti Cake for my sweetheart .... 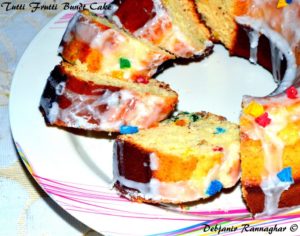 We used to have this simple Tutti Frutti Cake during Christmas in Kolkata as we were not allowed to have Typical Christmas Cake with Rum (click for recipe) at that time since Kiddos were not allowed to have anything with liquor at my place! Apart from this cake was one of the common tiffin item in Kolkata those days….Maa used to pack two slices of Tutti Frutti Cake in my tiffin box at least two days a week. Even now, I love to have Tutti Frutti cake with my morning cup of coffee...

I mostly use Whole Wheat Flour instead of All Purpose Flour for Baking and try to substitute Butter with Vegetable Oil but this time I was in a mood to prepare a rich and royal cake with dominant Indian flavour and hence opted for adding Tutti Frutti in my cake and also used Condensed milk to make it more RoyaI. Initially I was planning to make Cupcakes but then decided to use my Bundt Pan which I’ve not used since long….Last but not the least I have used Homemade Tutti Frutti in my cake! 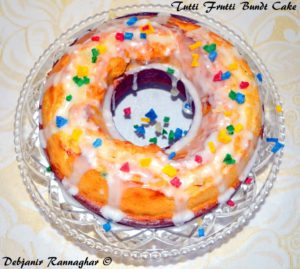 A simple yet Royal Indian Cake loaded with Tutti Frutti and Glazed with a mixture of Icing Sugar and lemon Juice along with a Cup of Coffee (little one was having milk with her portion of Cake)…. It was a relaxing Birthday evening of mine….and after that Hubby taken care of rest of the cake!

For Glaze and Decoration:

Making of the Glaze and decorating the Cake: