Many people believe that taking Saffron (commonly known as Keshar or Jafran in India) during pregnancy is very beneficial as it is effective for fair complexion of the baby!!!!! I really don’t know how far it is right…. Anyway many of my well-wishers, neighbors, friends and colleagues advised me to take Saffron for “GORA CHIKNA complexion “of the baby and one of my colleague advised me that I should contact a person from our Jammu-Kashmir Unit office for authentic Saffron as his ancestral business is of Saffron and related things. . I bluntly answered that I want a healthy baby …. Complexion hardly matters to me and with lots of anger I told her how much superstitious she is!! 💡

On that night I gave a second thought to the matter and my reaction was “bullshit!!!!!! I've done a blunder! I rejected real and authentic Kehsar from Kashmir!!!!!It would be an asset for my kitchen store

and the very next day I told that person very politely that I need saffron and her reaction was “I told you so”.. but I made her clear that I need the Keshar for my kitchen but not for my Baby's complexion... However, She helped me to contact that guy from Kashmir and requested him for Saffron…And after one and a half month of continuous waiting I received my authentic Saffron!!!!!But I have not taken a single strand of saffron during pregnancy …...Both me and Hubby have decided that I will not take anything other than medicine during pregnancy....And I almost forgot about that small box of Saffron!

My Little Girl Renaissance was born on 2nd September, 2013 and more than almost 2 months after her birth I used that Saffron while preparing “Makhmali Chicken” ....
I don’t know why even so called education people are so much bothered about the gender of the baby, complexion, features etc…. does it really matter???? 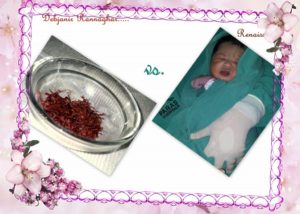 For me her smile matters, her health matters, her happiness matters and she matters ……I still remember the moment when I first saw her while lying on the operation table after C-Section; when Hubby told me that our Little one is just like me.......When I took her in my arm after getting the operation done!
Love you darling!!!!!! We are complete because of you….For me it was a battle between complexion and Parent's will power and we won it because Renaissance won the battle between “Renaissance and Saffron”.

(Pic updated after her rice ceremony)

« Renaissance ...... My daughter
Chingrir Cutlet aka Prawn Cutlet...Memories of Kolkata »