"Debjani why haven't you written about our favorite Street Food Joints in Purani Delhi!" Mehebub asked while finishing the last piece of the Tandoori Chicken at Moti Mahal!

It was a lovely afternoon on January, 18 and I was savoring the Butter Chicken while seating peacefully with Mehebub inside Moti Mahal! I never thought of writing about the Street Food Joints in Purani Delhi! There was a time when we used to visit the narrow lanes of Purani Delhi several times a month; though, never clicked a picture then or never written about the experience either. As a Non-Dellhihite we cherished every bit of exploring the city during 2010-15. A city that has given several precious moments of our life, A city love for the food and the culture.

It indeed took me long to come up with a post on favorite Street Food Joints in Purani Delhi! 🙂

We were in Delhi in January after long, for work. This time, we specifically added a day to our tour just to revisit the favorite places. In fact, we both separately visited the capital after leaving the city in 2015. Delhi has always been like my second home. It was back in 2010, just after marriage, we had shifted our base to Gurgaon. For the initial 3 years, I was associated with  World Health Organization and last two years with an economics research lab by MIT. Both the offices were in Delhi and hence I used to drive to-fro every day.  We were there for 5 long years and finally shifted our base to Kolkata in 2015. several blog posts of mine are having the details of our Delhi-days. You may check the Delhi-Kolkata Road experience here.

However, coming back to our last trip, this time again we have visited our favorite joints there. Here I am with the details. This post (on Street Food Joints in Purani Delhi) is no way a review but experience sharing by a Bong who thinks Delhi is her second home. Purani Delhi is having hundreds of Street Food Joints and to chose a few is really difficult. I am detailing a few things here, such as a bit detail about Purani Delhi, as a non-delhihite which can obviously be ignored if you know the city. 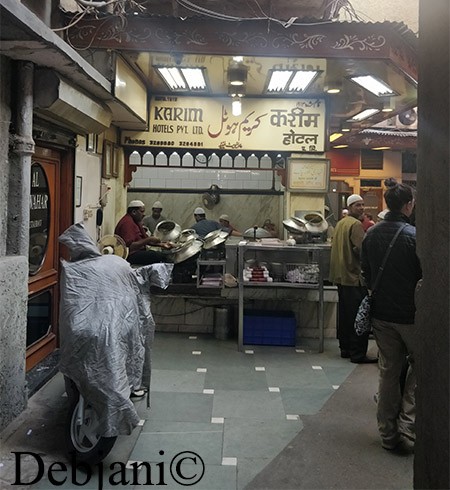 Street Food in Purani Delhi! Which areas to consider:

Without going much into the history (such as the city was founded by Shah Jahan in 1638 and initially named as Shahajahanabad or the famous areas); Purani Delhi these days having a few neighborhoods. The main Road is Chandni Chowk and the northern part is known as Dariba Kalan. Then there is Jama Masjid and Dariya Ganj area and also Chowri Bazar. All the mentioned areas are known for the immense presence of Street food joints. This map may help to understand the area!

For me, Purani Delhi is actually a city within the city, the heart of the capital. The food Joints I am mentioning here, are mostly the cults. However, I will be trying to make a few listing below so the ease of the readers.

After all, the discussion started over there, needless to say, this is the first to be mentioned. A global chain now, Moti Mahal was founded by Kundan Lal Jaggi in 1947. It is said that they are the first to set the infamous Tandoor and was the inventor of Tandoori Chicken. You may read about Tandoori Chicken here. Butter Chicken was another dish we now are having thanks to them! 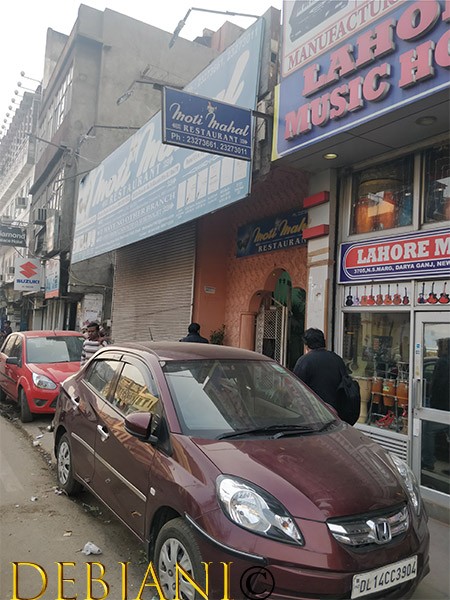 I don't know about others, however, we stick to the Tandoori Chicken followed by Butter Chicken and Tandoori Roti whenever we visit Moti Mahal. the ever-welcoming atmosphere followed by the juicy Tandoori Chicken (and the smell of clay-oven burnt chicken), it works for us; always. The Butter Chicken is how it should be; soft chunks of chicken, the creamy rich gravy with the subtle presence of spices. 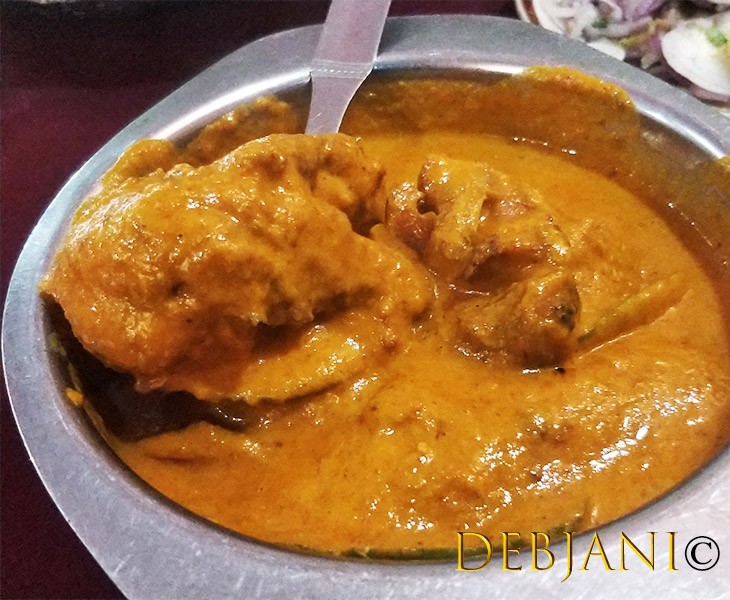 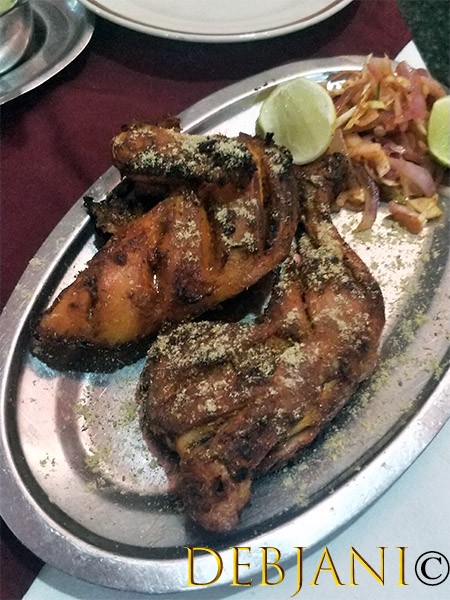 Hardly, 500 meters from Moti Mahal, Changezi Chicken serves Changezi Chicken amongst other dishes. This is a never-missed joint while considering Street Food Joints in Purani Delhi!. This place is worth visit. The combination of tangy (sour in fact) gravy and well-cooked chicken goes perfectly with freshly prepared Roti. Personally, I like their Chicken tikka as well.

How can I not mention this cult joint while writing about Street Food Joints in Purani Delhi!? More than 100 years old, Karim's was founded by  Haji Karimuddin in 1913. Probably, one of the Delhi's most famous Non-veg destination, Karim's serve Tandoori Bakra (whole Lamb) upon special order. You may have to have a group of 8 to finish that considering there will be other sides. In Karim's. However, for us, their Mutton Stew, Brain Curry, and Burrah Kebab work well. I found the Biryani over-hyped though. A must visit place for the Mutton Tbrain curry for sure. In addition, if you are visiting in Winters, try to be there early morning to savor the Paya and Nihari. 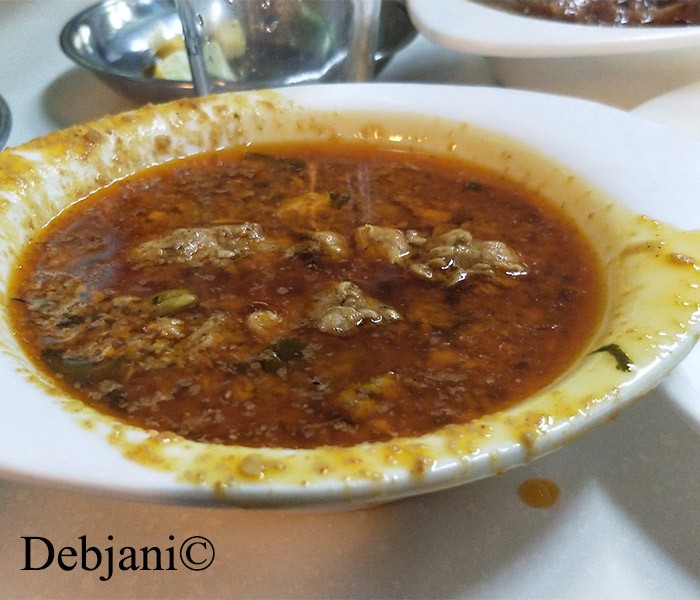 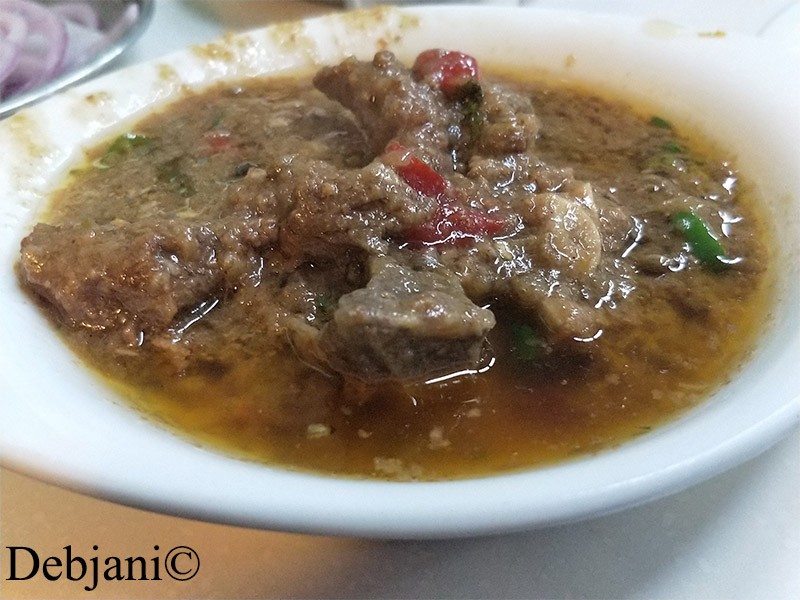 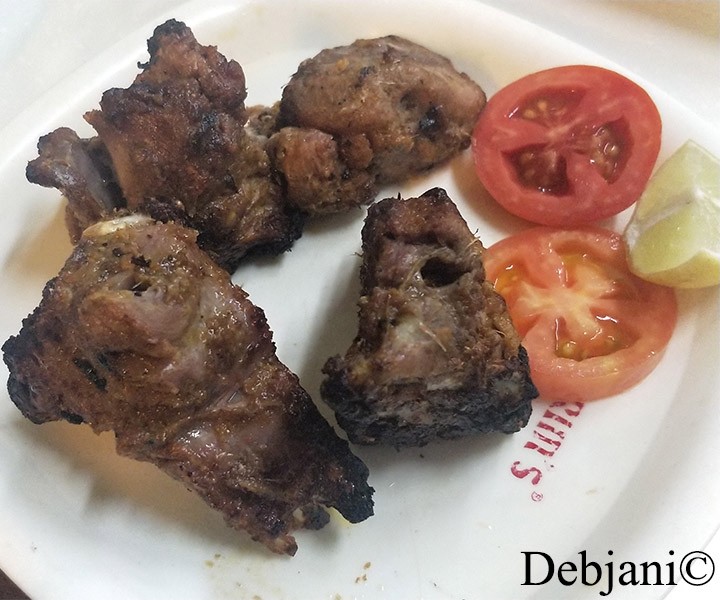 One of the oldest and famous sweet shop in Delhi, Chaina Ram is famous for their Karachi Halwa. Again a cult shop that was established in 1901. the area is clumsy and hence it is better to avoid to take a car while going there. You may get two varieties there, the normal and special (with added dry-fruits). I may suggest going for the special one. For further details about Karachi Halwa (especially the recipe), you may check this post. Apart from the Karachi Halwa, I love their Sohn Halwa and Mung Dal Halwa. It is better to order in small portions, given most of the dishes are laden with ghee. Whenever I go there, I don't forget to purchase the Karachi Halwa box. 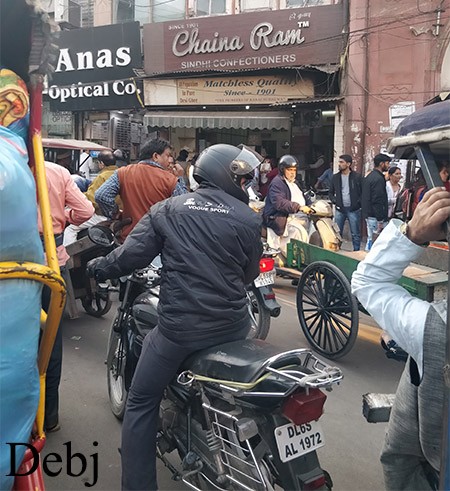 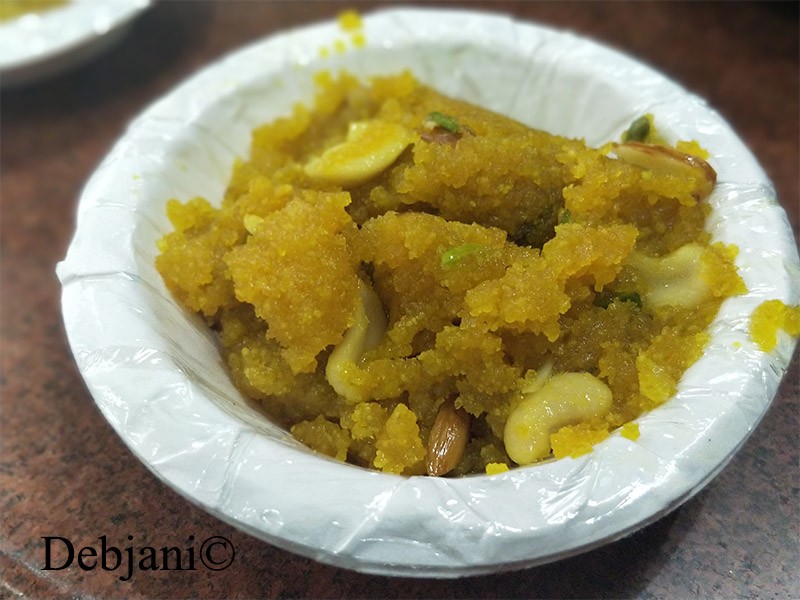 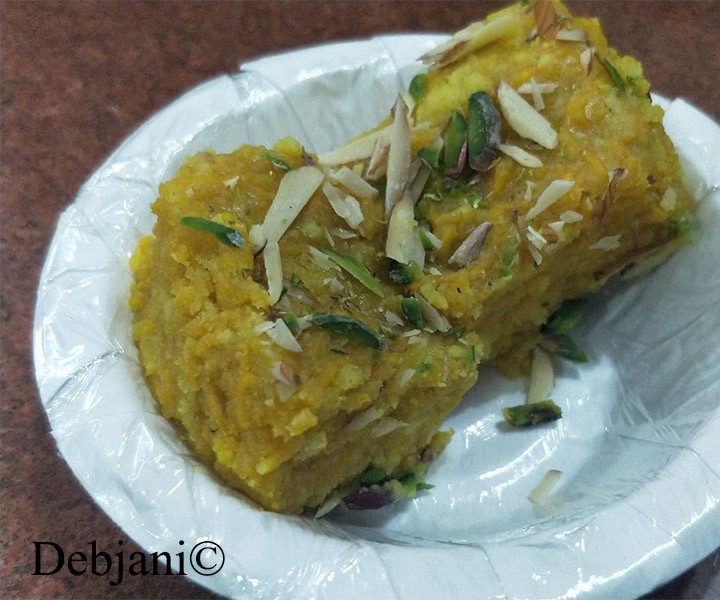 Almost walking distance from Chaina Ram, Gyani's Di Hatti serves Delhi's best Rabri Faluda; period.  A big glass full of thick and rich Rabri and Faluda is bliss. However, it is better to divide one glass Rabri Faluda between two. This dessert is quite heavy and a bit tough to finish. 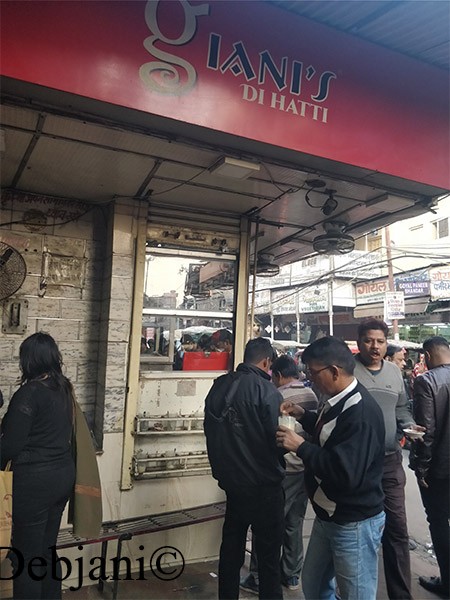 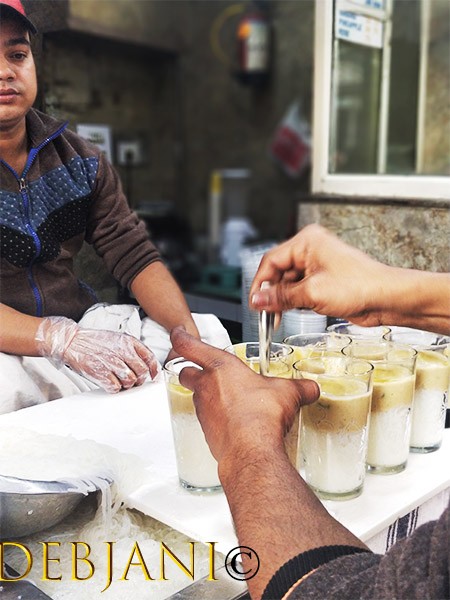 Adjacent to Gyani's Di Hatti, there is Kake Di Hatti. One of the best place for Paratha even considering the Paranthewali Galli. Again one stuffed paratha is enough for one. I prefer their simple Makkhan Paratha while Mehebub loves the Paneer and Gobi Paratha. 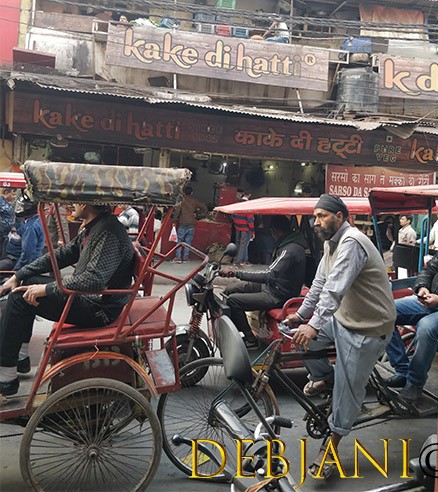 Another shop worth visiting in Chandni Chawk. Jalebiwala sells Jalebi and that says it all. I was not able to click a picture here, such was the rush! If you ask me, I can visit Chandni Chowk just to have the Jalebi here.

A joint selling the things they are specialized with for more than 100 years needs no introduction. This shop in Sita Ram Bazar is another cult selling Kulfi singe ages. We both prefer our Kulfi simple and generally don't try the other variants available which are equally good. 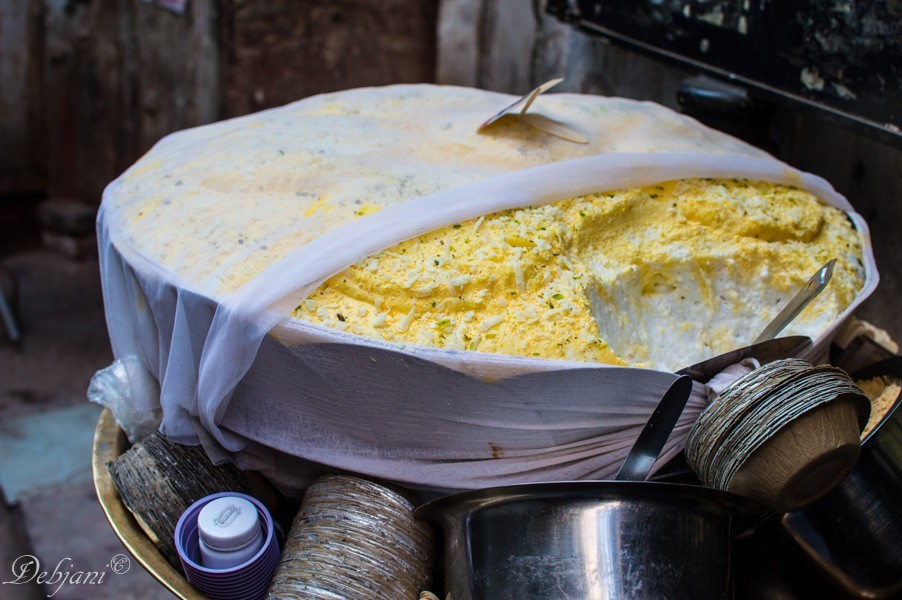 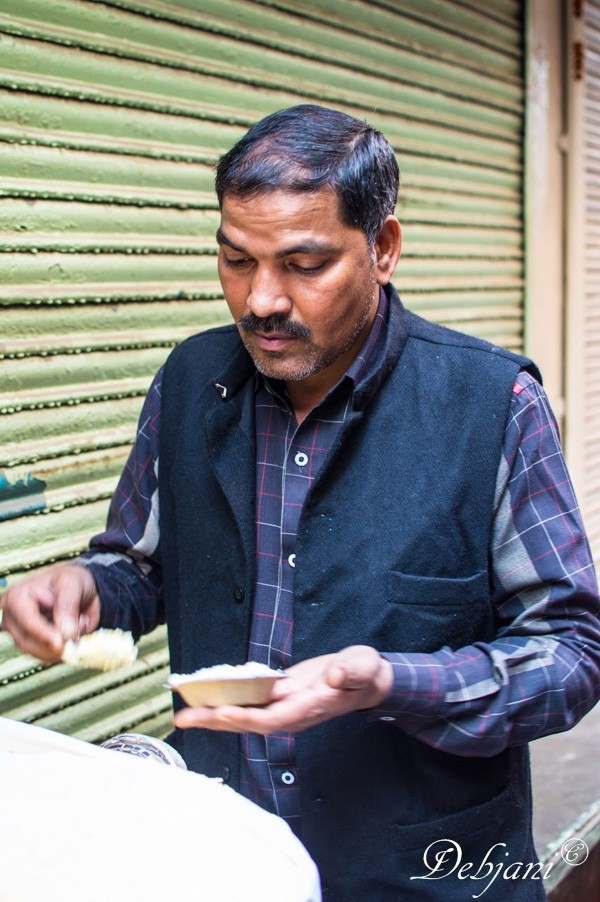 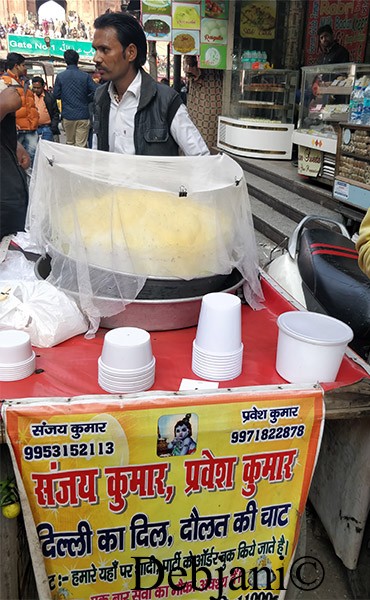 This post on Street Food Joints in Purani Delhi is written based on my (read our) experience of visiting the places mentioned. I have skipped several joints given I don't have the pictues 🙂 .

Needless to say, this post will be updated as and when a new place will be added to my list or as and when I will be available with the pictures.

Do let me know what are the places I must include in my Street Food Joints in Purani Delhi listicle.

Also, I would love to see a picture of the same which you can share here on dolonchttrj@gmail.com. On Instagram you can use my hashtag #debjanirrannaghar or you, in addition, you can tag me at @foodofdebjani.