My frequent official visit to the Southern part of the country (especially Kerala and Chennai) has helped me to taste some amazing delicacies from there over the years. I was fortunate enough to meet local people over there. It was amazing to try the delicacies prepared by the locals. I always found there are similarities between Bengali and Southern Food. This is probably because both the areas are adjacent to the seashore. Though I am generalizing South here; actually, state to state variations are huge. The way coconut is used, or the use of meat and fish and even the vegetarian items; the similarities are several. However, this post is not about any recipe but a South Indian Speciality Restaurant of Kolkata. The Coastal Matcha, one of my favorite destination for my portion of Mutton Ghee Roast (check my recipe) especially when I am not cooking it myself. 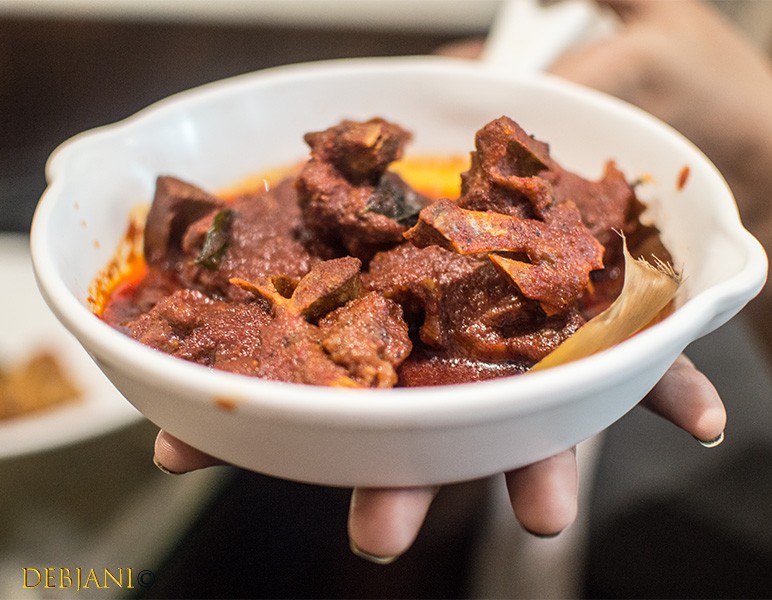 A cozy, mid-range Coastal food joint located at Southern Avenue, The Coastal Matcha is owned by Sabrina and Piyush. The former is a bong but was in the southern part of the country for long and naturally knows the southern Food. The later is the Chef as well as a Keralite and hence Knows the flavors of the Coastal area. With very minimalistic decor the place is great if you want to cherish some coastal delicacies in Kolkata.
I am quite regular there at The Coastal Matcha.  I, though, prefer to pick the food from there instead of seating and eating. The reason behind is their late delivery of food. However, if I overlook the late servicing part, I cherish their coastal offerings a lot.
I have visited the place a month back with a group of foodie friends from KFF and had an amazing selection of Coastal food. Our menu was pre-set and an elaborate one. I actually was waiting for an elaborate meal to come up with a review of The Coastal Matcha given whenever we order food for the family we ended on having the Ghee Roast (both mutton and Prawn) or the Sukka along with some Appam or Parota.
Coming to the spread we tasted on that particular day, my meal started with the refreshing Cokum Sherbet. I though prefer mine a bit more sour but the Sherbet served was decent enough. However, I fail to understand why the Sherbet was served at room temperature! It could have been much better if served chilled.
As the starter, there were 4 items, 2 non-vegetarian, and 2 vegetarians to cater the mixed group of around 15 people. The Mutton Pepper Fry and Bhetki Rava fry were from the former lot. The Mutton Pepper Fry was perfect to my taste buds, loaded with the aroma of Kerala spices and Pepper. However, I found the Bhetki Rava fry a bit dry.  I found both Mushroom and Baby Corn Masala Fry and Garlic and Curry leaf Paneer from the vegetarian spread good.
I found the Mutton Ghee Roast best of the lot along. I had it with the Appam. Perfectly cooked, soft chunks of mutton, loaded with Ghee and flavorings the dish is worth having for sure. Sukka is another dish, worth having at The Coastal Matcha. I had the Prawn Sukka with Malabar Paratha and it was a nice dish indeed, a semi-gravy with medium sized prawns flavored with Mangalorean spices. The Sri Lankan Chicken Curry was a bit flat taste-wise and not much to my liking. I found the Veg theyaal quite good and flavorful as well.
I must mention the Appam and Porota separately. Kottu Porota is something I love a lot and The Coastal Matcha makes the authentic one and so the Appam is. Both go perfectly with the Coastal delicacies.
Our meal ended with two types of dessert, Parippu Payassam, and Coconut Pudding. The Payassam was subtle and flavored with jaggery. If you prefer your dessert a bit high on sweetness, then the payassam is the perfect choice for sure. The Coconut Pudding was tastewise great but I would have liked it more if they served it chilled instead of the room temperature Pudding.

When it comes to the typical Southern delicacies in Kolkata, The Coastal Matcha is one of my favorite destination. The only thing I found required improvement there is the general service and service time.

Disclaimer: This was a self-paid visit to The Coastal Matcha.