We not only celebrate Durga Puja; we actually breathe it! For the Bengalis, Durga Puja is more than culture and beyond religion. These four days are probably the loveliest part of the year to us. Our Puja is not to mention kind of incomplete without good food and naturally, we prefer to no to think about the calories at least those four days. Be it home cooked or be it something from a fine dine or even a budget restaurant we prefer to opt for something special during Puja. On this thought let me share what I have sampled during last two weeks at different fine-dines in the city of joy as part of their Puja special offering.  The places I have visited this year are some of the heritage and finest dine spaces of Kolkata and this post is following a chronology of dates starting from the first one visited and there is a special mention as well! 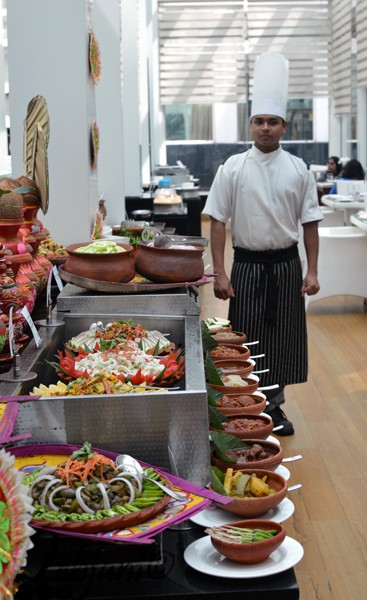 At Great Eastern, my day started with chitchat at tea launch followed by extended Bengali lunch at ALFRESCO and another level of “Adda” with the city bloggers all through the afternoon.  The lunch was an elaborate affair with numerous options however I restricted myself to Shukto, Pora Mangsho Salad, Phulkopir Paturi, Parshe Kasundi, Mursidabadi Morog Pulao, Mutton Goalondo Curry, Kankrar Jhal, Shapla Chingri, two types of Chatney and obviously assorted sweets and believe me, there were more than double items there but I was completely done after having what I have mentioned . 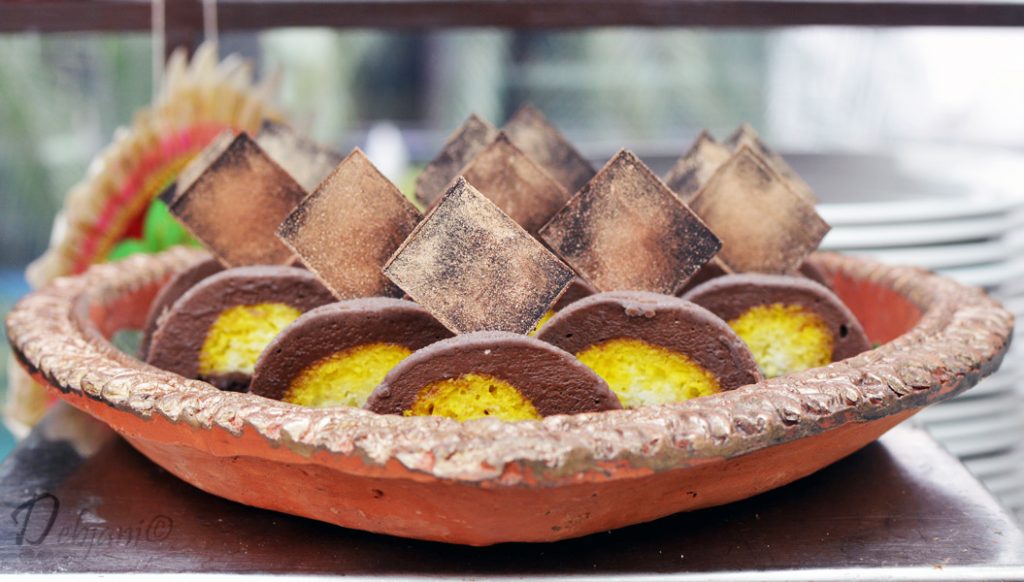 Great Eastern is offering both Ala Carte and Buffet this year at ALFRESCO and WILSONS and the price is INR 2000 All Inclusive for the Buffet at WILSONS while at INR 2250 All Inclusive at ALFRESCO. They are having a special lunch buffet along with a tour of the property at the Great Ball Room on Saptami Asthami and Nabami. However, what I found lucrative out of their various offerings is the Special Celebration Midnight buffet priced at INR 999 All Inclusive which is indeed a perfect deal after pandal hopping all through the day and this is inclusive of a Bengali Spread, Hukka zone, Tapri chai set up and music and will be available from 12 o’clock till 3.30 a.m. 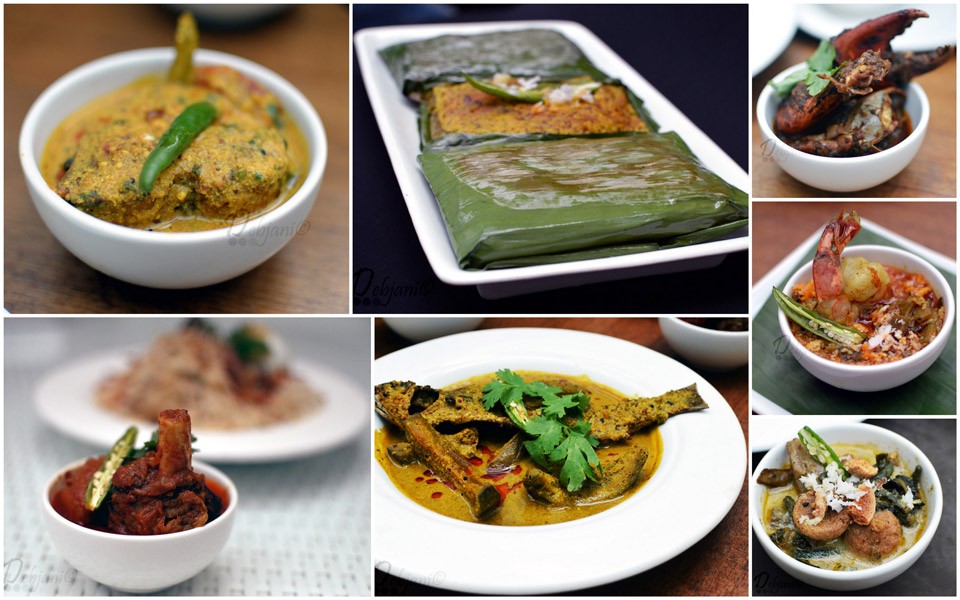 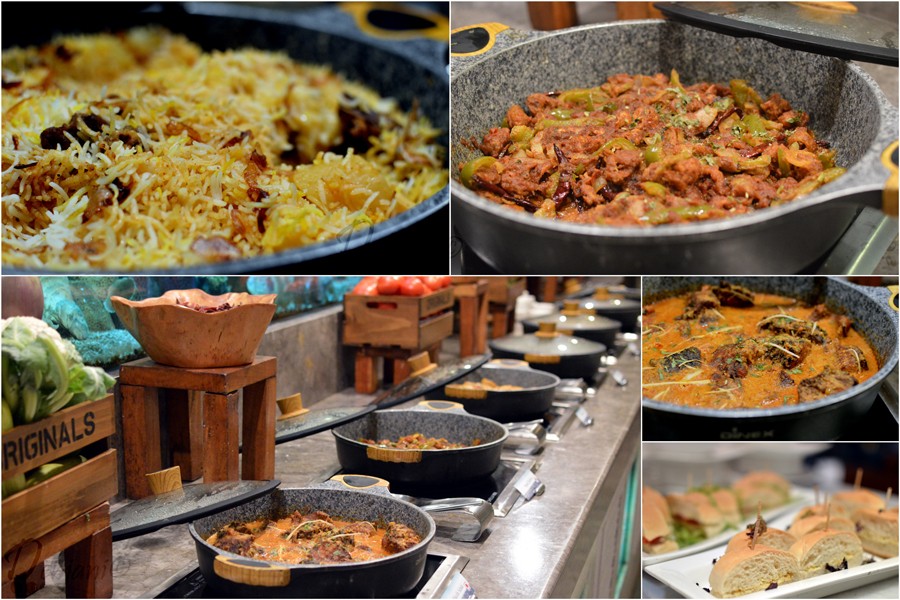 The next I visited was Peerless Inn. No, I haven’t had the dinner at Aheli as expected instead it was at Oceanic. For me, it was a quick relief as Oceanic is up with their general buffet with mostly Indian items and not typically Bengali food and it was quite a sumptuous one. They are having a live Kebab counter there and have the option for both veg and nonveg and apart from that, I found the salad counter quite impressive. As the main course, there was Mutton Biriyani followed by typical North Indian delicacies and a decent dessert counter. Those who are not wanted to opt for a Bengali feast can choose Oceanic for sure where the buffet is priced at INR 1475+ taxes. 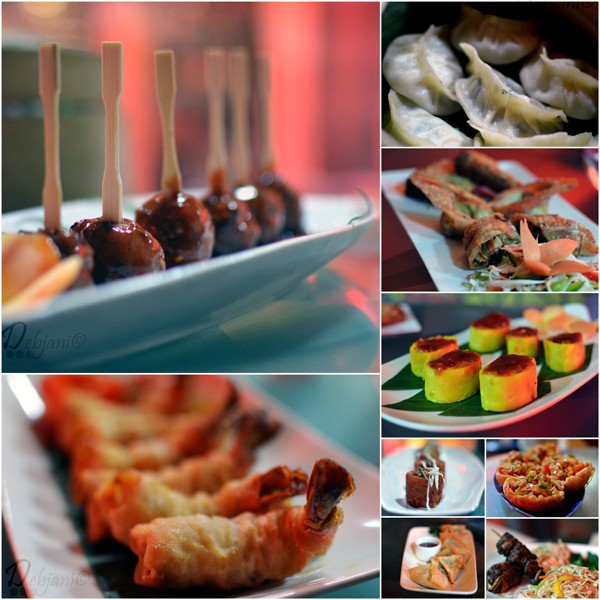 We were given a tour of Aheli as well as Ego and elaborated with the offerings there will be during the Pujo. Aheli being one of the known and oldest one to offer decent Bengali food and this year also they are offering their elaborate Bengali spread at a price of INR 1255+ taxes and there is a vaster menu that is priced at INR 1895+ taxes. Aheli Axis is offering “Sharodiar Bhuribhoj” at a Price of INR 1325+ Tax and Banquette buffet is available at INR 1475+ taxes and in case you wanted to opt for your portion of Beer then they are having an option NR 1995+taxes. Last but not the least a Chinese buffet will be available at Ego, the retro launch at a price of INR 1325+ Tax. Here’s the link of one of my post on Ego, just in case you wanted to know the offerings in brief. 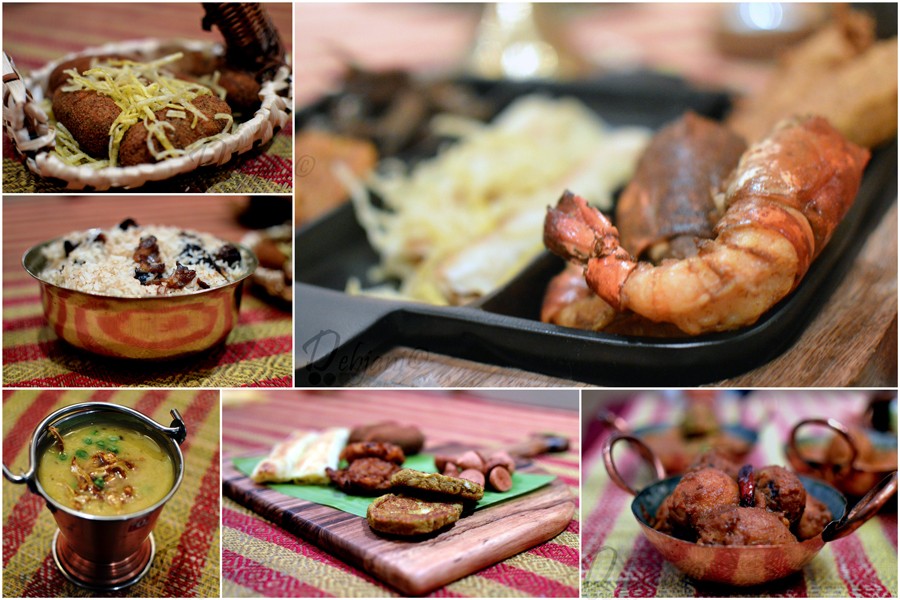 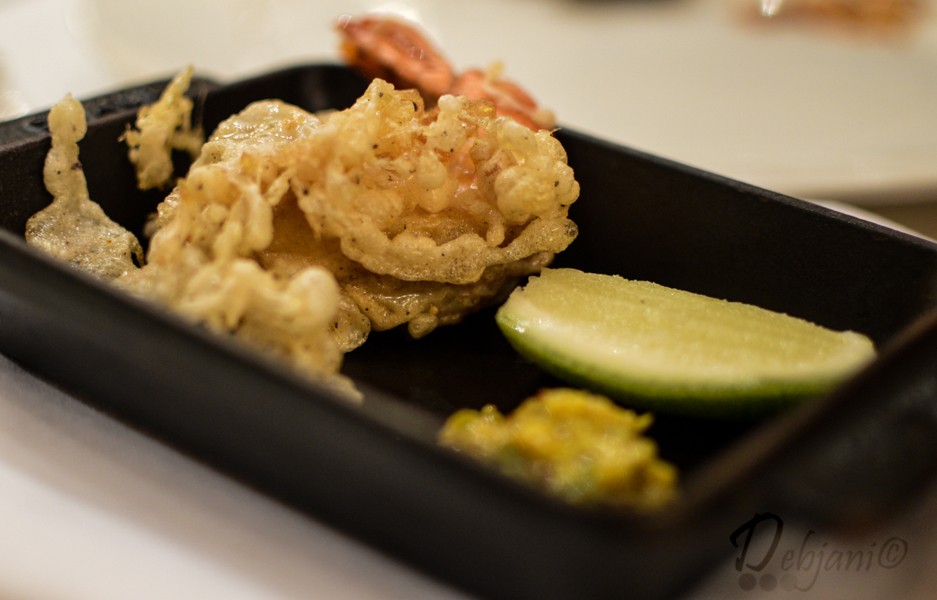 The Oberoi Grand’s “GRAND PUJOR MAHABHOJ” is a grand affair indeed. The spread was provided to us at Gharana and it was a perfect afternoon along with the slow cooked delicacies and Homestyle sweets over there. Our sampling started with Prawn Kabiraji followed by authentic Bengali dishes that includes Shukto, Moong Daal, and 5 types of Bhaja, Aloo Posto, Kosha Mangsho, Chitol Mach, Ilish Paturi, Murgir Pulao, Luchi, Chatney, Papad and choice of sweets. The Kosha Mangsho complemented with Luchi was for sure the best dish served to us. Chef Saurav conveyed that they had slow cooked lamb instead of mutton to get the perfect Kosha Mangsho. Prawn Kabiraji was another item to cherish for followed by the Homestyle sweets where the no-nonsense Rajbhog, Khirkodom, and Rashmalai are worth mentioning. 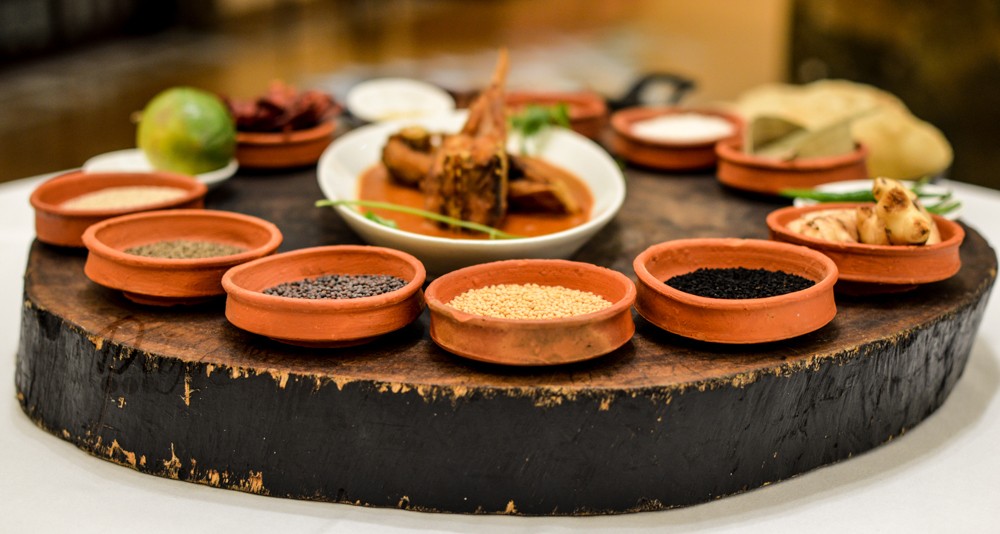 Grand’s elaborate Bengali buffet will be available from 8-11 October 2016 for Lunch and Dinner buffets on 8, 9 & 10 October. They will be having a Bijaya buffet on Bijayadashami i.e. 11 October. They have priced their buffet at INR 2250+ taxes. 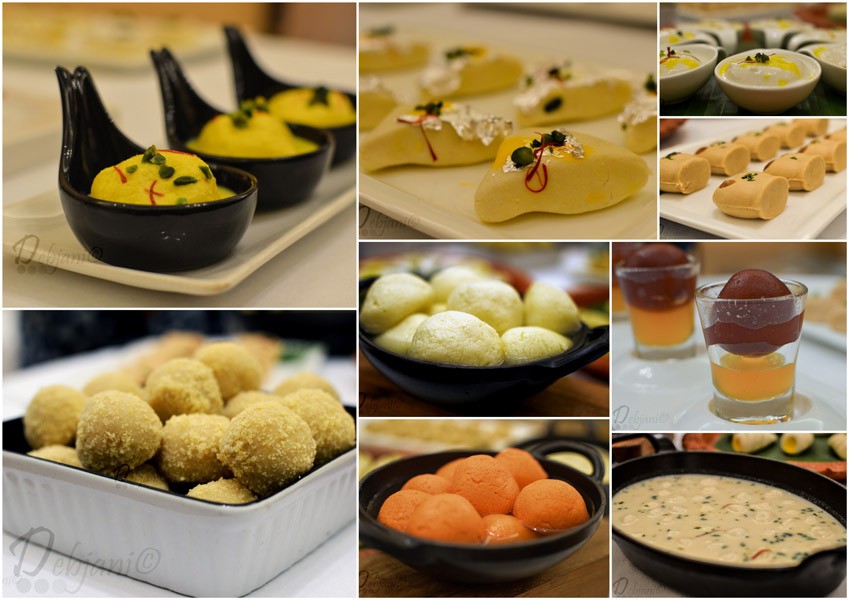 To celebrate the homecoming ITC Sonar crafted their menu with authentic Bengali delicacies and their elaborate Mahabhoj will be available at Eden pavilion starting from 8th till 11th October. They have priced the lunch with two options: INR 1850 + taxes and INR  2500+ taxes with premium beverages Dinner is priced at INR 2150+ taxes per guest with soft beverages and INR 2750+ taxes per guest with premium beverages. Apart from the Pujo offerings regular options at Pan Asian, Brunch, West View Bar & Grill, Dum Pukht and Peshawri will be up during the Puja. 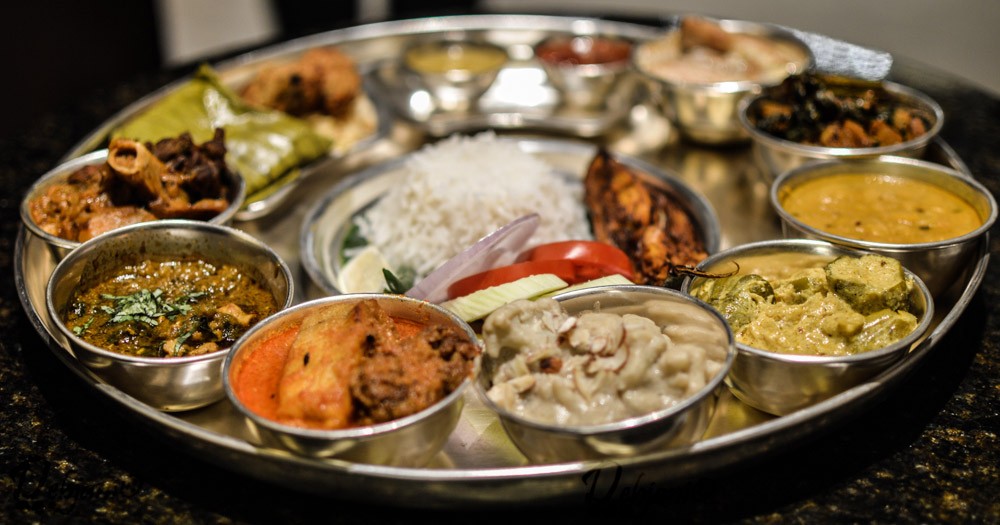 Coming to my experience sampling the puja fest at ITC, I found most of the items prepared with simple spices and with a touch of home cooked food. Bhetki Paturi, Chanar Paturi, Vegetable chop, Mangsher Jhol, Chingri Malaikary were worth mentioning for sure. 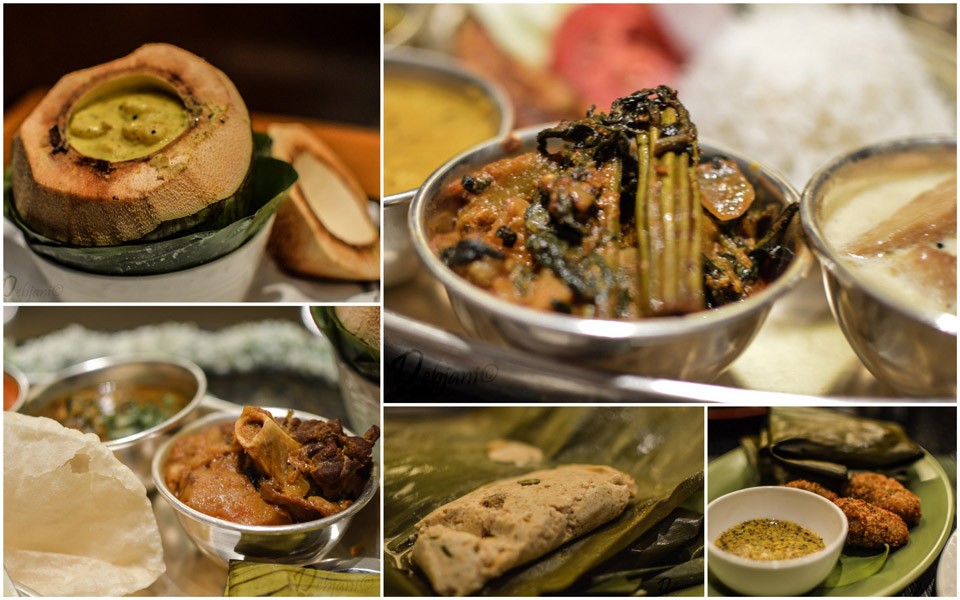 Novotel’s Chef’s Pick for Durga Puja is Anarash Bata Ilish and Roshogollar Dalna and they will be having several Bengali delicacies to offer all through the Puja.

Coming to the special mention, a food blogging workshop was organized by Social Bong at The Aauris and it was powered by Zomato. The Aauris came up with their Bengali spread for the lunch which was indeed a vast affair. My special mention goes for the “Bhorta” spread, Mangsher Chop, Dimer Chop, Bhetki Paturi and Cholar Dal along with the Chanar Payesh. The Aauris’s Bengali buffet is available at a price of INR 599 for now.

Now it is time to say sayonara to my readers and do let me know how your experience at the places I have mentioned here just in case you have a plan to visit any of the mentioned places and others as well.  You can comment here or can visit my Facebook page or can even contact me through my twitter handle! Wish you all a very happy DUGGA PUJO!

Disclaimer: Debjani was invited to dine at The Lalit Great Eastern Kolkata, The Peerless inn, The Oberoi Grand, Kolkata, ITC Sonar, Novotel and the Aauris.