I had Besan ka Sheera for the first time at Paramjeet auntie’s place who was a neighbor of mine in Gurgaon around three years back. I went to auntie’s house to buy some candles from her small boutique during winters. I  was suffering from rough cold at that time and instead of serving me tea or coffee auntie prepared some Besan ka Sheera and asked me to have it hot! It was a bowl full of semi thick Halwa prepared with Besan and loaded with ghee and at that time I was not in a mood to have anything sweet! I asked for some hot coffee but Auntie told me about the specialty of this Dessert prepared with Besan!  Besan Ka Sheera is a traditional dessert mostly prepared by the Punjabi’s and is considered as a home remedy for Cough and Cold! I didn’t believe at that time that a dessert can cure a cough and cold but I was nothing but wrong! It has done a miracle and I got relief after having this amazing dessert from a pathetic cough! 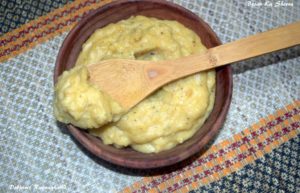 No wonder I then asked  Auntie to share the recipe for Besan ka Sheera and Auntie shared it willingly! From then, I made it many time whenever any us suffered from a cough and cold! I made it last week given my Baba and little one were suffering from a cough and cold and the Sheera did the wonder again and I decided=- to share the recipe with my readers especially who are not aware of this amazing home remedy.

Besan ka Sheera is basically a semi thick dessert. Consistency wise it is placed in between Halwa and semi thick Soup. Though some people prefer to have a bit runny version of this and they have it like a thick drink but I prefer to prepare a bit thicker version. Though dry fruits can be added to the Sheera to make it richer but I prefer to avoid adding dry fruits especially while I prepare it as a medication to a cough and cold. 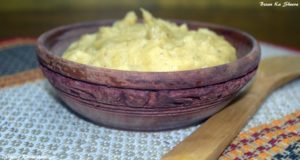 Besan ka Sheera: A traditional yet sure shot remedy for Cough and Cold!

Instead of Powdered Sugar, normal Sugar can also be used.
I have not added dry fruits which are optional.
I prefer to use homemade Ghee for this recipe.