To my anonymous friend… who send me a request mail for Rajma‪ Chawal with a ‪‎Bong twist…. My bong tummy would not consider Rajma Chawal as a comfort dish but my bong heart would do it after having a sip of Aqua Ptychotis a.k.a Jowaner Arok after a bowl full of Rajma Chawal and that's what I called a Bong twist…

We bongs consider Aqua Ptychotis as the BAAP of all digestive aid 😯 and hence having Aqua Ptychotis after having tadka wala Rajma Chawal is equal to highest level of comfort 😆 ….. Now you may ask why I am writing about Aqua Ptychotis while elaborating Rajma Chawal! So the reason is this famous North Indian dish Rajma Masala is considered not so good for digestion but who cares about digestion while this dish is too much tasty….and probably the taste is the reason it is considered as a comfort food along with Steamed Rice….. 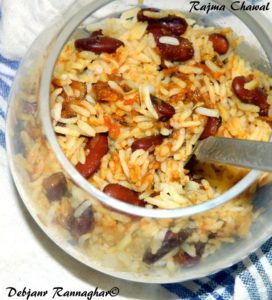 Coming to Rajma Masala…. It is a typical traditional Punjabi Dish prepared with Red Kidney Bean in almost every North Indian Family and equally popular in Restaurants too. Taste wise both homemade and Restaurant versions are equally good and what varies is the use of the amount of spices… Mostly served with Steamed Rice a.k.a Chawal (Garam Bhat) Rajma is prepared using Indian spices that includes Punjabi Garam Masala, Cumin and Ghee. I’ve tasted both homemade and Restaurant version of Rajma many times and prepare it often at my place. My recipe is a combo of both the version and I prefer to use medium spices while making my Rajma Masala. I love to add little Sugar in my Rajma (like every single Bong) and also add Asafoetida or Hing in the tempering which is not used in the typical recipe.. 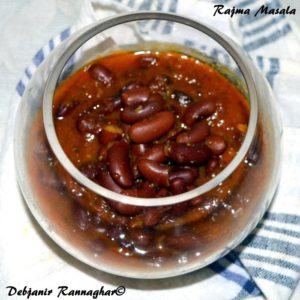 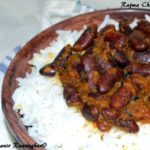 *Adding Tea Bag while boiling Rajma is optional. It gives a very good colour to the gravy